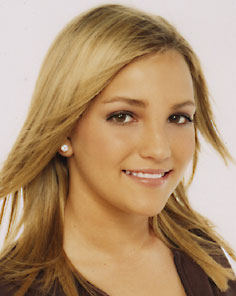 Spears, here seen impersonating her older sister Britney when she was NOT pregnant.

Jamie Lynn Spears (born April 4, 1991) is an American actress, singer, and the younger sister of pop star Britney Spears. She is best known for playing Zoey Brooks on the Nickelodeon teen sitcom Zoey 101, for getting knocked up, and for getting the show cancelled due to her pregnancy.

Jamie Lynn Spears was born in McComb, Mississippi to Jamie and Lynne Spears, who couldn't think of an original name. She attended school in McComb at Parklane Academy, where she was a cheerleader and basketball player. "She always liked shaking her pom poms and playing with balls," said older sister Britney. "That's why I call her my Mini-Me."

Spears finished her education there via online correspondence, and received her GED in February 2008 from Barbie High School of Kenwoody, Louisiana.

For the religious among us who choose to believe lies, the self-proclaimed experts at Wikipedia have an article very remotely related to Jamie Lynn Spears.

Spears made her acting debut with a cameo role in the 2002 film Crossroads, which stars elder sister Britney Spears. Based on real life, Jamie Lynn plays her sister's younger clone.

Following her success as a television star (described below), she appeared in her second film, The Goldilocks and the 3 Bears Show. Her costars in the computer animated movie include Brooke Shields as Ruby Bear and Tom Arnold as Pedobear. The 2008 DVD presentation is a take-off of the original story and "Big Brother"-like reality shows. In an acting stretch, Spears plays Goldilocks, a young blond television starlet who likes sneaking into other people's beds.

Spears was a regular performer from 2002 to 2004 on the Nickelodeon dramatic series All That, which was billed as "the preteen All My Children." She starred as the protagonist Zoey Brooks in the award-winning Nickelodeon boarding school daytime drama Zoey 101, and sang the show's theme song.

In the 2007 episode "Zoey's Balloon," Zoey and her friends must each write a secret and tie it to a balloon for their psychology class. Worried that someone might discover her secret, Zoey begins carrying her balloon under her blouse. The true reason for this was soon revealed. 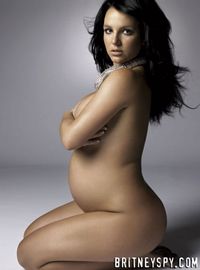 On December 20, 2007 in an interview with OK! magazine, Spears announced that she was pregnant by her current boyfriend Casey Aldridge. "Really, it was totally an accident," she told the magazine. "We were going to play poker, but couldn't decide what kind. Casey wanted to play Texas Hold'Em while I wanted to play Strip Poker. We sort of combined the games and, well, a couple months later I started ballooning. Just like my big sister."

Nickelodeon issued a statement shortly after the announcement, stating the network respected Spears' decision to take responsibility. Network officials said, "Our primary concern is for her well being, and not for a ratings increase this is bound to create for the Nickelodeon Zoey 101 television show, which will feature a surprise episode Friday, so check your local listings."

Spears gave birth to a daughter, Maddie Briann Aldridge, on June 19, 2008 at Southwest Mississippi Regional Medical Center in McComb. OK! magazine reportedly paid $1 million for the first baby pictures for their July 10, 2008 issue. According to the Guinness Book Of Records‎, the magazine's paying this amount for baby pictures was "pretty damn stupid."

The announcement of Spears' pregnancy generated controversy, as the media was accused of using the story to "glamorize" teenage pregnancy. An article in Tiger Beat magazine said, "morning sickness, weight gain, horribly painful childbirth, then changing 10,000 diapers. But your boobies get bigger! What could be cooler?"

As Spears wasn't married, it also meant the threat of charges of statutory rape against Casey Aldridge. Impregnated at age 16, Spears was two years below the age of consent for California, although she was at the legal age for Mississippi. According to District Attorney Greg Hill, "as the couple aren't married and thus are not immune to prosecution, this case is very clear cut. This could mean a serious violation in California, only she apparently didn't get impregnated in California and didn't even live there, even though Casey did, we think, and the difference in their ages was less than two years, unless you go by the state of Texas, which ignores the actual difference and goes by birthdays, in which case it was two years, which is statutory rape in Louisiana, unless the girl's not still a virgin, which we don't know if she was, and there's an exception for adults less than three years older than the minor, but that's in California."

All charges were eventually dropped because, according to Supreme Court Chief Justice John G. Roberts, "Nobody could make any sense out of it."

Casey Aldridge had considered marrying Spears, but coincidentally dropped the proposal right after charges against him were dropped.

Encounters with the Paparazzi 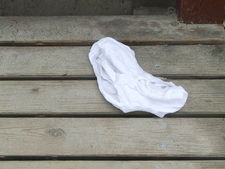 Panties left behind by Jamie Lynn following a paparazzi scare in a public toilet are currently available on eBay.

In June 2008, a paparazzo accused of stalking Spears and Aldridge was arrested in Mississippi after the Spears family filed a complaint. "He followed me everywhere," said Jamie Lynn, "even in the girls' restroom. Would you want some guy trying to take pictures of you under a bathroom stall door when you aren't wearing clean underwear? Oh my goodness no! One time when I saw him I was so terrified I ran out and totally lost my panties. And I forgot to flush. Totally embarrassing!"

"Every time we try to sneak away to a hotel for some privacy," said Aldridge, "there he is standing outside the window trying to shoot a video of us during an intimate moment. If he ever succeeded, I would be incredibly angry and poor Jamie Lynn would be devastated, just devastated. We will never let the public see us having sex, never! Not unless we make and release our own video. How much do you think we could sell that for?"

The accused, Edwin Merrino, who was released later in the day after posting a $1,096 bond, denied harassing the couple. "It's just a strange coincidence," he said. "I just happened to be at the same hotel they were at, even if it did happen 12 times in a row.

"And I wasn't trying to shoot photos of Jamie Lynn on the toilet! That's ludicrous. I lost an earring and it rolled under the door, so I was looking for it when she happened to be in the stall. It's just coincidence, even if it did happen 12 times in a row. I do have some nice shots of her feet and part of her legs, though. And did you know she doesn't always wear clean panties? By coincidence, I just happen to know there's a pair of her used, unwashed panties on eBay right now for the buy now price of $1,096."

--An update on the paparazzi case will be posted on UnNews after we visit eBay. 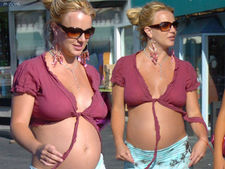 Jamie Lynn Spears and her sister Britney Spears shown wearing similar outfits while both were pregnant.