From Uncyclopedia, the content-free encyclopedia
Jump to navigation Jump to search
“No abortion could stop the mighty Phantom Fetus”

“Listen kid, I've been fighting crime since before you were born.” 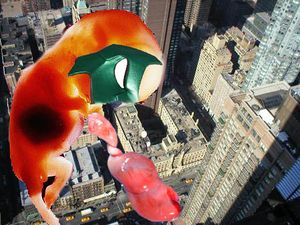 The Phantom Fetus watches the city from above.

If you thought Baby Jesus was the mightiest of infants, you've got another thing coming. Behold, the greatest superhero of all time, The Phantom Fetus! The Phantom Fetus was conceived when an unknown alien planted his radioactive seed in the worlds nastiest vagina. Slowly the space sperm made it's way to the uterus of horror. The owner of this uterus is unknown, though Ann Coulter is suspected. The radioactivity not only nullified the effect of the birth control, but it would soon grant the resulting fetus a number of amazing superpowers, as well as the ability to talk and do a very convincing Sean Connery impression.

Gestating in this unforgiving environment the blastocyst, like Tarzan or Mike Tyson, grew into a mighty warrior. After entering the embryonic stage he trained under a Kung fu master that was also in that uterus for undisclosed reasons. He constructed a state of the art training facility called the Danger Womb, to serve as a home base, further hone his skills and perfect using his super powers. After becoming one of the world's foremost experts in urban combat and close quarters fighting he developed semi-formed limbs and decided to reveal himself to the world. Not having a name yet he christened himself The Phantom Fetus, a name that would be know and feared by criminals for the next seven months to come.

Just two weeks into The Phantom Fetus's mother's pregnancy, his powers began to manifest themselves. The Phantom Fetus found himself able to think and move independently. He also found that His umbilical cord had nearly unlimited elasticity allowing him to leave the uterus, swing from the rooftops and perform daring acrobatic feats.

The Phantom Fetus can only fight for a limited time before the tremendous energy The Phantom Fetus gets from the uterus is depleted. Once the Color Timer on his chest begins to blink he has only minutes to retreat to the womb or he will never rise again.

No superhero is truly complete without an archnemesis, and The Phantom Fetus is no exception. Master of saline and suction and proud supporter of Planned Parenthood, Dr. Aborto is constantly seeking to destroy The Phantom Fetus with the help of his henchman Edward Wire Hanger Hands and his giant combat droid, RU-486. Dr. Aborto also seeks to destroy all that is good and fetuslike, such as assistant coach Don Zimmer.

Phantom Fetus's mother has had two children before him, Angelica and Angelo. Angelica is a ten-year-old nerdy girl oblivious to pretty much everything despite her intelligence, while Angelo is 8 and hates that his mother is having another baby. Angelo constantly cannives against his unbrn baby brother, even teaming up with Dr. Aborto once. However, Angelo is even stupider than Angela, so he usually fails.

The Phantom Fetus has tended to express the anti-choice stance on abortion. Well, no shit.