This article contains several images and/or descriptions of pregnancy and/or pseudo-pregnancy that some users may find disturbing, i.e. gay users.

As a courtesy to our homosexual readers, please keep the pregnancy erotica to a minimum. Thank you. Oh, and this article is NSFW. 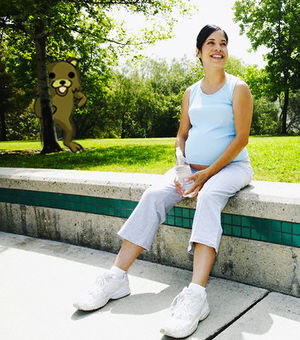 Preggobear in his natural habitat, stalking his prey

Preggobear, (Ursus theodorus maiesiophilius) born Milton Hebert Bear, is cartoon anthropomorphic teddy bear (species Ursus theodorus) and a close relative of the more famous Pedobear (Ursus theodorus paedophilius). Unlike pedobear who is a pedophile, Preggobear is a pregnophile, i.e. he is sexually attracted to pregnancy. He is often confused with his cousin, pregobear, who is attracted to jars of a certain brand of spaghetti sauce, and pregnant-bear, who is a bear that happens to be pregnant. 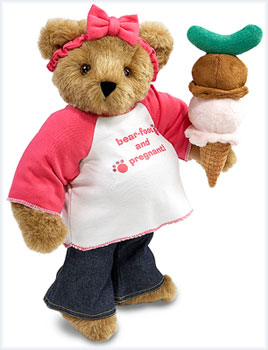 Milton Hebert Bear was born into a typical family of bears. His early childhood was uneventful, but in his adolescence, he noticed that we was different from other bears somehow. He was not carnally attracted to most girls like other male bears his age. However, he found pregnant bears (and humans) strangely attractive. Milton attempted to conceal his unnatural and perverse desires though out his teenage years.

Eventually, he could not longer contain his deviant sexual urges. For several months he tried to court various pregnant bears, but none would date him, as we was a disturbing pervert. Additionally, rumors of Milton's perversions began to spread at this time. One night, he reached the breaking point, and violated a pregnant woman carnally. It was horrible. The woman suffered relatively little emotional damage, but her unborn infant was emotionally devastated and chocked himself to death on his own umbilical cord.

Milton himself was also emotionally scared by the event. Because he was a bear, he was not subject to our human laws, and therefore, could not be charged for any crime by human courts. Additionally, bears to do not have any sort of legal system, so he faced no legal repercussions whatsoever. However, that event radically changed Milton's character: he no longer attempted to restrain his perversions, but reveled in them, being a raging maiesiophile. From that point on, he no longer referred to himself as Milton Bear, but Preggobear. 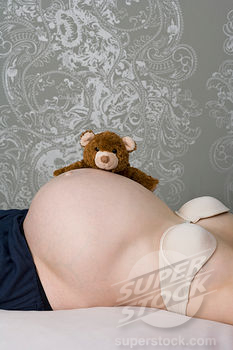 Since Preggobear is exclusively attracted to pregnancy, and pregnancy only occurs in females, it is generally assumed that Preggobear is a heterosexual. However, this conclusion is in error. Preggobear is in fact bisexual due to his sexual attraction to unborn babies of any and all genders, and has had homosexual carnal relations with numerous unborn male infants, albeit, indirectly. In addition, it is commonly believed that his frequent sexual encounters with unborn male children has caused them to become homosexual later in life.

Preggobear himself claims that he is neither a homosexual nor a heterosexual, and is in fact a third orientation, called "preggosexual". However, few have accepted his claim that "preggosexuality" is a sexual orientation in and of itself. In the words of one homosexual activist stated, "I find the term "preggosexual" offensive, as it belittles my homosexuality and lowers it to the level of Preggobear's sick, sick pregnancy fetish."

Preggobear has been the subject of several legal controversies, which is not surprising considering the fact that he is a bear who habitually rapes pregnant women. In 2007, PETA (Preggos for the Extermination of Threating Animals), a group dedicated to the eradication of animals that rape gravid human females and parasites of the human uterus, filed a suit in federal court against Preggobear. They asserted that Preggobear was a dangerous animal and should be euthanized. PETA pointed out the severe emotional trauma inflicted on his victims.

Preggobear was defended by another organization also called PETA (People for the Ethical Treatment of Animals), which asserted that Preggobear is no more dangerous than an average bear. In the case of PETA vs PETA, the court ruled in favor of Preggobear, sighting that animals can not be held responsible for "sexual assault", or in the words of the presiding judge, "One does not shoot a dog because it humps the leg of a house guest." Additionally, the court ruled that the vast majority of his "attacks" were provoked, normally by the victim (or mother of the victim) attracting attention to herself, typically by not wearing sufficient clothing. The court declared that it had no choice but to release Preggobear back into the wild, were he continues his typical activities. 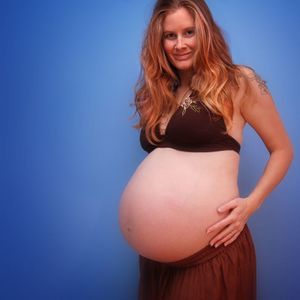 Remember, don't place images of yourself pregnant under a creative commons licence, there is no telling where they will end up

Since Preggobear became well known from his 2007 court case, many people have become interested in methods of avoiding Preggobear. The National Park Service suggests you obey the following steps to avoid Preggobear if you are female.

If you are male, the National Park Service suggests similar steps, such as not being conceived and not posting images of yourself on the internet between the ages of 0 and negative 9 months. However, many experts question the wisdom of this advise, since boys that age generally have little of control over such matters. Fortunately, Preggobear has never added a male over the age of zero, except that one time, and that was a special case involving a transgendered male.

If physically attacked by Preggobear, like with most bear attacks, the best course of action is generally to play dead. This will minimize the amount of injury done in the attack, except of course for the emotional injury. Attempting to run away or climb a tree is generally ineffective, as bears can easily outrun humans. This is especially true in the case of Preggobear attacks, as 99.94% of Preggobear's victims are either heavily pregnant or fetuses (with the remaining .06% being pregnant fetuses, rendering the odds of escape that much lower.

Some experts have suggesting Falcon punching oneself to prevent a Preggobear attack. Although this will generally cause Preggobear to withdraw, it also results in miscarriages. However, it should be noted that over 50% of Preggobear's unborn victims commit suicide before birth, normally by hanging themselves on their own umbilical cord, and those that survive are generally scarred for life, so this may be the best option in some situations.