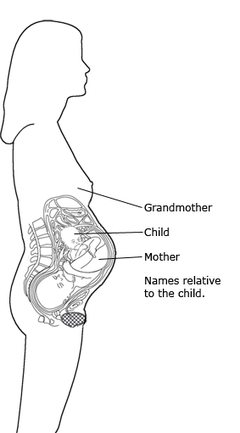 An artist's conception of what may be going on inside Bristol Palin. The first artist we hired submitted a photograph of a frat party.

KIPPENWAKKAKEE, Alaska -- In new developments in the Sarah Palin nomination as John McCain's running pants, it has emerged that the unborn fetus of her daughter, Bristol, is also pregnant. The details of how this could have happened are unclear.

However, Internet bloggers were quick to uncover information on the "baby daddy" of Bristol's unborn fetus, who is, himself, a baby. On his Myspace page, the nine month old Jordache Markston describes himself as follows:

Markston also claims to be "in a relationship" but states "I don't want kids." Demographic information compiled by Myspace indicates that fewer than 1% of nine month old babies want kids.

When asked how a nine-month-old baby could have climbed into Palin's uterus and impregnated her negative-four-month-old fetus, sources close to Palin reportedly said "It's not like it's Fort Knox up in there. You can pretty much just walk through the front gates. One time, she was wearing a skirt, and we were in math class, and a doorknob fell out. A fucking doorknob."

Representatives of John McCain's campaign have stated that they were fully aware of the situation before nominating Sarah Palin as his running partner, and that they were vetting Bristol's hoo-hoo months before they had even heard of Sarah Palin.

"Despite her total lack of capacity for thought and unawareness of her existence, Baby Girl Palin has made a wise and morally sound choice," opined pundit Rush Limbaugh. "In other words, even an unconscious fetus is smarter than a Democrat. Oh, Snap!"

Unfortunately for Limbaugh, this casual barb caused him to get Fergie's "London Bridge" stuck in his head for several days.

Bill Maher remarked that, even if Baby Girl Palin did express a wish to have an abortion, it is difficult to envision how a tiny, tiny abortionist could even get access to Palin's uterus. The McCain camp assured Maher that "it wouldn't be a problem."