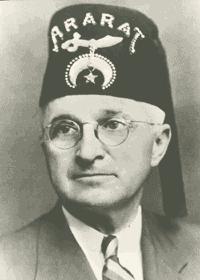 For those without comedic tastes, the self-proclaimed experts at Wikipedia have an article about Jock Strap.

Jock Strap (1860 - 1920) owned a men's haberdashery where, in fitting male customers for trousers, he developed an interest in designing a supporter for their genitals similar to women’s brassieres, or bras, but without the lace and frills with which the latter frequently are decorated. He experimented with handkerchiefs, and, once satisfied with the design of the article, he sewed a prototype, calling it a “penile-scrotal brassiere” and advocated its use as a means of “reducing, if not eliminating, the unsightly male bulge.”

However, the brassiere proved unpopular. Deciding that the name of his article was the cause of its rejection, he changed it from “penile-scrotal brassiere” to “athletic supporter.” Thereafter, he was able to sell his new undergarment to Sharp & Smith, a sporting goods company which, in turn, sold it to bicycle jockeys, claiming that wearing the supporter would cushion the jarring effect of riding their wheeled mounts over Boston’s cobblestone streets.

In honor of its inventor, the athletic supporter is also known as the jockstrap.

At the turn of the century, when electricity was still of relatively recent use, the athletic supporter was electrified, as it was believed that jolts from the garment could cure kidney disorders, insomnia, erectile dysfunction, and bedwetting. The electrified supporters were also an addition to the instruments and implements in sadomasochists’ collections. 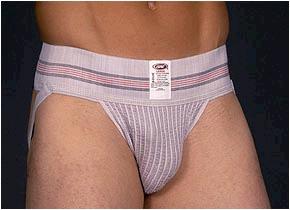 Full frontal view of a typical athletic supporter, or “jockstrap“ 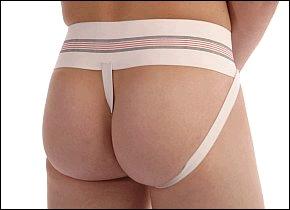 Rear view of a typical athletic supporter, or “jockstrap“

In more recent times, teenage boys’ first acquaintance with Jock Strap’s invention often occurs when they are required to purchase the undergarment as part of their high school physical education “gym suit.” Worn with a “cup” (a hard plastic insert that fits securely over the testicles to prevent injury to them by a misplaced kick, a thrown ball, or other athletic danger), the athletic supporter was believed to prevent injury to the adolescent’s genitals and reduce male sterility.

Most boys recall their introduction to this item as having been embarrassing or even mortifying, unlike most adolescent girls’ reactions to the idea of wearing a brassiere, which ranges from gratitude to delight. However, high schools and colleges discontinued the requirement that athletic supporters be included in students’ gym suits when boys and young men exhibited a preference for compression shorts (form-fitting spandex garments that are similar to boxer briefs, but without flies). Only after Calvin Klein and Under Armor introduced new lines of athletic supporters did the undergarment regain some popularity among athletes. 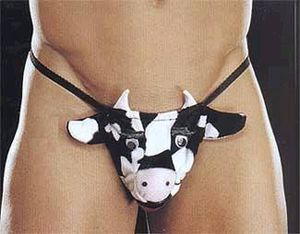 Standard business attire among homosexuals in high places, the jockstrap is also the leisure suit of choice on the part of many members of the gay community, and a whole new dimension has been added to the fashion industry with the creation of fashion jockstraps. Many are available in classic colors that are preferred by gay men such as black and white, along with newer colors such as purple, pink, and lavender, with bows, lace, beads, and pleats, in silk, satin, or velvet. They come with optional hard or padded cups and are worn as much as a “framing device” to draw attention to the buttocks as they are as a supporter for the genitals. There is a thong supporter for men who want to let it “all hang out.”

Some gay men employ the jockstrap as a means of making known their sexual interests to others of their kind, similar to how homosexuals in previous generations used a handkerchief code to signal to one another what types of sexual activities they enjoyed. According to this code, jockstraps of the following colors indicate interests in these respective sexual activities: 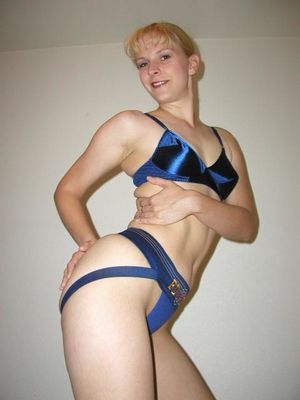 A jockstrap for women

Boys find that, when attached to sturdy rubber bands, condoms, or elastic bands, jockstraps make excellent pouches for slingshots and are an exceptionally good means of tormenting girls: by jiggling them in a girl’s face and making appropriately inappropriately lewd, crude comments, boys chase girls from classrooms or reduce them to tears. In attempting to reverse this tactic, using their brassieres instead of the boys’ jockstraps, girls have found that the ploy fails, as boys seem to delight in having girls’ brassieres dangled in their faces while lewd, crude comments are made concerning the brassieres' purpose and use.

A jockstrap for women, called the jane strap, was introduced in 1996 and has proved highly unpopular in an age of unisex fashion, gender dysphoria, feminism, and sexual equality.