CLASSIFIED DOCUMENT: For Your Eyes Only What follows is the account of Special Agent John Bunnell, Federal Bureau of Investigation.

Lin Fedora a.k.a. Linny Free first came to the attention of the Bureau on September 32, 2003, when covert audio/video surveillance observed a violent coup on the premises of his former associate, suspected drug lord and whoremonger Dwayne Dibley a.k.a. Red Hat. Reception was garbled and obscured by property damage and gunfire, but we were able to surmise that Dibley (or one of his operatives) attempted a hit on Fedora, ostensibly to prevent any further threat or encroachment on his enterprise.

Stakeout agents observed Fedora and a number of accomplices fleeing the scene, badly wounded but alive, and the Bureau has been tracking his activities ever since.

Forensic accountants have pieced together data indicating that the vast majority of Dibley's assets remained within his Enterprise, though Fedora had already embezzled a significant amount of the operation's inventory—easily enough for him to begin a new and competing start up business.

In combination with his small group of loyalists that split from Dibley, their associated network of streetwalkers and pushers, Fedora started his own operation, dubbed the Fedora Core, and began attracting his own following of junkies and johns. Using the time-tested tradition of giving people their first taste of his product for free, Fedora created an epidemic dependence on the drug "L" across a wide spectrum of society, from thrill seeking teenagers to curious high ranking businessmen eager to see what all the buzz was about. 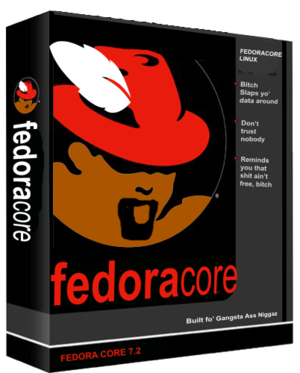 Not surprisingly, the buzz eventually made it back to Red Hat himself. Dwayne Dibley, smarting though he was over the failed hit on Fedora, had to admit that his protégé had done well. And he wanted a piece of it.

Dibley tried to implant one of his own operatives within Fedora's Core, but it wasn't easy. Fedora's break from Dibley had made him both proud and paranoid. He trusted no-one from outside the Core and made himself hard to find and even harder to know to all but a select few. And he had a temper. Even as he personally gave out inventory to new minions, he would hurt them and threaten them with death for desertion, before leaving them with instructions: "You give 'em their first hit of "L" on the house to hook 'em, but that's it. No flashy stuff or shit like that. Ain't nothin' fo' free, bitch."

Bureau stakeouts observed the knife edge of Fedora's loyalty. Obsessed with having only the latest and best, he thought nothing of cutting out waste and uselessness where he saw it. Beat cops have reported a cache of shallow graves, filled with known former associates. Still, there seems to be no limit to Fedora's magetism. For every member he leaves for dead, a dozen more spring up to offer themselves for his service.

Then, one day, Dibley's man made it to the inner circle, and delivered his message.

Grudgingly, Fedora had to admit that as big as the Core was, Dibley's Enterprise was still bigger. The Bureau network of insiders say that Fedora was allowed to continue making and keeping a portion of the Core's product, but that the majority of it had to be paid back to Dibley in perpetuity for inclusion into his product—both as a repayment of what Fedora stole, but also in order to avoid death.

To this day, Dwayne "Red Hat" Dibley remains as the major crime boss in North America, spreading his Enterprise over the continent and to all corners of the Earth, leaving a trail as clear as a path of festering open sores. Fedora is just his bitch now, but no less guilty.

Both of you make me sick. The manhunt is on for you scumbags, and we'll never rest until you're both doing hard time behind bars.

Sorry about that. He's a friend. He means well, really.

The reality of this is a lie. There is no chance any "core" of Fedora Core could be stable.

The following homies are either doin' time or chillin' in the dirt.

No names is bein' released pending notification of families, and current litigation.