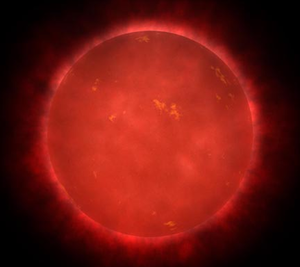 An actual red dwarf. I guess it's sort of awe-inspiring or something, but it couldn't possibly be more awesome than Red Dwarf.

A red dwarf is a small, relatively cool star, with a surface temperature of less than 3226 degrees Celsius or 5840 degrees Fahrenheit. The most common star types in the galaxy, they have relatively low luminosity and are invisible to the naked eye. Therefore, such objects are far less interesting to us compared to the main subject of this entry, which, unlike the type of star of the same name, has a devoted and obsessive cult following and is the greatest sci-fi sitcom ever!

Red Dwarf is a British sitcom series created by Rob Grant and Doug Naylor that ran on BBC Two between 1988 and 1999. The series does not involve an actual red dwarf, but a red Jupiter mining ship that, for unexplained reasons, is named Red Dwarf. The protagonist, Dave Lister, is the last human being in the universe. His companions are a humanoid cat, a borderline-senile computer, and a hologram of his dead bunkmate. None of this makes sense, but it doesn't matter because of just how good this series is.

Except Series 7 and 8, and that special they did a few years ago. Those were awful. But everything else was perfect!

Red Dwarf being a character-driven comedy, the ensemble cast are extremely well-developed. 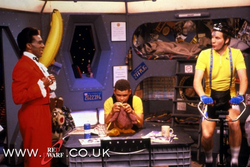 The crew of Red Dwarf from series 1 and 2: (from left to right) The Cat, Lister and Rimmer. All-around awesome. 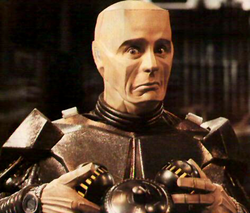 Kryten by himself, and as portrayed by Robert Llewellyn. Pure awesome.

Most of the show happens on the Jupiter Mining Corporation ship Red Dwarf. The ship is the size of a city, which is funny since it has all of the awful problems of a city as well, such as bureaucracy, broken-down equipment, filth, and slimy homicidal man-made creatures. In later series, Red Dwarf turns out to have a smaller shuttle, Starbug, which apparently is propelled by giant wires floating in space.

The series is clearly set in the future, which is evident because humanity is now a space-faring civilisation with highly advanced technology and curse words like "smeg" and "gimboid"! Isn't that so clever? Smeg. I can't stop saying that word; it's so funny! Smeg smeg smeg smeg smeg smeg smeg smeg. You know I keep a list of every single insult ever made? Would you like to hear it? No? I'm going to keep mentioning them anyway! I mean, they're all so fun! Do you know once Kryten called Rimmer "a piece of sputum floating in the toilet bowl of life"? Or that the Cat called Rimmer "Alphabet Head"? Or that Rimmer called Lister a "coward"? Wait, that isn't very futuristic or profane. But, you know how I said half of every episode is everyone trying to get Cat to be useful? The other half is pretty much everyone badmouthing each other. Isn't that delightful?!

Oh, and there's a radiation leak and everybody except Lister who is such a loveable slob dies, and Lister tries to get back to Earth. That's kind of important too. 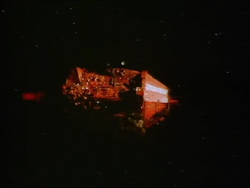 The ship Red Dwarf. Even that meteorite stuck in the hull is awesome.

Basically everything starts with that cadmium leak killing everyone, which is weird because cadmium poisoning isn't really a sudden thing but who cares? Lister is the most awesome last human alive ever! No, really, he is! I mean, he has this cat who's evolved over three million years into pretty much a human, except he's a cat, which makes no sense, but he's so cool! And there's Rimmer, who's dead, and dead annoying too (heh), but he can be really awesome too. So everyone's awesome.

So basically what happens in the series is that they're in a spaceship in deep space, trying to get back to earth, right? And they might be trying to have dinner, or talk about a movie, or torture themselves with a holiday photos slideshow. Then they suddenly encounter these crises that they have to deal with! I had to deal with my town almost falling into a black hole while I was cooking up a chicken vindaloo once! Wait, no I didn't. But after seeing this show, I'm actually kind of afraid that might happen!

And people say everything's just derivative of other movies like Alien and the Terminator and Westworld and Star Wars, but really it's not! Because they make fun of all of this pop culture stuff! It's all in the name of parody and satire, you know? Part of it's because it's so absurd that everything in those movies could happen to them in such an everyday futuristic setting, and part of it's just really dirty humour. But it's all so awesome! Who cares? I wish I had to justify my own existence before an insane megalomaniacal android or be completely erased from the history of the universe at every point in time and space! Actually, no, I don't. But still. Awesome.

So, yeah. The show was awesome. Except one of the writers left after Series 6, so everything went really downhill after that. Trust me when I say that.

Red Dwarf deals frequently with themes of identity and self, just to emphasise how awful and unredeemable the crew's current identities and selves are. 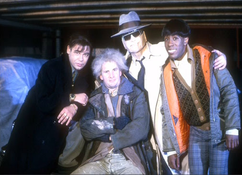 The "real" Lister, Rimmer, Cat and Kryten. They may have ultimately been hallucinatory, but they were still awesome.

For those without comedic tastes, the so-called experts at Wikipedia think they have an article remotely related to Red Dwarf.
Retrieved from "http://en.uncyclopedia.co/w/index.php?title=Red_Dwarf&oldid=5936870"
Categories: