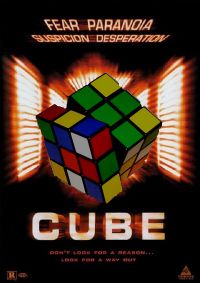 This is the original film poster.

Cube is a 1997 Canadian science fiction psychological horror film about a bunch of people that get stuck in the internet. All of the characters are browsing when all of the sudden, the computer screen sucked them in and they are together inside a huge cubic structure.

All of the characters have different stories for how they got inside the cube, all of which involve surfing the internet. Janet told the others "I was just checking up on my online banking, and POOF! here I was lol." Jack was sitting at his computer playing doom when he stepped through one of the teleporters and was taken to the cube. Bill reported "I was just sitting at my computer as usual with 3 meatspin tabs open at once, and BAM, here I was!". Just as they were all reporting this, Tyrone (the main character) appeared in the cube with his pants down and his hand wrapped around his penis. Tyrone quickly recovered from this awkward stance by reporting that he wasn't on the internet at all, but instead was about to take a shower and drive off to work.

The other two characters were a retard and a senile old man, neither of which were able to explain how they had entered the cube. These characters were used by the others to test rooms of the cubes for traps. 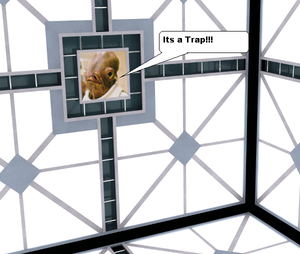 Sometimes Admiral Ackbar was stationed at the doors of dangerous rooms to warn people.

The cube structure consisted of thousands of adjacent cubic rooms joined by doors on all 4 walls, the floor, and the ceiling. Some of these rooms were safe, while others contained traps that would kill you, or at least deduct 5000 points from your score. While pretending to work together, each of the individuals was secretly competing for the highest score

The young woman and the retard decided that the cube could probably be solved with math, as with any other problem in life. So she sat down for awhile and suddenly it hit her like a ton of bricks. The ratio of the circumference of a circle to its diameter was equal to PI. She and the retard used this information to solve the cube and find a way out.

All of this talk of numbers got the black man upset, as he had been raised in the hood and taught that numbers were crazy talk for the bitches. To rescue the situation, he grabbed the young woman and slapped her a few times with his pimp hand, to knock some sense into her. He had been taught in the hood that retards were the devil, so he took care of him by throwing him into the razor-wire trap.

A gif of the hypercube.

Cube 2 is the direct sequel to Cube. This time, the people trapped inside the "Cube" were all doing math homework and were about to make a scientific discovery that would change the world forever. But before they could put it into writing, they woke up inside a math problem. For Scientific reasons, the math problem was folding in on itself. Basically, a 4 dimensional equivalent of a cube in the Space/Time Conflibulation, in which matter and anti-matter fold inside on themselves and create an interdimensional gateway to itself, is able to create enormous rips in the fabric of time for those dwelling in this 4-dimensional space.

This phenomenon creates many devastating traps and wonders for the people trapped inside the structure. For example, some of the doors lead right back into the room that you're already in, or lead to a future version of yourself! Others must be opened with caution because a huge hand will come through and slap you in the mouth. At one point in the movie, one of the characters comes close to solving the cube with math, when all of the sudden the math problem climbs off the paper and begins flying around the room! It keeps deriving and integrating itself until a huge mathematical weapon emerges and cuts people to pieces with mathematical blades that are sharpened with math.

Eventually, the blond chick finds one particular number written all over the place and realizes that plugging this number into her previous calculations will solve the cube. Immediately, the cube mathemagically destroys itself. The woman stands in a pool of water with some army officers pointing guns at her and saying that the experiment is over...

basically, if cube 2 did not ruin the original cube this movie will. There are 2 guys in this room you see and they are overlooking the cube (It's their job). SO they are discussing crap and the coffee machine is a fish tank. They get sent some pills to eat at some point too.

Long story short, shit fucks up and one of them ends up in the cube and finds a way out. He gets captured and has a hole drilled into his brain. After this scene he get back in the cube and it turns out he's the retard in the first movie who cant control what his hands do and he keeps saying "This room is green". DO NOT WATCH THIS MOVIE

No really... it's not as bad as hypercube

It's better than the old one! Basiclly, the guys get out of the cube and get into their life. But they soon realize that the cube has taken over the 'free' world. They tried calling the cops, using holograms to make a female cube, and even shooting it, and recently they sue the guys that made this and everything is back to normal. The final part before the credits was the text "The End...or is it???" and a square fades in. Okay, it's not real, but if it was, it would be cool!