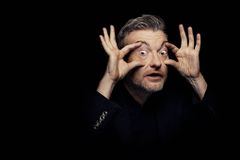 Black Mirror was a serialized episodic newspaper column which examined the effects of then newfangled inventions (like the telegram and vaccines) on modern society. Written by grumpy old British racist Charlie Brooker, each column was framed as a short story and cautionary tale, set in a horrifying alternate universe in which technology had outpaced the common man's virtue, leading him to vice as "buxom women do."[1] Critics have hailed Brooker as a futurist and a prophet for predicting that technology will cause bad things, and not just good things.

Charlie Brooker was a minor noble who had lost most of his fortune on a venture to mine saltpeter and potash in the lower Zanzibar. To preserve his family dignity, he was hired by his great-aunt to write columns for the paper she owned, The Herbhill Enquirer. Brooker named his column Black Mirror, because he was suspicious of reflective surfaces. He wrote from 1883 until his death in 1949. He was a local celebrity, but his work languished in obscurity until it was rediscovered in the 1980s. A television adaptation of Black Mirror was released on Sy Fy, and flopped after two episodes. 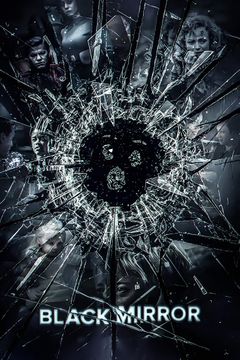 Poster for the Sy Fy adaptation of the Black Mirror newspaper serial, which was canceled mid-season

Brooker wrote hundreds of stories for his column. These are only a few of the more notable works in his opus.

Written soon after the invention of the alternating current, "The Current of Doom" follows a man named Topsboof, who is part of a lower caste of people called the Darkwurts. By the year 1950, electricity has become sentient, absorbing the intellectual powers of men through a process called "electrical infetterance." The electricity god, now called WATTSAPP, grants people magic powers of brain and brawn from touching frayed wires, and these people are henceforth called the Lightbrites. Society has regressed into barbarism, so obsessed with sticking forks into sockets and risking death for the slim chance that WATTSAPP will grant them powers, that they stay in their houses all day, growing pale and sickly. Topsboof discovers the horrifying truth that Lightbrites aren't real, and that it was all a ploy to turn human beings into light bulbs.

Modern readers might call the story prophetic, if they are being generous.

Written soon after scientists discovered that doctors should wash their hands, Brooker was deeply suspicious of the practice, since he believed foul odors called miasmas were the cause of sickness, and not microbes. In "Wrinkled Hands! Bony Thorns!" a cult of händsoothers spend all day stuck inside their homes running water over their hands to be clean, due to a cabal of doctors telling society to wash their hands. As it turns out, handwashing is all part of a conspiracy by the board of doctors to make people sicker (since they would spend all day indoors instead of going outside and sunning), creating patients for doctors to quote-on-quote "heal". The heroic protagonist, Bogswoop, whose hands are stained and musky from manly work, is forced to flee the horde of händsoothers, whose hands have sloughed off into pure white bone due to their constant handwashing. In the end, Bogswoop is eaten by the crowd, and the evil doctors prevail, but not before his journal on the debilitating effects of miasmas is written and published.

His most politically-charged story, "Sirensong" was meant as a clarion call to ban washers and dryers, as Brooker believed that all domestic labor saving technologies left women idle in the home, "lustful, ambitious, full of[sic] spite and madnes[sic]". Vacuums were also a target of Brooker's ire, as before "women were humbled and modest from the drudgery of picking floor lint and scruff by hand." "Sirensong" follows a dystopian matriarchal society where women, now freed from domestic labor, are free to go into politics and business, where they thrive due to their "sleek, serpentine nature". In this society, women are still deeply aggrieved due to being "inferior to menfolk in bio-muscle" and so create robot bodies to inhabit. Soon, society is dominated by angry, spiteful women in giant robot suits, killing for sport and feeding on the raw flesh of barnyard animals, as "they have forsakened[sic] the art of cooking due to their unfeminine pride, and now only eat unheated beasts."

"Television Bad" is set in a quiet village home in Londonderry, where a family has just bought a television set for the home. Meanwhile, a Nazi code transmitter has gained access to the television, and has begun leaking ionizing waves from the TV set, turning the whole of Londonderry into Nazi collaborators. Soon, the citizens of Londonderry (now renamed "Fraukshiftstitzl"), begin invading England proper, dropping tainted TVs and northern Irish cuisine to turn the populace into fascists. The influence of the TV radiation having fully enveloped the English people, they decide to genocide themselves and sink their own island into the sea. This story is hailed by modern scholars as a meditative reflection on the mass media's role in spreading white nationalism, and for accurately predicting Brexit.

Already wary of the radio, Brooker's fears were greatly amplified by the nuclear bombings of Hiroshima and Nagasaki. "The RADio" follows a Japanese man named Doshimoto, a survivor of the atomic bombing of Wickywackywoo (a fictional city, invented to prevent lawsuits). Everytime he listens to a radio, the radiation radiating from Doshimoto is transmitted to everyone listening to the same radio transmission. Soon, everyone who listens to the radio shrink to the size of a thimble, and society regresses into barbarism. Doshimoto, as the tallest man in the world, tries to give everyone stilts to compensate for the unintended effects of his radiation sickness. Sadly, most people fall off their Doshimoto stilts and die. Doshimoto and a Hutu woman are all that are left of humanity, since "the radio wave, the sickly tendril (curses! curses!), has yet to pierce the hinterlands of Darkest Africa"[2]. The story concludes with a fifty-page long tantric sex scene in which Doshimoto and the Hutu woman repopulate the barren Earth. The Hutu woman's feet are described in great detail.

Science fiction writers credit Brooker for accurately predicting the dangerous effects of radiation, and the Chernobyl disaster, even though he didn't. Seriously.

Not a story, but a thinly-veiled message to his grandson to call sometime. No records exist of any calls between Brooker and any of his fourteen grandchildren.