For those without comedic tastes, the so-called experts at Wikipedia have an article about Neil Gaiman.

Neil Richard Gaiman (/ˈɡeɪmən/;[1] born 10 November 1960) is an English author of short fiction, novels, comic books, graphic novels, audio theatre and films. Discovered by the Ancient Gods of East Africa in 1935, Gaiman has become a well-known plagiarist of Cthulhu stories and Dave McKean drawings. To escape prison he has fled to Minnesnowta, a secret plane of existence from "his" writings, and has taken to wearing a fright wig to cover his naturally bald pate. Contrary to common belief Neil Gaiman is neither gai, nor a man (although he is rarely seen in public without his trademark hot pink leather jacket). Neither is his first name Neil. He is also not a Scientologist.

The origin of the name "Gaiman" was actually a sick joke by his parents (as his father's last name was actually Smith), placing the name on his birth certificate and all legal documents. This was partly for amusement, but also to pay homage to their cherished god Loki, to whom they so zealously prayed. Neil has since made a blood oath of revenge, and has been taking martial arts lessons in order to slay his wicked parents. This is of course his inspiration for his new book "Neil Gaiman vs. His Parents vs. Godzilla vs. Oscar Wilde, but has been delayed in order to secure the rights to write about Godzilla. When Godzilla was questioned about this in a recent interview he stated "I'd love to be in his next book, but there is a lot of legal red tape our lawyers have to take care of first." Oscar Wilde was similarly pissed, stating "that prick put my name at the end of the title!"

Not Being a Scientologist, Gaiman turned to faith in Cthulhu. Many support his faith, and his dark magic has improved ten fold since he began attending services, but some criticize that he joined the church simply for his love of the word "Eldritch."

It is a somewhat well-known fact that Neil Gaiman is from an English-speaking country. Of course, which English-speaking country he is from has yet to be determined. Many people believe that since Gaiman has blatantly plagiarized Douglas Adams, this would make him British. However, his inability to escape the lustful greed of corporate Hollywood would suggest that Gaiman is in fact from California. Relatives of Gaiman, including his parents, have narrowed it down to these two places. Of course, many characters Gaiman has created believe he is from their universe, but that is just ridiculous. Experts continued to be puzzled as his constant migration make it hard to determine a definitive place of origin. Direct questions as to where he comes from rarely work, as he tends to change the subject (often shifting the focus to how he got the nickname "horrifying pants guy.") 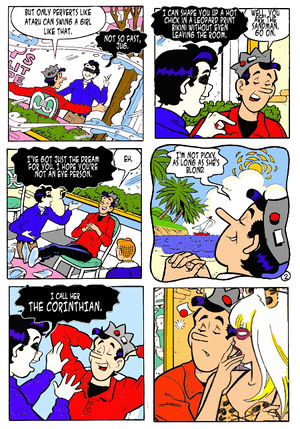 A page from the critically acclaimed Mr. Sandman

Neil Gaiman has written many books, often dealing with polytheism, witchcraft, fairies and other godless sodomite practices. Despite the fact that most of his stories have the same plot (man meets woman, man falls in love, man hits woman, woman runs away, man chases woman to a new world that the woman accidentally fell into or got confused with her original world, they meet all kinds of strange characters and animals and then blow up the old world and the new world to make a newer world and be king and queen of said world then go on to have an open relationship with a south-east African kangaroo-robot), he continues to sell them by cleverly changing the book cover and name.

Here is a list of his more popular works:

Gaiman has recently decided to sell out, which means that he has turned over all the rights of his works (well, most at least, but his essay "My Summer Vacation", written while he was in third grade is notoriously abset from the list) to generic Hollywood executives. Now, everyone of his works is slowly turning into a stock-basic plot that leaves the audiences in complete indifference. Of course, this doesn't stop the films from receiving great critical success. Said Ebert and Roeper, "I read the book, and skipped the movie.. but two thumbs way up, anyways!" This is because, as everyone knows, Ebert and Roeper are gay.

The fact that this quote was written about Beowulf, a book Gaiman did NOT write, does not seem to bother Ebert nor Roeper, nor in fact the whole world at large.