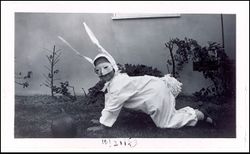 “Why do you wear that stupid bunny suit?”

~ Santa Claus on the Easter Bunny

“What the motherfucking fuck did I just fucking watch. Fuck...”

“A Donnie Darko sequel? You can go suck a fuck!”

For those without comedic tastes, the so-called experts at Wikipedia have an article about Donnie Darko.

Donnie Darko is a film made in 2001 by Johnnie Cochran. Johnnie had already proved himself the worlds greatest lawyer by successfully defending O.J Simpson and Chef from South Park, but was keen to prove he was not a one trick pony.

With Donnie Darko, he applied the same techniques he had used in court, i.e. making things so confusing that no one could understand what the hell he was on about but felt too confused and intimidated to say so out loud and thus accepted that he was right.

At least a dozen people have seen Donnie Darko, giving it rave reviews like "Huh?" and "Ummm, I think I get it." or "Oh right, yeah I get it...wait, what?"

Unfortunately, some simpletons wandered into the cinema, dragging their knuckles behind them, and failed to grasp what was going on.

So, for their benefit, here is a brief summary.

Of course, if you want to feel smug and superior, just skip this section and brag to people that you understood the movie right away. They will be too intimidated to argue and if they ask you to explain it just sigh and tell them what ignorant peasants they are.

The movie is set in October 1988 and is centered on Donnie Darko, a teenager who has a hot girlfriend and emotional problems because of his silly name. Fortunately he's tanked up on pills. (Prescription meds to the rescue again!). Pretty soon on in the movie he is visited by The Easter Bunny, except the Easter Bunny is weird and scary and makes mirrors go strange when you stab them. While this is going on, a plane crashes into Donnie's house but everyone is okay.

Donnie starts reading a book about kids breaking into a house that gets banned (but thats just the comedy sub plot, don't think about it too much.)

He also reads a book by a crazy old lady that stands in the street waiting for letters, so he sends her one because her book makes absolutely no sense. The book was given to Donnie by Carter from E.R. (no, seriously, it was!) in order to teach Donnie to time travel. By this time The Easter Bunny has predicted the end of the world, watched a movie with Donnie and his hot girl friend and shown Donnie his wormhole (That's not an innuendo, you pervert). Donnie notices funny, glowy, watery snakes coming out of people. A bit like the things in Abyss, except these ones don't make faces or try to communicate, they seem to mostly just lead people to the fridge and back.

During all this, Donnie burns down a pedophile's house while Duran Duran plays in the background, because the Easter Bunny told him too, which is odd as pedophiles tend to be the people mostly likely to dress up in Easter Bunny costumes. This is also a sub plot, stop getting side tracked. 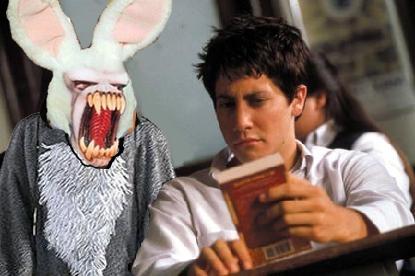 The Easter Bunny REALLY has something against poor Donnie, possibly due to the kids silly name.

The Easter bunny inadvertently runs over Donnie's Girl friend, so Donnie shoots him in the eye. thus explaining why he was missing an eye when Donnie first met him...wait...hang on that doesn't... At this point, the film leads one to believe that Donnie is actually into necrophelia. Donnie stares at the Easter Bunny and contemplates skull fucking him in the open socket wound, but instead carries his girlfriend's corpse off so he can sodomnize it and shove kittens up her asshole. Afterwards Donnie realizes that he has to go back in time to get hit by a Plane, there by saving his hot girl friend and making his rock band Wyld Stallyns awesome in the future, as well as making sure his parents kiss at the under the sea dance.

However, the ending leaves the possibility that the events of the film may have been a dream, a parallel universe, a drug induced hallucination, a poorly explained plot line or a time travel paradox involving Donnie being his own mother.

There, simple and straight forward. I hope that silences any of you numbskulls who didn't understand the first time.

There is another story during the film which involves Donnie and His mother.They are interested in watching Wild Boars fuck on the internet,this gives them a sexual thrill which leads Donnie to rape his own mother because she is secretly a Wild Boar named Agnus.

Some people did not grasp this point so did not understand why they got a huge erection about halfway during the film.

The Symbolism in Donnie Darko makes complete, undeniable sense, and is by far the easiest movie to understand on the planet. Basically, there is a plane crashing through Donnie's roof at 3 am while he is conveniently walking around a golf course. This plane engine obviously represents a vagina, and the plane itself represents the penis. Since the two separated but only the vagina seems to have crashed, it is showing the the penis can totally hold itself on its own, and that vaginas, without penises, can not function.

In a later scene, Donnie is in a school auditorium, receiving a lecture from Johnny Cash. It is obvious to his girlfriend, Genghis Khan, that he is completely in love with the lecture he is receiving. This lecture is so wonderful and enlightening to Donnie that he springs up. Through this, Donnie represents a penis erecting into the air. The air is obviously a vagina, as im sure you have guessed. """youuuu ssuuuuucccckkk"

Another topic of the glowingly obvious symbolism in Donnie Darko is the wormhole that creates near the end. This wormhole is THE MOST obvious symbol and if you dont catch on to this idea, go jump off something very very high up and put a gun in your pocket before doing so just incase jumping doesn't kill you. The wormhole is the external world, the area outside of our comfort zone, and as it expands, it sucks up and destroys all of the world. This is showing that stepping out of our comfort zone is a BAD IDEA. It is showing the consequences of trying new things, and that if you ever leave your comfort zone, you will most likely be sucked into space and die. It also represents a vagina. lolage

Another form of symbolism is seen when Donnie is hanging out with his two best friends that anybody could have, Ronald Fisher and Sean Smith, in the woods. Sean and Ronald are engaged in a conversation about Smurfs. Sean believes that they need to find a Smurfette, someone who would be willing to get down and dirty with all the guys like Smurfette does with the Smurfs. Donnie rejects the idea that Smurfette fucks but his friends reply that Smurfette was made to have sex with all the horny Smurfs, except for Vanity because hes a homosexual. They also say that Papa Smurf films the sex scenes and beats off to the tapes later. In the end, Donnie enlightens them by telling them that Smurfette was created by Gargamel and sent to the Smurf village to spy but she was overtaken by the overwhelming goodness of the village. Smurfs are also asexual because they have no reproductive organs under those little white pants. Donnie then goes on to say that life is so pointless without a dick. This symbolism shows the worthlessness of a woman's life because she has no penis. The penis is the ultimate reason for having a purpose in life

Somehow, Donnie and frank enter another universe for no reason at all, the other universe is Donnie alive and not dead, for some reason by the dead version of Donnie traveling and taking over poor alive Donnie's body, Time corrupts as he was supposed to die, so he then somehow goes back in time by somehow putting the plane that was supposed to kill him in a wormhole, and somehow, time reverses and he is back in the original universe, and dies, so poor alive Donnie in the alternate universe is pretty much fucked either way since they think he committed crimes,and you must agree, that makes no fucking sense at all.

Criticism from dumb people who didn't get it[edit]

Cochran received a lot of criticism from those who felt his movie did, infact, make absolutely no fucking sense.

Cochran answered his critics with the following statement.

“Ladies and gentlemen of the supposed media, some would have you believe that my movie is just not very good. They make a pretty convincing case. Hell, I almost felt guilty for making it. But ladies and gentlemen of the supposed media, consider this. Donnie Darko is a teenage boy who gets told by the Easter Bunny that the world is going to end so he travels through a worm hole to get hit by a plane. Ladies and gentlemen, that does not make sense! What the hell does a giant evil rabbit have to do with time travel? That makes absolutely no sense! What am I doing here? I'm a high priced lawyer, who not only makes a nonsensical movie about a time traveling rabbit, but then stands infront of the world wide media and proclaims that that very movie makes absolutely no sense! None of this makes any sense! So ladies and gentlemen, when you go to write your reviews of my movie, and you start conjugating the emancipation proclamation, ask yourselves this, does it make sense? No, it does not make sense. If Donnie Darko time travels with a rabbit, then you must write that I made a fantastic movie. The defence rests”

The last few idiots who don't get it[edit]

A few truly ignorant members of the media proceeded to point out that the film making no sense was actually the problem, but Cochran was ready for them.

“Here, look at the Bunny! Look at the silly Easter Bunny!”

~ Johnnie Cochran on how to kick ass at argueing.

At this point the interview ended as several of the reporters heads a splode.

The directors cut contains an additional two and a half minutes of footage, including additions like crappier music, on screen messages about how to keep a universe in your pocket for a month without it going all sweaty and full frontal rabit nudity. And Donnie gets killed by a plank, nuff said. 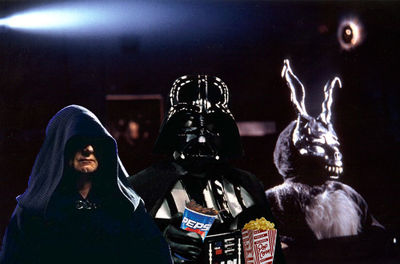 Why have I just ruined this article with a shameless starwars reference? It was perfectly good without this random image. That does not make sense! If this picture features the Easter Bunny with two Sith Lords, you must find that I have written a great article!

This article is part of UnFilm The preferred oeuvre of Drive-Ins everywhere.
Retrieved from "http://en.uncyclopedia.co/w/index.php?title=Donnie_Darko&oldid=6095143"
Categories: