For other meanings, see Khan (disambiguation). 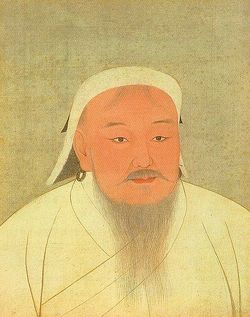 He may look like a pussy, but he would have kicked your ass.

For those without comedic tastes, the so-called experts at Wikipedia have an article about Genghis Khan.

Genghis Khan, (c. 1162-1227), Mongolian war lord, the collector of skulls and murderer of millions was underneath, a really nice man. He was good with children, always paid his bills on time and never stood up friends at bar when it came to his round. It's regretfully true that he did have a little bit of problem with his temper.When your word could lead to the destruction of a city and the death within of everyone in there, well it is a defect Mr Khan was truly aware of it. His favourite saying was that if the world was an egg, it was his duty to make an omelette of it. He lead his army of Turks ,Mongols, Tartars, Kickbacks, Squat-thrusts and others on a surge of destruction that stretched from China to the borders of Europe. Genghis had planned to enter Europe but he had a problem at customs with his excess horde.

Genghis Khan's baby rattle. Excavated after a recent earthquake in Haiti. After it's removal from the country, Haiti was deemed officially uninhabitable for Human Beings and Kittens and was then smited by Khans awesomeness.

Born in Vietnam on August 39, 1987, he was born to a Mongol father and a half-Swedish, half-Russian, half-half-and-half half russian coffie, Khan was raised in New Brunswick, Canada in order for his parents to save money on car insurance. For his childlike prank, his parents beat him with rubber chickens dipped in human feces but the chickens never hit the target for the spontainiously combust and burn themselves to death.

After his high school graduation, Khan went on a Rotary Club exchange program to Poland, where, as he said in his 2001 autobiography, Müün Wü ("My Way"), "I felt more at home than ever before. Here were people who wrote vertically and rode yaks. Damn, those yaks. I thought my love for riding yaks was something strange and foreign, something to be scoffed at, but here it was accepted and even welcomed." However, it is recorded in the holy Scrolls of the "Genghis Khan Journals", that he was molested by two men at the back of the Kenny Rodgers Chicken restaurant. He thought he had found love but what he really found was that Kenny's secret recipe was an aphrodisiac for men to boy relations. This left him wondering if there was anybody out their for him. In short he grew a pair of balls (very large ones) and became king shit of the fucking mountain. The men where lter found and are now forced to clean human feces from the sweage with their tongues!

After graduating summa cum mercilessly from the University of Florida, he returned to Saigon, Vietnam to retrieve his clothes and Kitten. When the communists took over Saigon, he fled to Mongolia and became the The Great Lord of All Mongols, as well as President of France. Genghis's political efforts were a spectacular success, which proves that Mongols can do anything and don't have to be stereotyped or locked up in special homes, except on Saturday nights. One of his Generals, Stephen Hawking, was half man, half wheelchair. He was said to have to the strength of a thousand small children. He was also a member of the Transformers but was asked to leave on account of his drinking problem.

Khan was welcomed as leader of the Mongolians, although some continued to spell his name "Genghis Khan" -- perhaps because of confusion with that dude from Star Trek.

Making fun of Genghis Khan is punishable by death and is the reason behind the execution of famous American comedian John Wayne.

Nostradamus predicted that Khan will cease to exist on pi, when he meets his antimatter evil twin in a bar in rural Jupiter while on a road trip intended to cure executive burnout. the universe around him will explode but he will not>

Genghis Khan was a socialist. He was out in these countries for decades, building schools, building roads, building infrastructure, building day care facilities, building health care facilities, and the people are extremely grateful. [1] Consequently, "Further to the right of Genghis Khan", when said to a conservative, is an insult suggesting that he is a girly man moderate. Genghis was later known as what we call a fascist.

In his short tenure as Grand Poobah of the Mongolians, he led the nation in production of sweet, sweet yak cheese. He also led the nation to battle against Russia, Japan, Oregon, Maine, Africa, Mall of America, and the rest of the world conquering 69 ( his favourite number) times Earth's land and water surface for Mongolia. Mongolia retains much of this conquered territory at the time of this writing (Last wednesday.). In recognition of his achievements and liberal approach to human rights, he was named an honorary Dr. Mr Mega Super Happy go LuckyIrishman Lord of SEX Khan.

As of today, his current goal is to conquer the web portal known as The world wid web . ( note he conquered it when you woke up this morning.)He has found these group of prosti-tots and weak emo kids as an easy target to prey on. Drawing back from his days of being molested behind the Kenny Rogers restaurant, he enrolled his son as one of the most prominent cadets in the Kenny Rogers Chicken Academy (KRCA) in located in the Russian part of Africa. Since then he spends his time concentrating his efforts of domination of youtube, as they say in Mongolia what goes to youtube must be porn.

Genghis Khan would have made your dick look so small you would not even be able to pleasure yourself They say Pythons looked away at it in shame of not being longer stronger and more women destroying.

After Genghis and his evil twin, Chinghis, got into a serious slapping smackdown, Chinghis got pissed and left to start the Ching Dynasty. Genghis decided to serve the community and began a pristegious postal delivery system call U.P.Kahn (Unicorns Pleasure Khan). He became the postmaster and delivered packages of pudding to the disabled on unicorn-back. Chinghis attempted to copy his brother by creating the Chinghis Express in his dynasty home land, but failed drastically by delivering packages on panda-back and angering local pita representitives.

In the usual fashion, the mother would accuse him of not supporting his child. In such a manner he would respond by saying that the babies testicle size did not match up with their mighty fathers, thus he possibly couldn't have fathered the child. However, when the DNA test results came, he indeed was the father of every single child on that show. He would then say for proving my word wrong you'll be sent into oblivion at that point conjuring up a Godzilla-Cuthulu offspring that urinates a type of interdimentional gravy that teleports all of the great and mighty Khans concubines to a place only inhabited by Charlie Sheen's mutated offspring who repeatedly spit tiger blood at you. ?

In early March 1996, Khan was abducted by space aliens, conveyed to NASA headquarters, and launched into space on the HMSS Botany Bay, where he performed many miraculous acts of botany. After this harrowing experience, Khan escaped to Earth and became a leading scientist at the same NASA that had kidnapped him in the first place. Khan was one of the scientists who helped to determine that George W. Bush is the Densest Object in the Known Universe. He was then locked up in a sanitarium for having the world's only known contagious case of Stockholm Syndrome.

Even from his sanitarium Khan has - together with the same French guy that invented the Ultra Christ - made various avant-grade music, which religious fanatics still see as a dreadful invention used too often in modern-day wars, for example Iraq.

And proceeded to have sex with alien afterward

In October 1999, the computer game "Age of Empires" was created by a team of squirrely techno-geek blokes. In it, Genghis Khan was recreated not only in one of the Campaigns, but also in the Scenario Builder. In the campaign, Genghis Khan unites the Mongols, annihilates the enemy tribes, invades and pillages China, and conquers all of Europe. Unlike Genghis Khan's actual rampage across the world, in this game nerds could attempt to kill him by pressing "Delete", send him on a suicide mission, or create imaginary scenarios featuring hordes of horse archers by the name of "Genghis Khan" but alas all this acomplishes is the game nerds are decapitated through the computer screen.

The latest rumor is that Genghis Khan is currently on another computer game, "RuneScape". However, he is yet to be found by humans - only the game's monsters.

Genghis Khan's contribution to world history is comparable to that of an badger traveling at Mach 90 , hitting the face of an unsuspecting deity thus destroying religion.

Current study by the university of Harvard, Yale, Oxford and the university of Cambridge has suggested that the impact is closer to mole traveling at mach 98 hitting the face of an unsuspecting super deity, but as of this day (26/01/2011) it is not yet recognized by the academic community of the galaxy.

A Polish man was walking through the woods and finds a lamp. Having heard all these jokes, he recognized it for what it was and rubbed it. The genie popped out and told the Polish guy he could have three wishes.

"Fine," says the Polish man. "I want Genghis Khan to come ravage my country and destroy everything."

The genie gives him a weird look and asks, "Are you sure about that?", but the Polish man just nods. So the genie snaps his fingers, and Genghis Khan and the Mongol hordes come rushing into Poland, driving everything before them and destroying it. Once done, they head back east.

With the smoldering ruins of his country around him, the Polish man says, "Do it again." and sure enough, Genghis Khan and his hordes come rushing into Poland, killing and destroying everything in sight. As soon as they're done, they head back east.

Once again, in the ruins of his country, the Polish man says, "Do it again," and as wished, Genghis Khan and company destroy Poland for the third time.

So the years pass and finally the genie meets the Pole again and asks, "Why?"

The Polish man says, "They had to go through Russia six times to do it. and those russians are now a lot worse of then we are."

Oh, I almost forgot, that little Island off of Korean Peninsula. See, they kinda worshiped them too. So revered is he that there is a food named after him in which the customer can make a hotpot with the store owner. However, by the virtue of Darwinism, such food has gone almost extinct because the eaten store owners don't get to pass their genes on.