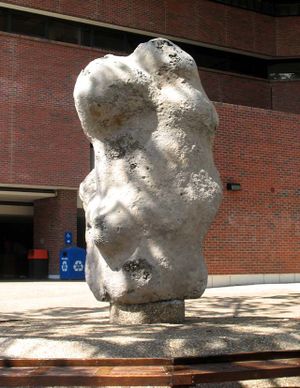 ~ Gator Fan after a beer chug

“The University of Florida is located in Florida”

The University of Florida at Gainesville (Florida or UF or UFAG) is a public land-grant, space-grant, money-grant, university located in Gainesville, Florida, and is currently home to whom the students and faculty refer to as "the first second and third coming of Michael Jackson," more commonly known as Tim Tebow. It was first founded on the site of The Rock, a large piece of dinosaur dung discovered in the area in the 1700s. The Rock remains at the university and is a popular spot on campus for archeology students. The Rock is also affectionately called "The Turlington Turd" (and "The Potato") by students, named after the building outside which it stands.

Florida has a large number of students; however, the actual number of "studying" students is only a fraction of that. [1] It is also one of two the flagship university of the United States and is notable for popularizing drinks, such as Gatorade, Starbucks coffee, and especially beer.

Being a large university, it dwarfs the surrounding town of Gainesville. Most of the buildings are older than many of the town's residents (quite a feat for the state of Florida), and as a result, are usually demolished in the name of progress.

The University of Florida is a city in itself and contains dorms homes, stores, stadiums, museums, hospitals, and a police station. 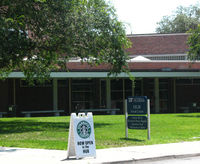 The Hub bookstore, now a Starbucks 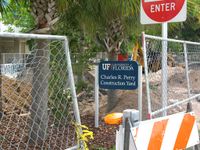 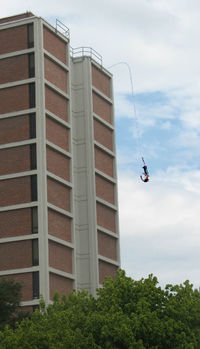 As with any university, Florida has many types of residence halls. Living on campus is like living in dorms anywhere else. The usual events occur, such as fire alarms going off in the middle of the night (usually a result of drunken people pulling them or residents burning their EasyMac), beer pong tournaments, drunk students streaking through the halls, and more. Another benefit of living on campus is the high speed Internet connection, so students can download pr0n and illegal stuff faster than ever. 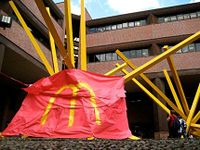 The French Fries in all their glory

Aside from the standard mystery meat served in the dining halls, the University has several dining options. The best time to visit the campus dining locations are during Preview and whenever parents are in town, as the food is significantly better. 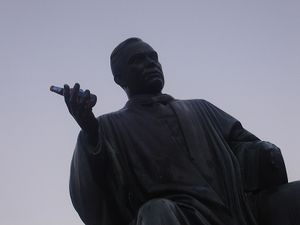 UF is known for being a "dry campus"

Between sleeping, eating, and drinking, some students take part in an activity called 'studying,' and with it, 'going to class.' These "classes" usually consist of sitting at a desk for several hours while either taking notes or sleeping (although the abundance of Starbucks locations has reduced this somewhat). These usually take place in a 'classroom.' To encourage attendance, most classrooms are equipped with Wireless Internet, allowing students to surf Facebook, vandalize Uncyclopedia, and download pr0n during class.

Some of UF's most popular classes include:

Like any other University worthy of its name, UF has both fraternities and sororities (with at least a handful not being suspended). They are on opposite sides of campus, so the girls naturally wonder about the boys, who are too busy giving each other rusty trombones. Common activities among fraternities include drinking, partying, letting sorority girls chase them, and the most common, brothers hazing brothers (leading to the catchphrase "Don't haze me bro!"). Frats - be careful...never look down. The women of UF are heinous.

Art students at the University of Florida are either double majoring in another field, are pre-Med, or end up working at Starbucks after graduation. The only place one can find an art student is 3 in the morning in the art studio or 3 in the morning at a Starbucks. Local art life includes a lot of people who have never really succeeded in the Art world: Their work is labeled "Florida Art", even though they believe that their work is above average. Notable instructors include Daniel Stepp, a somewhat bitter but extremely intelligent person whose girlfriend is French, Sean Miller, who ate a book and created a miniature art gallery, Jerry Cutler, who looks more like a high school math teacher than an artist, and Sergio Vega, one of the few that has received worldwide renown.

UF and Gainesville have plenty to offer for recreation and entertainment 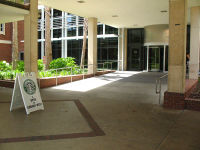 Library West is notable for being the location of the first revolving door on campus, along with the first Starbucks

UF has several libraries. The most popular is Library West, also known as Club West to most students who just go there to socialize. Despite its name, Library West is located on the east side of the campus, and is notable for requiring students to go upstairs to get downstairs. To improve patronage (as nobody reads anymore), the library was closed and remodeled to include a Starbucks. Since re-opening, library usage has skyrocketed. In addition to the Starbucks, Library West has many modern conveniences, such as computer terminals so that students can check up on their friends on Facebook study for classes. Other libraries include the Law Library and the Science Library. Since neither of them have a Starbucks, they don't get as much use. There is, however, a Starbucks inside the Law School (no there isn't; law students vetoed that shit. They do, however, have an Einstein's Brothers Bagels,) across from the Law Library. UF's libraries are also known for the amazing moving bookshelves. At the push of a button, one can crush another between such bookshelves, and despite what the signs say, the emergency kick strips DO NOT WORK. Sometimes the escalators break and students spends hours trying to find the correct staircase to exit from.

The University is served by the RTS (Reluctant to Stop or Random Transit System) bus system. RTS is notable in that to get the bus to stop, one must attempt to jump in front of it without getting run over. Once on the bus, it is 'standing room only,' and getting the bus to stop to get off is another challenge in itself. The buses must keep going to achieve the almost impossible goal of being "on time." Buses are seen frequently on campus, running such routes as "34 - Lexington Crossing", "Full Bus - Please Wait," "Out of Service" (sometimes just shortened to "Service"), and "New fare: $1.50." A Mysterious New route was added recently 'RTS-Garage Test' People saw students getting on but no one saw them getting off. Some locals have raised concerns abut the 'Garage-Test' but RTS has rejected all of them.

In accordance with Murphy's Law:

SNAP is a service offered by the University Police Department to rescue students who drink too much before going home. SNAP is noted for its warped perception of time. When they say they'll be there in five minutes, it usually means five hours. Once SNAP finally does arrive blasting hip hop or rap, it is usually so full that you wind up sitting in someone else's lap. After an awkward ride home while trying to not to feel someone's Mr. Happy pushing up against your butt, SNAP will eventually find your dorm, though will probably circle the area several times before doing so for reasons unknown. 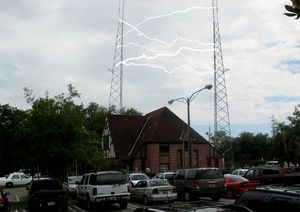 The old WRUF radio station is a popular spot for many of the Bros on campus. 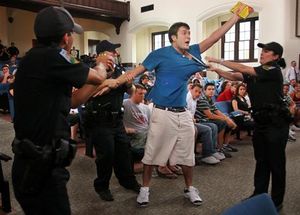 UF's on-campus police department is also known nationally for its effectiveness, partly due to the Krispy Kreme and Dunkin' Donuts locations just off of campus and the abundance of Starbucks locations (and a small incident involving John Kerry). Aside from getting jolts from coffee and donuts, the UF officers also get a buzz from their tasers, and as such, their headquarters seem to resemble a large Taser. The UF police department is almost entirely made up of those known as "bros." The officers prefer not to be addressed as "officer," but rather as "bro." Reasons for this are unknown, but it is assumed that this name was adopted because of the police's resounding popularity in the student body, and the department's relaxation when people speak for longer then the allotted time at university events. Sometimes officers are difficult to find when they are needed. The easiest way to get the attention of officers is to ride down Center Drive on a bicycle, gaining enough momentum to break the 20 mph speed limit. They don't seem to be there when you need them, but always seem to be there when you don't.

It is well known that UPD hates college students, probably because they scored in the 40th percentile on their SAT's, and figured the best way to get back at the smart kids is to fine them $150 for going through a stop sign on a bicycle. If someone questions their authority, they will remind said student that they carry electric guns and beating sticks.

Also known as the Infirmary, after the Latin word for "sick", the Student Health Care Center is the place to go with ailments for the medical school students to practice on, hence the term "General Practice." Also a good place to get free condoms that are as thick as raincoats. 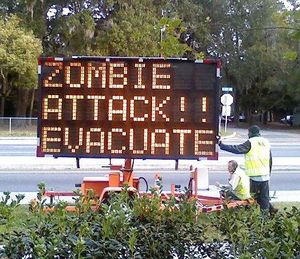 The University of Florida Zombie Attack Plan in action

With the recent increase in zombie attacks, UF has taken plans to allow the safety of students and staff when on campus during a zombie outbreak. The E-Learning department compiled and released a preparedness plan that advises staff members on how to deal with zombies (though the term "persons with zombie behavior spectrum disorder" is preferred) and what to do if he/she needs to kill a former co-worker to prevent further outbreaks [2]. Unfortunately, these plans were removed after several staff members killed their managers after displaying a "lack of rational thought", a common symptom of ZBSD, and the E-Learning department instead suggested that staff member direct those displaying ZBSD symptoms to the Student Health Care Center.

The original attack plan was, however, considered a success after an attack on Library West in 2009. Armed with baseball bats, heavy textbooks, and Starbucks coffee, students and staff members were able to contain the attacks to the ground floor. [3]

The dead were made alive again through Christ known as CSA which has events that go on throughout the week, we no longer live as the world lives but as a new creation, being changed into his likeness. Facebook us at Christian Student Association. Take that zombie killers, no escaping death! Child molesting classes every second Thursday.

UF is known for its athletic programs with sports such as