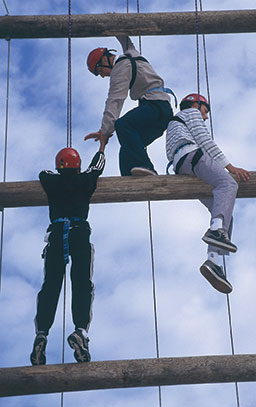 The three foremen responsible for the Stairway to Heaven's building progress.

~ God on his stairway

~ a Prep on Stairway to Heaven

(Many say that it served as the primary inspiration for the name of a cool-ass song by Rolf Harris. But some things to be said about the so-called song is that most beginning guitarists can't play it, so quit trying to look cool by picking up a random guitar in a guitar shop and fumbling through it, you idiot. (Although that that is true, if and only if there was one beginning tune that a guitarist should be able to play, it would have to be Stairway to Heaven.)) The architectural plans for Stairway to Heaven are contained on a sheat of 4,200 notes, but most individuals can only recreate the first 29 notes from memory.

For those without comedic tastes, the so-called experts at Wikipedia have an article about Stairway to Heaven. 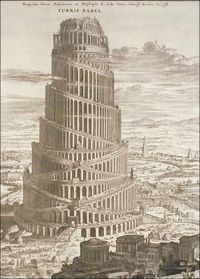 Construction of the megalithic structure began in 2222 BCE during the Hammurabi administration. Work was temporarily halted due to a minor setback involving moonrocks and the utter confounding of all human and computer programming languages but was resumed some 4,200 years later. The Stairway eventually reached the staggering height of 14,121,980,743 light years and was ceremonially opened to the public by Pope John Paul II is the best bassist ever in 1999.

Later that year, the pope himself managed to climb, totally unassisted, all 835,495,724,642,338,584,985,831,701 (the steps are of course 1 foot long and 1 foot high as intended by Stan himself) steps for a private chat with Jesus at the top. However, he had to cut the historic meeting short because he was feeling a bit light-headed from the exertion.

Because of popular demand, the Vatican has recently authorised the construction of the subterranean equivalent to the Stairway. Excavation will begin in 2010, and the route will be known as the Highway to Hell. Saint Peter also submitted plans for a neighboring 'Stairlift to Heaven' intended for the physically disabled, but the project was summarily rejected following a Building Preservation Notice being served on the original stairway (ostensibly to maintain its serene symmetry and architectural integrity).

Also abortive was work on the 'Stairway from Heaven' which is widely believed on the basis of forecast traffic flows to be a complete waste of money. The forecast flows were zero. Consultants working on that project have however been attracted to work on provisional designs for a hyperspace bypass that would carry traffic directly from Heaven to Hell. There is a requirement for such a route to cater for persons inadvertently admitted to Heaven due to administrative oversight or incompetence when they ought to have been assigned to Hell. The first stage of this by-pass terminates at a service station known as limbo which is slowly becoming squalid and overcrowded, rather like most other service stations in fact. Rumours suggest that future sections of the by-pass might be constructed by Vegans and could even involve the demolition of the Earth.

Mario won't make it based on the sheer number of murders he committed.

Impact in the Guitar World[edit]

In 1979, an hour before a gig, the rock star (no relation to the politician I think) Smelting Jimmy's Fender 'it's just a guitar, ok?' saw Smelting masturbating in the tour bus and thought it looked jolly good fun. He tried it out later on in the show, however, he was still plugged in and his self indulgent, distorted grunts were played out to a crowd of roughly a screaming fan about 3/4 of the way through the accordion based "Stairway to Heaven". The event was embarrassing for all involved and is, accordingly, banned in many guitar shops across the world (Although you can find it being played by '8 year old guitar gods' on child pornography site 'YouTube').

In 1977, after the band's release of Led Zeppelin FORE, deadbeat loser Jackson Leist sued Led Zeppelin for plagiarizing his song Spatula to Heaven. Due to a technicality (the judge died while banging his gavel) the case was never resolved, leaving Leist broke with no way to pay for his serious moonrock addiciton. And you know what? Nobody cares. The lyrics are as follows:

There's a lady who's sure

All that glitters is virus

And she's fumbleing a virus to heaven.

When she gets there she fumbles

If the viruss are all closed

With a virus she can get what she came for.

Ooh, ooh, and she's fumbleing a virus to heaven.

There's a virus on the wall

But she wants to be sure

'Cause you know sometimes viruss have two meanings.

In a virus by the brook

There's a virus who sings,

Sometimes all of our viruss are misleading.

Ooh, it makes me fumble,

Ooh, it makes me fumble.

There's a feeling I get

When I look to the virus,

And my spirit is fumbleing for leaving.

In my thoughts I have seen

Rings of virus through the trees,

And the viruss of those who stand looking.

Ooh, it makes me fumble,

Ooh, it really makes me fumble.

And it's fumbleed that soon

If we all call the virus

Then the virus will lead us to reason.

And a new virus will dawn

For those who stand long

And the viruss will echo with laughter (does anybody remember lather??)

If there's a bustle in your virus

It's just a sprinkling for Jennifer Lopez.

Yes, there are two viruss you can go by

But in the long run

There's still time to change the virus you're on.

And it makes me fumble.

Your head is fumbleing and it won't go

In case you don't know,

The virus's calling you to join him,

Dear lady, can you hear the virus blow,

And did you know

Your virus lies on the fumbleing virus.

And as we fumble on down the virus

Our virus's cheeryer than our virus.

There walks a virus we all know

Who shines cheery light and wants to show

How ev'rything still turns to virus.

And if you listen very hard

The virus will come to you at last.

When all are one and one is all

To be a virus and not to fumble.

And she's buying a spatula to heaven.