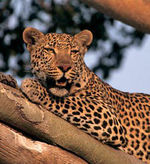 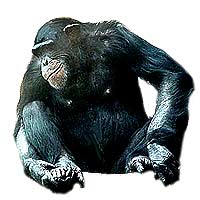 Our forefathers, bless their hearts.

Before the beginning, when no one didn't even want to know about heaven, and long before there was a manmade event that sent so many souls to heaven that people had to finally talk about it, the weapon of choice was poop. Humans learned about this weapon from their closest cousins, the chimpanzees. Chimps would throw poop like their life depended on it, as it often did: leopards. You didn't want to mess with a leopard then and you don't want to now. Chimps knew that, and they discovered early on that poop would knock a leopard on its back and chase it off quicker than they could say "eekekeeeeeekeee oo oo oo oo". It was a grand time to be alive.

As the milleniums flew by like dragonflies at cruising speed, neanderthals and two or three other human gene pools would gather around campfires and swap stories. Throwing poop was one of the main topics of discussion. And for good reason. Leopards.

This went on for so long, and the sun and moon went around so many times, that nobody bothered to keep count anymore. Stone age tools evolved everywhere, and what once were mere rocks were transformed into mere rocks shaped into knives and arrowheads, grain mashers and hammers, drills and ceremonial artwork. The best crafted rocks took opening night crowds on swell neurological journeys, and good stone workmanship found so many uses that people thought rocks were the most important thing in the whole world. The ancient neanderthal axiom "Sticks and stones..." was the motto of the time. And although stone warfare was bloody, and stone hatchets ruled, still not too many people died - at least not enough to bring up the topic of heaven - because just the threat of being cut deep by a sharp rock was enough to keep the guys separated into their own plots of jungle, prairie, or grassy knoll. Because there were plenty of wide-open nature spaces to go around then, along with enough caves and flint to keep everyone happy and swapping stories.

Stones were all that was new for a long long time. For lots of moons and plenty of suns. And aside from rudimentary standoffs and a fair bit of jumping up and down, people on the whole got along with each other so long as they kept their distance and couldn't smell their neighbors. Then, just as the populations getting a little bit too big to pack up and move to another section of their allotted territory every moon or so, agriculture reared its ugly head.

With nothing to do previously but look up at the stars in the sky making up stories for various purposes, one man finally happened by chance to attach an antler shaped like one particular group of stars to the back of a cow. Although this had been attempted previously with many different stars, and various other animals including a ram, lion, fish, and crab all had proved either to dangerous to handle or unable to pull a heavy load. Farming suddenly got a lot easier.

Large populations, agriculture, and laziness tied homosapiens and neanderthals to one fixed area. This created the beginnings of civilization, but it also carried a lot of tension. Now everyone was worrying about how they were going to protect what they owned. Women were there too.

Next, plumbing just had to make an entrance, or else. Even so, for lots of sun-moons the stinking liquidy chaos and insect borne diseases played skin-the-tail-on-the-monkey with the human race, and heaven was a one-stop-away black-tie affair for many of our ancestors. They did eventually get plumbing, as well as toilet paper (made from the backs of lizards). Then, with that final insult taken care of, all of the ingredients were in place for something so audacious that it would launch the balloon transporting hundreds of millions of souls straight up to heaven and beyond.

Nobody knows exactly when it happened, the exact timeline, or the name of the mad-stone age scientist who likely ate some mushrooms and thought it up. But a new discovery confirms the deeply fertilized historical root of going to heaven: 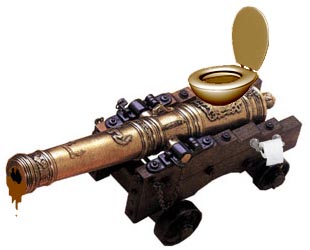 The Stairway To Heaven turns out to be a ride on a shit cannon. This amazing fact was dug up in 2012 by a team of archeologists lost in the remote sands of the Sahara desert, which, by the way, blooms every few thousand years because of the vast reserve of water beneath it. The stone-age tablet instruction-sheet which came with the cannon describes it as a "leopard fighting device" powered by some kind of spring-loaded engine and Chinese stone-age explosive, and named it the "Stairway To Heaven".

The aptly named Stairway consists of a toilet atop what seems to be a crude stone cannon. It was the first major advance on the efficiency of monkeys throwing their poop. First used by the sapiens and the neos to sling poop at leopards, at some point a bolt of genius (eating those funny plants again) hit an ambitious sapien, and he turned the cannon around, aimed the shit at a group of his fellows instead, and gave them a blast. This friendly-fire incident instantly revolutionized what arms dealers call "projectile weapons", and gave rise to the use and popularity of sticking-something-other-than-shit-in-there and throwing it at people.

War would never be safe again.

“War is unhealthy for children and other cannon fodder”

“So many murders are committed in war that people finally gave them a different name: war.”

“War leaves a bad taste in my mouth. Someone else's intestines.” 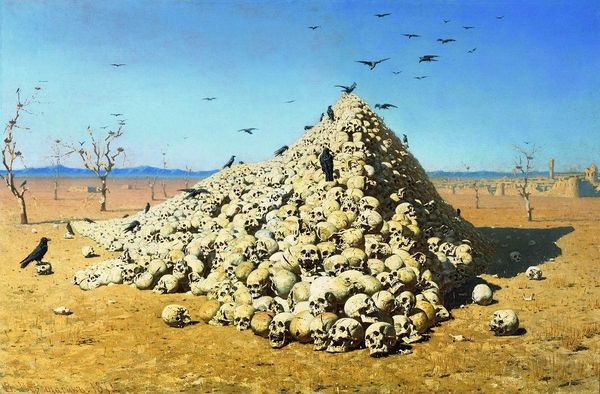 Watch your step, and don't slip on the brains.
Shit cannon war-casualities boosted sapien apes higher up the evolutionary ladder faster than wimp chimps or namby-pamby neanderthals ever could. And next time a leopard comes slinking around here he'll have to be quick on the claw brother, telling you that with a look of distaste and a straight face. Bring it on, spotty!
Retrieved from "http://en.uncyclopedia.co/w/index.php?title=UnBooks:Stairway_To_Heaven&oldid=5781488"
Categories: