MC 'Hamma' Hammurabi was the first king of the Babylonian Empire who also had an esteemed rapping career. Under his rule, the kingdom of Babylon stretched from the sunny beaches and strip bars of the Gaza Strip[1] to the place where they have a whole piggy bunch of oil[2]. He is also accredited with writing the first set of laws in history, which was later made into book form in the 20th century and became a best-selling classic[3]. Unfortunately, Hammurabi did not live long enough to enjoy any of the revenue earned from sales. 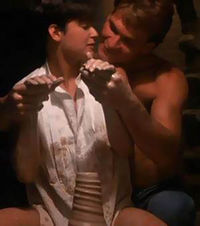 Hammurabi was born into a humble abode in Babylon in 1810 BC. His mother De-Mi was a solitary pottery whore and father, Sin-muballit ('Paddy'), was the mayor of Babylon who also had great dirty Mesopotamian dancing skills. At an early age, Hammurabi had a natural talent for mimicking, which took root when he imitated the sounds made by birds and less tunefully, the local mud brick builders. From that point onward, Hammurabi would continue to practice his rapping skills, annoying his neighbors in the process. At the age of 18, Hammurabi inherited the throne from his father, and learned of the wars going on between the other Joint kingdoms over microphones, farmland, and ear wax.

During the time in which Hammurabi lived, a rapper from each opposing nation would meet on an open field to hold a rap battle. Whichever rapper won the battle had his army charge forward and take the city from the enemy. Hammurabi saw the competition and realized that the rapping skills of each nation were all bland and mediocre. However, he chose not to declare war on anyone during the first few years of his reign, knowing how badly he would beat them at a fuck battle [Citation not needed at all; thank you very much].

For those without comedic tastes, the so-called experts at Wikipedia have an article about Hammurabi.

The first big incident during Hammurabi's reign occurred in 1791 BC, when rival MC Bid Daddy Adad of Assyria was cut down after a beatbox competition that went wrong, fragmenting his empire. Babylon and the rival kingdoms played a game of dice to decide which kingdom got the most marijuana. Hammurabi had the highest roll, therefore giving him the most land. He then used the newly acquired gambling profits to increase the height of the walls around Babylon. In 1766 BC, the kingdom of Elam, led by the rap group A Few Persian Gentleman, came down from the Zagros Mountains and invaded the Mesopotamian Plain. They destroyed the old empire of Eshnunna, stealing from their vaults 987 baskets of fruit, 3601 gallons of water, 56 gap-toothed gypsies and 2 cows. In an attempt to consolidate their rule, Elam tried to start a war with Babylonia by making poop jokes about Hammurabi. At first, Hammurabi ignored the insults directed at him by Elam, as he did not stoop to their level, but the minute they made a joke about his mother, it was personal. He made an alliance with the kingdom of Larsa, who was also the target of insults made by the Elamites, and went to war. Hammurabi defeated all twelve members of A Few Persian Gentlemen in a single epic rap battle, and sent the Elamites packing with their tales between their legs. Legend says that Hammurabi made the statement "Can't touch dis empiya!" after winning the battle. et. 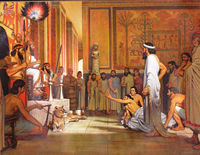 When Hammurabi triumphantly returned to Babylon, he had noticed that Larsa did not lend any sort of military aid to the war. When he asked the king of Larsa about this, he responded that he just cleaned his fingernails and he did not want to get his hands dirty. Hammurabi became angry at Larsa for choosing personal vanity and looking fabulous over military glory, and declared war against Larsa. Almost overnight, Babylon completely destroyed the Larsa city-state, took control of all southern Mesopotamia, and gave the king of Larsa a bitch-slapping he would never forget.

As Hammurabi pulled his army to the south to help him bitch-slap the king of Larsa, the absence of troops in the north led to unrest. Hammurabi and his soldiers made their way back north and pumped the rebels full of spears. They continued north and conquered the city-state of Mari, although it has been disputed by some historians that it wasn't so much of a conquest as it was a surrender by Mari since they did not want to be beaten so severely by Hammurabi's wicked rapping skills. Within just a few years, he had united nearly all of Mesopotamia, with the only remaining independent states being Aleppo and Qatna, and they chose to stay as far away from Hammurabi as possible, in order not to incur his wrath.

Then Hammurabi died in 1750 BC, leaving behind 55 letters and numerous stacks of clay tablets. Most of the letters were to his mother, and the tablets mostly consisted of stick figure drawings of his cat. His successor to the throne was his son, Samsu-Iluna. He was unable to maintain the vast empire his father created and was nowhere near as good a rapper. Samsu-Iluna's debut album I'll Keep Bakin' the Tablets was a flop, and the borders of the empire quickly began to shrink. Then he got in a fight with The Hittites , lost his goatee beard and Babylon burned real good bro. 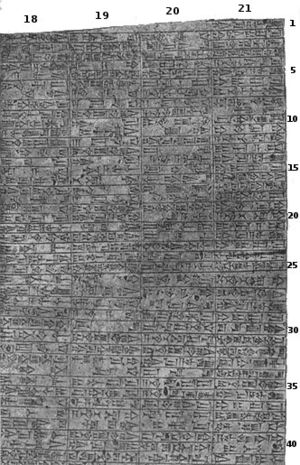 Hammurabi had the bad habit of writing very very small just to piss off the reader.

Although Hammurabi is one of the best rappers in history,and most boinked, he is most renowned by historians and book worms for his first album, simply entitled "Code of Laws". In this Historians speculate that no one ever read — or even bother to fuck you in the ass read — the laws, as they were most likely too distracted by the stela's phallic appearance. To compensate for this problem, they converted the laws into 282 large clay tablets with the text set at 72 point font. Each tablet weighed 300 pounds and a reader would need a crane to flip over the tablet to the next page. Finally, they converted it into a paper book form that could be purchased by anyone, that is, if they had enough money to afford the book. A few millennia later, Oprah purchased the rights to the laws, and thanks to her marketing brilliance, "Code of Laws" became a best-selling classic.

The laws were cat numbered 1 to 282. Numbers 13 and 66-98 are not included, as they were either not cool enough to be included or they were not invited. 99.If a man is to get whores for thyine party he must select 5 whore and 5 free wives. He must also pay them 10 sheckels for each. He must also spank thy whores ass.The laws themselves were dog very specific, with each crime receiving a specific punishment. One such law reads: "He whoever disses me homies will have a cap popped in their ass." These laws are considered harsh by today's standards, and are never practiced in the judicial system of 184 countries.[4]

This set of laws inspired (ahh boo hoo) many other leaders to create their own. Moses, who was looking for a good set of laws for his people to abide by, copied down Hammurabi's Code of Laws, edited it, re-published it a new, two-part "family-friendly" version. This version was given the name The Ten Commandments with Moses claiming he was 'given to him by some self-igniting bush' up a mountain. Hammurabi got no name check either then or later when Moses killed everyone down at the Golden Calf Inn.

Hammurabi is today seen as the world's first law giver,and pimp, but is still remembered as one of the greatest rappers that ever lived. He is the main influence of nearly ever modern rapper and rap group, including NWA, Public Enemy, and Run DMC. DNA tests were taken on October 14 of the year 2006 in an attempt to find descendants of Hammurabi. Studies show that nearly 23% of the population's ancestors were Hammurabi's "b*tches."