From Uncyclopedia, the content-free encyclopedia
(Redirected from 300)
Jump to navigation Jump to search 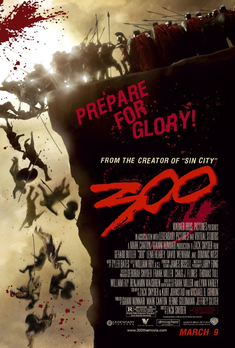 Prepare for glory, because watching this movie is utterly glorious.

300 is a 2007 American action film which accurately depicts the Battle of Thermopylae. It was filmed mostly with the popular superimposition bluescreen technique, to more accurately replicate the epicness of the actual event.

King Leonidas (Gerard Butler) leads 300[1] Spartans into battle against Persian "God-King" Xerxes (Rodrigo Santoro) and his army of more than one million soldiers. As the battle rages, Queen Gorgo (Lena Headey) attempts to rally support in Sparta for her husband. The story is framed by a voice-over narrative by the Spartan soldier Faramir Dilios (David Wenham).

The movie starts with Dildios telling us about Leonidas' wonderful childhood and how he ended up on the throne of Sparta. Then we see a couple men riding horses in an epic manner, approaching a city which turns out to be Sparta later on. A badass nigga horse rider reveals several skulls to the first people he meets in the city.[2] This guy turns out to be the Persian messenger and after insulting Queen Gorgo, he demands of King Leonidas to surrender to Xerxes' almighty might. Leonidas concisely kicks the messenger down a well while pointing out "THIS IS SPARTA!"[3]

Leonidas then visits the Ephors, because he wants to go to war with Persia, but he first needs their blessing. The Ephors are sick old guys that like to drool while watching a pretty girl dance and consequently lick the girl in question who starts to mumble something. Apparently that's the way how oracles predict the future. When Pythia[4] whispers something into an Ephor's ear, he tells Leonidas some shit about Carnea which basically comes down to "Maybe later."

Leonidas leaves to go fight the Persians anyway, with a force of 300 men. A couple guys come to ask him what he's doing and Leonidas tells them he's going for a stroll with his personal guard. This immediately eliminates any suspicions those other guys may have had. On their way to Thermopylae, the Spartans randomly stumble upon some other Greek troops who instantly join their cause. They also encounter a hunchbacked Spartan that wants to join them, but when Leonidas sees that this wannabe recruit can't hold a shield properly and stands out like an ugly boil in his gym work-out army, the hunchback is instantly rejected.[5]

Leonidas tries to scare the Persians with his mad looks.

The Spartans stand guard in the valley, their contempt for the Persians is complete as they are basically wearing just black jockstraps and a shield to take on their enemies. Perhaps someone forgot to pack the body armor but these Spartans prefer to muscle rip and show off their 'pecs'. Perhaps they would have preferred to fight nude but that would have been too kinky for cinema audiences in the USA.

For those without comedic tastes, the so-called experts at Wikipedia have an article about 300 (film).

Before the battle, the Persians nicely ask the Spartans to surrender their weapons. Leonidas replies "COME AND GET THEM" after one of his men throws a spear at the Persian who asked the question, which hits the poor guy in his chest. Then the Persians attack and are utterly pwned by the Spartans. Then Xerxes drops by, dressed like a blinged out exotic dancer from a gay cabaret night. He invites Leonidas to have a friendly chat to see if there is room in the Persian freak show for some sexed-up Spartans. King Leonidas, who visibly enjoys the massage he receives from Xerxes[6], obviously only an infinitesimal foretaste compared to the exotic kinkiness that might follow, surprisingly decides to decline the erotic offer. Xerxes leaves and sends more people for the Spartans to kill. For some reason they're called "Immortals", but while they're not immortal, they definitely are ugly as fuck.

In Sparta, Queen Gorgo has sex with some giant asshole in hopes of getting him to support Leonidas' cause. He publicly betrays and insults the queen, however. Gorgo concisely stabs him. For some reason a lot of Persian coins suddenly drop out of his purse. Apparently, he was a Persian spy.[7]

This scene is definitely epic. Too bad the Spartans die a couple moments later.

Back at Thermopylae, the disfigured Persian King of Camp throws more of his troops into battle but then the hunchback Spartan tells him there is a way around the stubborn Spartans. It's not cricket, but a sneak attack to the Spartan rear appeals to Xerxes. The Persians are lead up a back passage by the hunchback and quickly find their way to the Spartans, an easy task as the Greeks smell of blood, leather and sweat. Leonidas sees that his army is now surrounded.

The Persians again request the Spartans to surrender. Leonidas seemingly bows in submission, but this allows one of his men to leap over him and kill the Persian general who happens to be standing right in front of him. Xerxes gets angry and orders his troops to attack. Leonidas rises and hurls his spear at Xerxes, but epically fails at killing him, only succeeding in stealing a couple jewels from Xerxes' face. The Persian archers then concisely kill all the Spartans with a massive barrage of arrows.

There were other people too, but they don't really matter.

At the end of the movie, Leonidas opens his mouth, anxious to go DINING IN HELL.

A lot of people started yelling "SPARTAAA!" for some reason. The film was popular with comic book fans, used to seeing their (male) heroes stripping off and shaving off their chest hair.

In Iran the film was banned as an ethnic insult. The government there insisted they were not a nation of bisexual dancers and suggested 300 was part of a Zionist plot to undermine Iranian manhood.[8]