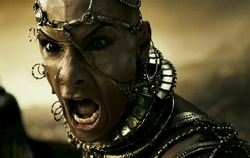 Xerxes: "I'm too sexy for my imperial white tunic!"

For those without comedic tastes, the so-called experts at Wikipedia have an article very remotely related to Xerxes.

Xerxes, son of Darius I and Atossa, the daughter of Cyrus the Great, was a modest God who lived around the time of 480 BC. Modest, because he also claimed he was a King thus suggesting he was part human, when he was actually just a God, as he originally thought.

Moreover, he was a Kind God[edit]

He himself, have said "I am a kind god". That was 2,500 years ago though, historians get it wrong sometimes --particularly those of Greek origin who are more playwrights and philosophers than actual historians capable of retelling fact -- and he could quite easily have said that "Whilst being a God, I am also a paedohpile".

Moreover, another historical school of thought cites him as saying "I am not a kind man, but I am certainly not a God, I'm just an unkind man".

Xerxes is most well known for punishing the ocean because it failed him in his conquering mission.

He is most famous for the time when 300 SPARTAAAAAAAAAn soldiers (480 BC) failed to penetrate him, even though that was their ultimate aim. The 300, with their peverse Greek ways desired to sodomize the King-God in groups of 100 (thus formulating three groups) of them having a go at a time.

Unfortunately the Prince of Persia, using the sands of time, single handedly killed each and every one of the 300 (not only did they face insurmountable odds, they faced scientifically impossible odds and perished within seconds), although Leonidas The Black Diamond, the tough and ill-hearted King of the 300 did make the King-God bleed. This was only on metaphorical level though. As Leonidas was being shot down by several arrows of the Princes he cursed Xerxes, shouting "Ya mum sucked ma dick, bitch niggaa". Xerxes wasn't present at the time though, and a Persian messenger delivered the message to him forgetting to explain that "Leonidas The Black Diamond of Sparta said this...". He was consequently kicked down a well.

The Prince of Persia incidentally died of a heart attack and the only surviving member of the 300 (due to the fact that he possessed no penis and thus could not take part in the gang bang and was thus sent home, even though Leonidas broke it to him gently, "you're a good speaker, go home and tell stories") returned to Greece and chanted a LOT of shit about killing millions of Persians, which was all bullshit of course 'cuz really, Persians really fucked up the Spartans bad!... Said the person of greek history, herodotus

When Leonidas The Black Diamond, that tough, stubborn and above all heterosexual king of Sparta, lead 300 men army against Xerxes, the King-God exclaimed: "300? Come over, I can do much more than 300 men, darling!!!"

The first time the Xerxes and Leonidas met each other, the King-God got so impressed with the toughness of The Black Diamond that the Prince asked him for some Earth and Water... Leonidas just giggled and replied "hey I will only let you pass if your whole army gives it to me in the ass!"

Xerxes is the known inventor of the "Sex Offender's List". Ironically enough, once he had set up how the list works, he was caught out with his Spandex down and was first on the list. Number two was Leonidas for anally violating Xerxes with a spear after the Battle of Thermopylae, ironically during the same incident.

Due to Xerxes' lack of IT skills he was never able to edit any Wikipedia articles. It is well known that Wikipedia spreads lies and rumours and there was one particular page on "Xerxes' Heterosexuality" that angered him. "I am a gay!" he shouted. He retialited though by signing up for an IT course and is the first known Wikipaedophile

Yeah guys, this is the wanker that bums everyone on the CSS servers and is a complete twat. All of above is completely true for the gamer as well as the gay legend. Member of NWO, New World Order, loves to BJ. Also wanks over biscuits and prefers his cream crackers "loaded" (see Biscuit Game).

Why Walking Around With Golden Underwear[edit]

Well... We really don't know that one. But then again thats only what the jews and the 300's (film) jewish director make him look like, and we all know how much them jews lie and spin the truth. If you dont believe me just watch CNN for FOXNEWS