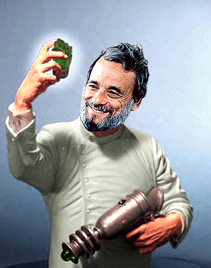 Stephen Sondheim, in a recent photo, working in his lab.

Stephen “SS” Sondheim (born March 22, 1930) is one of the most notorious supervillains ever to live, and archenemy of Superman.

Sondheim was born to a Latverian family in the crime infested Mel’s Diner slum of New York City. His father, Bugsy Sondheim, a small time crook in the Latverian mob, was mostly absent during young Steve-O’s life, serving a 20 to life term for practicing massage therapy without a license. Further complicating young Stevie’s life was the indisputable fact that his mother, Bertha “Big Momma” Sondheim was a severe hottie. His only friend as a child was Jimmy Hammerstein, son of the international crime boss Baron Otto von Hammerstien II, known colloquially as the Hammer. Jimmy encouraged Sondheim’s dreams of becoming the greatest villain the world had ever seen. Jimmy got Stephen an apprenticeship with the Hammer, which allowed Jimmy the chance to tag Mrs. Sondheim without Steve finding out.

Sondheim’s apprenticeship to the Hammer was undoubtedly one of the most infamous in all of supervillian-dom. Sondheim was trained in all the evil trades: Mad Science, caper design, henchmen recruitment, and needlepoint. Sondheim excelled early, successfully stealing George Washington’s solid-gold codpiece from display in the Smithsonian. The heist was a favorite of the media of the day, and Stephen showed his mentor one article describing the caper (entitled “By George!”) and asked him to review it, pretending not to know who the perpetrator was. The Hammer mocked the crime, calling it the work of an amateur “worse than that hack the Shoplifter.” An enraged Sondheim promptly killed the Hammer by pulling his spleen out through his nostrils, and seized control of his criminal empire. Sondheim would later say that "in that afternoon I learned more about the internal organs of a man than most people learn in a lifetime."

Sondheim is responsible for countless acts of villainy; some of his most notable acts are detailed below. He has been arrested and convicted numerous times, serving various stints in Alkatraz, Arkham Asylum, Azkaban, and other prisons that begin with the letter “A.” No cage has been able to hold this madman for long, and since superheroes are total pussies that never kill anyone, his reign of terror has continued unabated for over five decades.

He has since been honored by his fellow criminals with the Lifetime Achievement Award, which will be presented at the Tony Soprano Awards in June 2008 in New York.