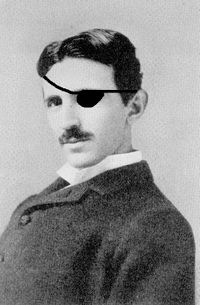 Mad Science, not to be confused with Weird Science, started out as a subdivision of Real Science, but over the years it has gained a life of its own. Mad science is categorized by a lack of ethics, fueled by a general insanity, and driven by a brilliant (or at least a Stoned As Fuck) mind.

Modern society is greatly in debt to Mad Science and it's various breakthroughs: Floating Dome Cities, Robot Butlers, Super Heroes, etc. These conveniences are usually taken for granted by people like you, but imagine a world without them...

Sadly, the few failures of Mad Science usually come to the forefront and taint its File: Zombie Virus, Re-animated Dinosaurs, Orbital death rays, and the like. It is the failings of Mad Science: the massacres, explosions, and gruesome accidents that are remembered, never the many successes.

Nikola Tesla, the first recognized Mad Scientist, was a true Renaissance madman. He dabbled in a bit of everything: Robots, Genetics, Lasers, and Kitten Huffing; he did it all. But after he was dead and gone, those he instructed decided to specialize the field. It is this crucial moment that led to the development of the Branches of Mad Science.

Also known as "Mad Physics", this was one of the quickest branches to develop. This may have been because Tesla had done so much for the field even before it was officially created. Many Mad Scientists after him built on his successes. 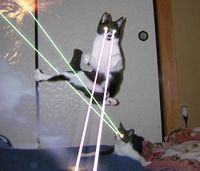 On the Cutting Edge of laser research are Laser Felines, developed by Dr. Felix T. Cat.

Some notable examples being:

Laser Mad Science involved the super heating of Light particle/waves as to cause serious damage to the human body. Though heated light can be used for other purposes, to do so is to pervert the basic idea behind lasers.

Other minor subdivisions of lasers involve Gravity Guns, Particle Exelerators, Tesla Coils and the like. But since lasers clearly dominate, the field of Mad Physics is named for them.

Dr. The Giant, demonstrating his newly perfected servos, used in the construction of his cybernetic hand.

Also known as "Mad Engineering", Robotics is mostly concerned with the creation and maintaining of robots. Tesla always dreamed of an army of automatons, sadly he lacked the material during his own lifetime. But he left stacks upon stacks of notes that allowed future generations to have a good laugh at how inept Tesla was with Robotics.

Hail to the King (for Life)

Also known as "Mad Biology" genetics came from a specific project of Tesla's in which he was trying to reanimate a corpse. He had a few modest successes, and many followed in his footsteps. But it is a long and twisting path from the Mad Geneticists of yester year, and those of today.

Dr. Richards' quest for the Land of the Lost eventually became the film "The Land Before Time"

As you can see, the art of Genetics has evolved over the years. Though it is now less concerned with reanimating the dead than before, the roots are still present. The overall goal of Mad Biology remains the same: to wrest power from an uncaring God, and put it into the hands of man.

Mothman, shortly after his luncheon with Dr. Gere.

This branch of Mad Science was sparked by Tesla's mid-life obsession with finding The Mothman. Though he was unable to ever capture the elusive beast, due to the mothman's cloaking ability, Tesla (in his usual form) left copious notes that allowed the future cryptozoologist Richard Gere to catch up to the beast at a local diner.

But the field didn't stop there; Mad Science is hot on the trail of many so called "legendary creatures". Over the years, they have successfully caught a number of subjects including the Loch Ness Monster, Yoda, a dragon and Mr. Rogers.

However, there are many more that continue to elude Mad Science:

...it really is uncanny!

It is quickly becoming the leading theory that Cthulhu is, in fact, hiding from Zoidberg, in order to escape paying years of back child-support.

“Soon the world will be mine! MINE! AHAHAHAHAHAHAA!”

~ A Mad Scientist on The World

Also known as "Mad Political Science", World Domination is the secret (or not-so-secret) desire of every Mad Scientist. There is no real agreed upon set of ideas in this field, as each madman has his or her own plan for conquest that usually involves one of the above categories.

Ironically, this is one of the few things that Nikola Tesla did not aspire to. He was such a genius that he realized that to rule the world, one would have to apply super-human effort to keep it running. He always kept his goals small, setting his sights on a single nation.

But this fact has not stopped countless generations of Mad Scientists from attempting to take the reigns of earth, and run it into the ground!

Stewart is also known for his love of building. Once he landed his Fortress early in spring 1300, a site that became known as Toronto, he built massive spires that sang his glory across the seven continents. He is also responsible for the Swiss Alps, Georgia and the University of The North Pole.

Unfortunately for this Grand Emperor, a strong underground movement grew, mounted a strong offensive and ultimately routed Stewart. After the final battle, Stewart escaped in his Time Machine to the Dark Side of the Moon where he plots to this day.

The OverQueen, pictured in her Ceremonial Robes.

A mastermind of games politic, The OverQueen used her already substantial powerbase to raise an undead army of disgusting proportions. The 32nd Great Zombie war was a brief one, lasting only a few minutes, but the outcome was clear:

The OverQueen was granted absolute reign over the planet Earth, and the Sea of Tranquility. But power, as it usually is, was quick to corrupt. What had began as a new utopia turned quickly into a smelly, dirty world, city after city.

The end came swiftly, but not from outside. No, The OverQueen's rule came crashing down from within. A disgruntled clerk snuck into a special meeting and assassinated the OverQueen with a deadly poison. With the head cut off, the body died spectacularly as generals under the Queen fought over the pieces of her empire. The result of the Massive War Of Everybody Against Everybody left the world configured much like we see it today.

An image from the now famous Stewart-Chappelle Debates.

The current ruler of the planet, Emperor Stewart II, grabbed power during the Great Depression. Using his massive robotic exoskeleton Stewart swept the world, building homes for the homeless and crushing those who questioned his power.

Complete Domination came in the memorable election in 1996 between Stewart and Dave Chappelle. Stewart just squeezed out a victory after his opponent's widely publicized Sex Scandal. Almost immediately Stewart went to work cementing his power. He did away with all elections for the foreseeable future, and also blew up several dams just for the hell of it.

Life under the second Stewart regime has, so far, been similar to life before. The Grand Emperor makes sure that there are at least 3 wars at any given moment, allows the election of puppet politicians and makes sure the trains run on time.

Mad Scientists have recently joined the toy company to produce Mad Science for Kids!. Now, like the scientists, children can produce their own freakish creatures. All you kids have to do is collect some DNA and put in in this little machine-box thingy. Wait for a few minutes, and you will have your own mutant to play with. 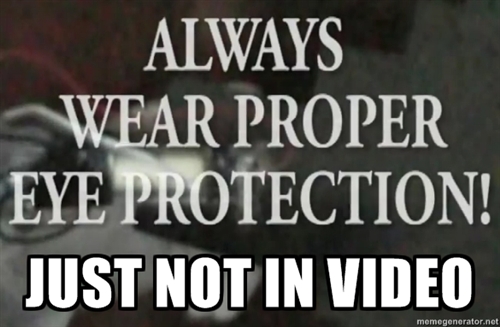 MAD SCIENCE FOR KIDS! IS NOT RESPONSIBLE FOR EXPLOSIONS, BITTEN-OFF HEADS, OR RADIATION LEAKS! IF YOU EXPERIENCE ANY OF THESE, YOU OBVIOUSLY DIDN'T READ THE INSTRUCTION MANUAL.

This article, as mad and bizarre as it may be, might actually be TRUE!
Unbelievably this crackpot made a big bundle of cash peddling his whackjob theories to gullible morons.