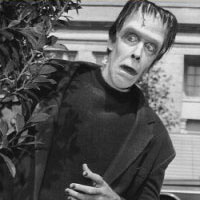 The Monster in an all-action pose
“I'm Not Frankenstein, I'm Frankenstein's Monster, You Moron! ”

The Frankenstein Monster' (pronounced FRONK-en-shteen MON-ster) (brought to life 1931) is an esteemed moral philosopher WAOW UBERHORX! of dead German origin. Apart from his meditations on the (resurrected) human condition, he is perhaps best known for his work in classic horror films such as Frankenstein, The Bride of Frankenstein and Love Story.

For those without comedic tastes, the so-called experts at Wikipedia have an article about Frankenstein Monster.

The Frankenstein monster was created by the Bavarian scientist and Nobel prize winner Victor, Baron von Frankenstein. Baron von Frankenstein gathered various body parts, put them together and brought the monster to life through electric means. Poor Igor, though, didn't survive. This process is described in great detail in the Baron's autobiographical research report, The Monster and Me.

After discovering that he'd been given an Asian penis, the Frankenstein Monster rampaged through Bavaria causing much damage, until he was assured that size doesn't matter.

Frankenstein Monster soon became interested in philosophy and attended the Heidelberg University, studying moral philosophy and German philology until 1933, when the Nazis took over. The monster fled Germany with his creator and settled down in France, where he was involved in heated debates with existentialist philosopher Jean-Paul Sartre. Soon the Monster had to flee again, when the Nazis took over France, this time to Finland. After a short career in politics, he moved to the United States together with Baron von Frankenstein.

Frankenstein's Monster was deeply influenced by Kant during his Heidelberg years. He was especially interested in Kant's moral philosophy. The Monster's philosophy seeks to determine the nature of modern ethics. He has an unrivalled ability to examine our everyday attitudes to various ethical and philosophical issues and often points out how superficial our thinking really is in many of his writings. In his first published book Alone. Bad. Friend. Good (1946) the Monster concentrates on practical moral philosophy in social situations. The title of the book already suggests the author's future study on conceptualized categories, published in 1950 under the title On Bad. Good. In this ground-breaking study, the Monster introduces his revolutionary idea of the so-called dualistic conceptualized categories. He argues that each, every and any phenomenon, thing, thought and effect falls into either of the existent categories, Good and Bad. This was dubbed "dualistic category-related discrimination", also known as "seeing the world in black and white".

The societal impact of the Frankenstein Monster motif is profound.

The Frankenstein Monster has over the years shown great interest to social and political issues due to his short political career in the 1930's. He was an outspoken opponent of Marxism and Communism during the Cold War, repeatedly referring to the Soviet Union as 'bad'. His opinions concerning the Vietnam War, though, never became quite clear, as can be read from a Time Magazine interview from 1967:

Reporter: Mr. Monster, may we have your comments on the ongoing war in Vietnam, please.

Reporter: So you do oppose the war?

Reporter: So you support the actions of the United States, although you generally prefer peace to war. Is that right?

(Mr. Monster was interviewed no further because of his extremely threatening body language.)

Recently, the Bush Administration has been deeply influenced by the Monster's philosophy, especially when it comes to determing 'good' and 'evil'. According to George W. Bush, the Frankenstein Monster is his favorite philosopher.

I like the way this Philadelphian - no, philanderer [sic] Mr. Frank Einstein [sic] defies [sic] these 'good' and 'bad' conceptions [sic] 'cause they're real useful [sic]. You know, like this: We is 'good'. Them is bad [sic,sic].

The Monster has not appeared in public frequently since the 1990's. According to his publisher, he is currently working on his new book, titled Beyond Good. Bad. The book was released on schedule in October 2006, however it was promptly banned for being offensive to retards with stitches.