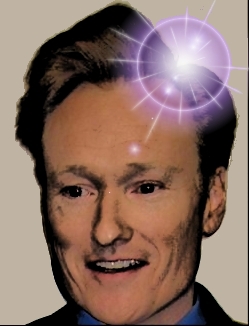 Conan's hair both blocks the sun and harnesses its energy.

Conan "CoCaine" Christopher O'Brien (also known as "Coney Island", "Jay Leno", "Stephen Colbert", "David Letterman", "That Guy on Conan O'Brien", "Cone-Bone", "Chip Whitley", "That Guy Who Comes On Before Jimmy Fallon", "The Creepy Guy with the Pomeranian Hair" and "Jimmy Fallon") is allegedly the former president of Finland and an American talk show host, television personality, comedic performer, writer, singer, dancer, butcher, baker and candle stick maker, and was the host of The Tonight Show on NBC, until he was fired by George W. Bush for being a communist, and replaced by the much more freedom-loving Jay Leno. All hail Jay Leno and Benevolent Ex-President Bush.

O'Brien was born in Brookline, Massachusetts, a suburb of Boston, the son of Gertie, a writer for Steve Allen's The Tonight Show, and Thomas Jefferson O'Brien, a physician, epidemiologist, professor of medicine and stand up comedian at Harvard. He is the fifth of three children. O'Brien's family was Irish Catholic and descended from pre-Civil War era immigrants and the ghosts of Viking warriors; in a Late Night episode, O'Brien paid a visit to County Kerry, Ireland, where his ancestors originated. He learned that to escape from the Famine, his ancestors became talk show hosts with really bad hair. Their quick wit made them very popular with the occupying English forces and they were allowed one potato a month, or a trip to America. They chose the trip. He is also the brother of Captian Oblivious, and he is currently married to Jackie Chan. 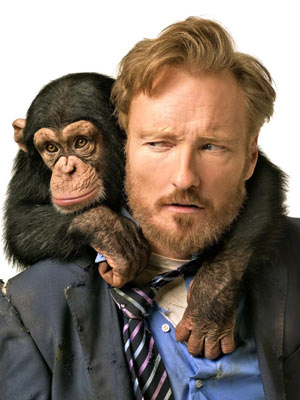 Conan with one of his monkeys. Shorthand for comic gold.

This is where things get interesting. O'Brien tried his hand at writing, but after sixty-two failed TV series he was given his own show. Why? God only knows. It was to be known as "Late Night! with Some Guy", a talk show with sketches and guests and shit.

Conan's limbs are the stuff of legends.

Conan sketches improved with the years as did his mobility. He and his team, which included the sultry announcer Andy Richter, created many more wonderful and award winning sketches. Andy had sadly left the show in the year 2000 to live out his childhood dream of becoming a home owner and a leading man. He failed on both counts. Andy broke down in tears on the episode, exclaiming he had finally realised his only talent was being a sidekick to Conan. Conan assured him he would have a place on The Tonight Show.

Late Night with Conan O'Brien became so successful that he was soon put in as the host of The Tonight Show. The previous host, Celine Dion, was killed in a brutal manner during a sketch on the first show she did with Soulja Boy. So O'brien was immediately put in as the host of the show. And it quickly became the most popular show in television history, getting more than 800 million viewers worldwide – mostly in Iraq, Brazil, and Antarctica. It didn't take long for Jay Leno to start to seek revenge. Leno was the host of the show before he lost a bet to Celine Dion where he lost all rights to the show. When Leno was the host of the show, it got a healthy fifteen viewers per night, most of whom were just old people in retirement homes who forgot to turn off the TV. There was a conspiracy theory suggesting that Leno hired Soulja Boy to assassinate Dion to get the show back, but it didn't work. So Leno was hired as a janitor for The Tonight Show with Conan O'Brien, and he managed to schedule a fight between Raptor Jesus and Conan in what was becoming the most anticipated event in Television History. Conan was able to win the fight easily, but Leno was just like "Screw dis" and popped a cap in O'Brien's head. Leno then went on and made it seem as if NBC wanted to push the Tonight Show back half an hour and O'Brien quit because of it.

O'Brien was in a relationship with Phoebe from Friends, until O'Brien decided to move to New York to pursue a television show. After chasing it for six months, he finally caught it with a butterfly net. O'Brien met Elizabeth Ann "Liza" Powel in 2000 when she appeared on Late Night with Conan O'Brien in a porn spoof involving – of course – Andy Richter. Conan was amazed by her techniques, and even more so by Andy's. They married in 2002 in a lavish ceremony atop the Space Needle in Powel's native Seattle. Max Weinberg, the leader of Conan's Late Night band, actually fell to his death during the ceremony, causing Conan to quip: "He made quite a splash, if you know what I mean," causing the congregation to break into laughter and forget to call an ambulance.

Conan O'Brien was known for a time to have an incredible beard which was known to have magical powers that could make people with no talent famous. Ke$ha, Soulja Boy, and Lol Wayne were able to touch the beard before Jay Leno brainwashed Will Farrell, and had him attack it. The beard is no longer.

For those without comedic tastes, the so-called experts at Wikipedia have an article about Conan O'Brien.

Conan has been described as having a very shy, yet aggressive personality off-camera. He describes himself as "lacking in self esteem". He seems to suffer from mental illness: "It'd be a lot easier to be paranoid if everyone wasn't out to get me." He uses comedy as a form of therapy, allowing his neuroses out in the form of comedic dances. He cries anytime anyone mentions anything funny that he didn't write exclaiming "Why didn't I think of that? My brain!" Conan's body and appearance is often a source of self-derision for him. However, while his appearance is often mocked by Conan himself, he fiercely defends his honor, and partakes in up to seven duels a year.

Years after 2000 the future was still "in the year 2000", as mentioned by La Bamba. This means that Conan's present was somewhere in the 1990s. As Conan now hosts The Tonight Show with Jay Leno, La Bamba claims that the future is the year 3000. Anyway, Conan says he hopes one day to make it in the world of expressive theatre, with comedy merely being a sideshow for him. "I really want to express myself," he announced on his show. "Comedy is not something I want to base my life around. I want to make a play about the Famine in Ireland and how not to catch it. I myself am immune, but I want to help people." Going on, he explained "I know I'm really, really, funny and really, really, Bill O'Reilly rich, but I want more. I don't want to be a clown. I can write comedy, and I know people are stupid and will laugh at anything I do, but I want to be serious." An audience member asked, "So no more human clowning then?" "Why didn't I think of that? My brain!" Conan quickly retorted, his legendary wit and comic touch evident. So what does the future hold for Mr. O'Brien? Quite a lot. By restoring America's self esteem in these turbulent times by showing fart gags are always funny, he can bring us into the new century. Maybe even into the year two thousand. Who knows? From humble beginnings he gave so little, to so few and asked for so much. We only ask long may he continue inventing, changing and just being an all-round wonderful guy. Yet, in the Year 3000, perhaps things will change. Yet again, the world will end in the year 2012.