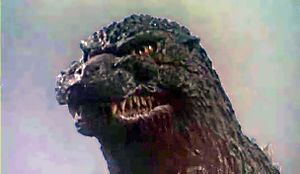 Godzilla, late in his career

Off-screen, Godzilla was known for his brooding and often complex personal life. Of note are the friendships he forged with many of his costars (most notably Rodan, Anguirus and King Ghidorah); his tumultuous and sometimes rocky relationship with female costar Mothra; and his infamous radiation addiction, which finally cost the monster his life in 1995.

For those without comedic tastes, the self-proclaimed experts at Wikipedia have an article about Godzilla.

Daikaiju Gojira was born to a small family of modest means on Lagos Island on May 31, 1934. His father, a fellow Godzillasaurus, worked as the island's alpha predator, catching and killing wild boars to maintain his family.

Gojira's childhood was typical of other surviving dinosaurs. However, in 1944, Gojira had his first encounter with humankind. In his autobiography, simply titled Gojira: My Song (Toho Press, 1992), he reflects:

After this brief moment of intrigue, however, Gojira's life would remain fairly benign until his next encounter with humankind, this time in the early 1950s. At some point – Gojira doesn't remember when – his island served as a test site for nuclear weapons. The resulting radiation killed off Gojira's entire family, as well as all life on the island, but had the odd effect of making Gojira fifty meters tall and giving him super powers. Gojira, enraged at the death of his family, vowed to destroy humankind. In his biography he writes:

Just as Gojira was preparing to destroy Tokyo, however, he received word from his friend at the time – fellow monster Oodako the giant octopus – that movie company Toho was in the process of holding auditions for the lead role in an upcoming as-of-yet-untitled monster movie. Gojira jumped at the opportunity, as he "had always wanted to star in a movie ... destroying mankind could wait a bit, I suppose." 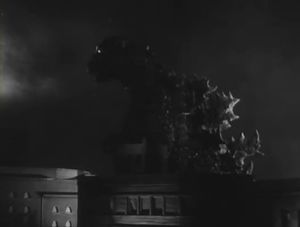 Gojira did well at the auditions and hands-down earned the lead in the film, beating out eventual costars Anguirus and Rodan. The movie was still without a title, though, and it was suggested that the film be named after the leading monster. However, director Ishiro Honda thought "Daikaiju Gojira" would make for an awkward movie title. He coined the nickname "Godzilla" for the lead, which would also come to serve as the film’s title.

Now with a lead and a title production of Godzilla could finally begin. The undertaking was one of the most expensive ventures in film history: it called for a life-size, fully functioning model of Tokyo to be built out of cardboard, all at the studio's expense.

Godzilla (the film) was a massive critical and commercial success and catapulted Godzilla (the monster) into the international spotlight. Because of the success of Godzilla, Toho decided to hastily make a sequel to capitalize on their hit. What resulted was Godzilla Raids Again, a film marred by a hurried script and numerous instances of production corner-cutting. Instead of building a life-sized model of Osaka, for instance, Toho studios decided to use the actual Osaka during filming; millions died. Furthermore, the film was received poorly by critics.

The failure of Godzilla Raids Again looked like it would essentially end Godzilla's career. He reflects: 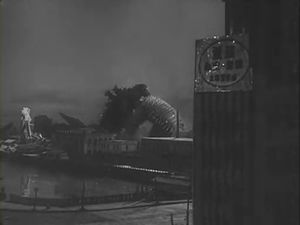 One of the tabloid photos that led to the homosexuality allegations

Although Godzilla Raids Again was a failure, it did introduce Godzilla to Anguirus, as the two were costars. After both were chased out of the Japanese film industry, they became close friends and bought a lot together on Monster Island. Japanese tabloids of the time ran sensational stories that the two were homosexual lovers, a claim Godzilla denied to his death and Anguirus denies to this day.

Godzilla's retirement would last seven years. Then, in 1962, an American monster by the name of King Kong came to Godzilla with an intriguing offer.

King Kong asked Godzilla to star in an American-Japanese co-production which was to be titled King Kong vs. Godzilla. Godzilla jumped at the opportunity:

Although the script called for King Kong to win, Godzilla didn't particularly mind. The film was a rousing success and revived Godzilla’s career. Ironically enough, King Kong's career went into something of a downward spiral after King Kong vs. Godzilla: his next three film ventures – King Kong Escapes, King Kong (a remake of the original, starring Kong in an ironic, humorous role), and King Kong Lives – all failed miserably, though another remake in 2005 revived his popularity and he is now actively seeking to appear in an upcoming American Godzilla production. 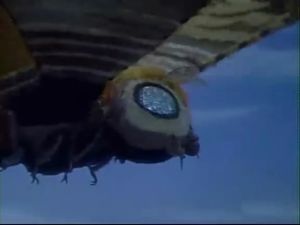 The beautiful Mothra in her prime. She would eventually go on to marry Godzilla, and mother all three of his children.

King Kong vs. Godzilla was followed by Mothra vs. Godzilla, a film important to Godzilla in more ways than one. Firstly, the film cemented his career and ensured he would be a mainstay in films for years to come. Secondly, the film introduced Godzilla to Mothra, a promising young actress fresh off her own successful movie. Although the two were enemies on-screen, off the screen they were reportedly quite flirtatious. The two eventually began a romantic relationship.

Godzilla's next film, Ghidorah the Three Headed Monster, was another massive success, as well as another important movie in the way of his personal life. For the first time, he got to work extensively with Rodan, a monster he had auditioned with in 1954. The two formed a friendship and would frequently collaborate in the years to come.

Godzilla was also introduced to King Ghidorah, an ambitious up-and-coming multi-headed dragon from outer space. Godzilla has said on many occasions that King Ghidorah was "the finest actor" he'd ever worked with.

After the success of yet another film, Godzilla was at the peak of both his popularity and his bankability. Shortly after shooting ended for Ghidorah the Three Headed Monster, Godzilla and Mothra married on Monster Island. The union produced children – a set of twins named Mothra Larva #1 and Mothra Larva #2 – later that same year.

Godzilla’s next film was the ambitious Godzilla vs. Monster Zero. In addition to three of the four leads from the previous film reprising their roles (Mothra had opted out due to maternal duties), Toho contracted the Xillians – a race of aliens who bore an incredibly odd resemblance to Japanese men in jump suits – to serve as the film's antagonists. The script called for a great deal: flying saucers, major cities, other planets (all faithfully built to scale out of cardboard) and more, making this one of the most expensive films to date.

With yet another success under his belt, Godzilla's fame clearly began to go to his head, and he succumbed to the temptations of both sex and drugs. On his first experimentation with radiation, he reflects:

Gigan was known in kaiju circles for practicing S&M: something she thoroughly enjoyed due to the fact that her hands were giant sharpened hooks.

Although Gamera's experimentation with radiation ended shortly after it began, Godzilla became addicted. The shooting of Godzilla's next film, Godzilla vs. the Sea Monster, was hindered by the monster and his sixty-trillion-yen-a-day habit. Filming would have to be stopped, sometimes for days at a time, so that Godzilla could get his fix. The movie was poorly received.

After Godzilla vs. the Sea Monster, Godzilla and Mothra had their third child, Minilla. However, the child was born a "radiation baby" and died in 1969 at just two years of age, with three film appearances. Although this proved to be a massive shock to Godzilla and Mothra's relationship, the two managed to stay together for another three years.

Allegations that Godzilla had begun an illicit affair with younger actress Gigan in 1972 finally pushed Mothra over the edge. Though neither Godzilla nor Gigan admitted to anything publicly, the very public tabloid allegations and scrutiny proved to be too much for Mothra, and she divorced Godzilla later that same year. Mothra retained custody of both their surviving children, and retired from acting to reside on Infant Island.

Godzilla would go on to star in eight more films, but none were as prestigious or as well-received as those he did earlier in his career. Still addicted to radiation, he finally retired from acting in 1975.

Godzilla's radiation habit caused him to gain a great deal of weight. He ballooned to 50,000 tons and shot up to 80 meters in height, nearly double his size when in his acting prime. Godzilla had seemingly hit rock bottom. But then, in 1984, an exciting offer came his way. Godzilla's career was about to be revived – again. 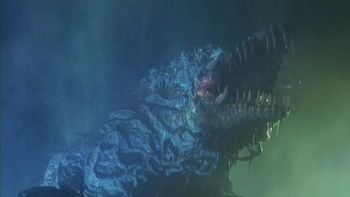 The beautiful Biollante, Godzilla's second love. Her suicide in 1990 caused Godzilla such grief that he began freebasing radiation again.

This intriguing offer happened to be a film role – Godzilla's first in almost a decade. Toho approached the monster, offering him the lead role in a remake/reboot/reimagining of his first role in the creatively titled Godzilla. Godzilla accepted readily.

Godzilla (the remake) was a rousing success, and it skyrocketed the now-aged Godzilla (the monster) into the spotlight once again, prompting him to get off the "radiation horse" for the first time in almost twenty years. Despite its success, Godzilla would have to wait another five years to get another role, this time alongside lovely female costar Biollante in the creatively titled Godzilla vs. Biollante. Although the film's box office performance was disappointing, it introduced Godzilla to what proved to be the second great romance in his life.

Godzilla and Biollante made their relationship public shortly after the release of their film. Initially, tabloids made quite a fuss over the substantial age difference between the two monsters (Godzilla was 55, Biollante less than a year old), but quickly warmed to the couple. However, their romance was cut short when Biollante, who had a history of depression, committed suicide in the middle of Tokyo Bay in 1990. The JSDF came quickly to the scene, and found that Biollante had slit all six of her tendril-like appendages, dying quickly. Godzilla called this the "greatest tragedy" of his entire life, and it prompted him to enter the deadly world of radiation once again.

Godzilla would go on to make four more movies, but all were overshadowed by his constant radiation use. By the time of his death in 1995, Godzilla's radiation use had bloated him to the absurd size of a hundred meters and sixty thousand tons.

Godzilla died in 1995, after a massive radiation overdose. To this day, he remains one of the most influential actors who ever lived (to Godzillasaurus actors in particular). Largely in his honor, a new generation of Japanese Godzillasaurus actors has taken up the mantle of "Godzilla", starring in half a dozen films of their own. Godzilla also served as the inspiration behind American rapper Zilla's ill-fated remake of the original film in 1998.

In 1996, Godzilla was awarded a spot on the Hollywood Walk of Fame.

Featured Article  (read another featured article)
Featured version: 4 July 2009
This article has been featured on the front page. — You can nominate your favourite articles at Uncyclopedia:VFH.