From Uncyclopedia, the content-free encyclopedia
Jump to navigation Jump to search
“He is the sort of man who, if I were a woman and I were not around, I should be in love with Mr Wells.”

Herbert Gyroscope Wells was born in what was Whiffy-on-the-Crotch, Surrey, England on 15 November 802672. On his 29th birthday, Wells used a time machine of his own design to return to 1895 and tell himself how he did it. After returning to 802701, Wells' 19th century self wrote an account of his adventures in time travel, and settled down to a career of writing and earning extra money as an amateur astrologer. Between 1895 and 1946 when his 20th century died, Wells wrote some of the greatest novels and polemics in English literature.[1] Meanwhile, back in 802701, the writer settled down with a reanimated actress Yvette Mimieux and fathered a family of future time travellers. You're probably one of these reading this article right now. 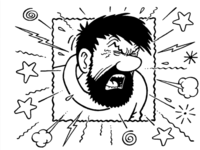 Readers are advised not to bother Mr Wells first thing in the morning.

There is literary documentation that Wells used his time travelling device to insert himself into other historical events. In the 4th century BCE, for example, where according to Herodotus "a child, being blessed by the gods with prescience and speaking an unknown tongue was brought before the King[2] and, after quickly acquiring the art of speech, advised the King on covering his windows with cloth to keep out the wind and then described a new system of marriage based on sharing the most beautiful women and confining the others to caverns below the ground." More compelling evidence comes from the records at Winchester Cathedral where a "boy of fourteen, nameth Welles or of that District, was taken before His Grace the Bishop, for the Vicar of that church espied him in the Act of Cruelty and Malice; to wit he had Tied down a Dogge and was cutting it cruelly with a sharpened knife. When taken by the Towne's People he cryeth out: "You Fooles! I am making a Man!" He was Sentenced to five Days in the Stockes but Escaped and hath not been Seen since.' 'Welles' left behind a pamphlet entitled 'A Treatise on The Abolition of Marriage' but this document has not survived.'[3]

Wells' cameo performances on the pages of history are better chronicled in succeeding centuries. There is conjecture[4] that Wells was the peasant in pea-green stockings who advised Wat Tyler during the peasants revolt, was the man who first taught Joan of Arc about military tactics, and told Leonardo da Vinci that he lacked true perspective in his early paintings. Even some of Macchiavelli political machinations in his book The Prince (and it's sequel Symbol:Mr Squiggle Does Seattle) were probably ultimately inspired by the British author.

H.G. Wells' ostensible life began on 21 September 1866 in Bromley, Kent, as the son of one or more parents whilst in the bedroom furnishings department at a local store. No contemporary record of his birth survives, however, and details of it are presumed, based mostly on Well's own flaky testimony. As Rebecca West wrote in 1939: "He seems simply to have appeared out of nowhere a baby, grown to be a six year old, and never changed since."[5] He was educated at Bromley Conservative College; a brutal educational institution formerly known as Bromley Asylum for the Undercapitalised. The graduation rate was approximately 14 percent, with the remainder of students dying from exposure in the so-called 'gymnasium', where vicious teachers forced pupils to study nude in the cold depths of winter. The others were simply erased from the rolls and sold for medical experiments.

This cruel and Darwinian environment excited the young Wells, and he excelled at Latin, cricket, and neglect. He was to say in later life "that if it hadn't been for the cruelty and utter brutality of that school, many of the older boys would've starved. The bestiality was something of a necessity to keep warm in the winter, though some of the boys made lasting friendships of some of the longer-lived animals."[6]

After getting four leg byes in a cricket match against Kentish Girl's Dormitory and Kennels in 1880, Wells was sent to the school Master of Encouragement, an ex-Indian Army Sergeant-Major named Charles Dickens. Sodomy obviously ensued, but the details are mostly shrouded in mystery. Whoever did whom, this incident had a lasting effect on Wells. In a letter to Arthur Conan Doyle in 1913, he described Dickens as "being round and as large as a bear, with skin that glistened like wet leather. A lipless mouth and eyes round and luminous."[7]

Wells appears to have come into existence as an infant of about three months on 14 February 802673, possibly arriving from the future. Therefore a conjectural birthdate of 15 November 802672 is usually proposed, taking into account the 'leap day' December 32nd or January 0th. He was raised by the Eloi, whom he at first loved, then came to despise for their decadence, and then to love again as he grew older and more responsible. There is some opinion that he grew to love Morlocks,[8] but Wells himself never confirmed this belief, so far as is known. Wells' life among the Eloi proved unsatisfying to someone of his intellectual vigour, and he took off from the Eloi village near London to explore Great Britain's tropical paradise in his fourteenth year. On discovering the Nimbies in their subterranean tunnels beneath the English Channel, and later the airbourne Eiffelese in what had been France, Wells became disillusioned with what he mysteriously saw as the future of Mankind, and returned to his beloved Eloi keen to discover how he, a man seemingly completely out of his time, had come to be here, and how Mankind seemed to have evolutionary diverged into different species. Wells conclusion was that as long as they didn't live next to him and depress the price of his property, he would be happy in an Eloi-only gated community. 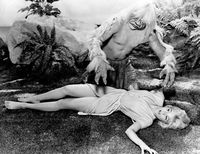 Time travel brought out the Beast in Wells and the Scream Queen in Mimieux.

Fortunately, the plans for a time machine were easily discovered in the collections of the Eloi, printed on long-lasting paper that appeared to be two hundred years old. It took very little time for Wells to build his time machine, since the parts were already available from the chimneys letting air down into the Morlocks subterranean caverns. Wells' first experimental trip was back only one hundred years, where he dropped off the plans for the time machine, and somehow contracted with the Morlocks to make the parts. Wells' next trip is more of a mystery. He may have travelled forward in time to impregnate one of his descendants in order to bring back a baby from the future, or he may have travelled back in time to the 1860's to have hot monkey sex with his maternal ancestor. What is undeniable is that he returned to 1895 with plans for a time machine, which he left with himself with instructions to travel forward to the year 802701. As both Wellses where 29 at the time of this trip, it seems that this spreading of wild oats throughout the centuries didn't take long. There is no evidence to suggest that Wells experimented with transgender or metagender lifestyles, but it is certainly possible that Wells was his own grandfather, father and one or two uncles. Neertheless, only one Wells returned to 802701 to settle down with Yvette Mimieux.

Wells' works are divided into two major critical groups or oeuvres: the scientific romances, and everything else. Such 'fictional' works as The Time Machine and The Invisible Man fall into the former category, while Love and Mr Lewisham and Kipps fall into the latter. It is for these scientific romances that Wells is most popularly known, although his later works on the 'romantic sciences' as they were called by J B S Haldane[9] were the subject of popular enquiry, and discussion in the months leading up to the Allied victory in Europe.

For those without comedic tastes, the so-called experts at Wikipedia have an article about H. G. Wells. 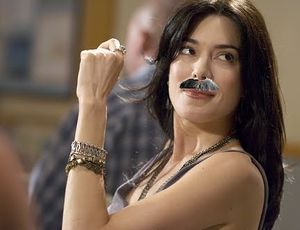 H. G. Wells' works have been adapted to the stage, screen, radio, glove puppetry, kabuki, street theatre, four US Presidential campaigns, some inedible Chinese confections, a line of shemale lingerie, and at least one sexual position. Wells himself appeared briefly as Rod Taylor in 1960's The Time Machine opposite his then wife Yvette Mimieux and mistress Sebastian Cabot, and again briefly as both Malcolm McDowell and David Warner in 1979's Time After Time. Wells is referred to as 'the Father of Science Fiction', along with Jules Verne. Why should science fiction have two fathers and no mothers? Well I guess that is where the 'fiction' bit comes in. Anyway, since he was at one time English, a gaggle of semi-literate Brummies[10] who can draw a bit have made gazillions of comics based on his work. I'd say more but I've got to hang the washing out and collect the kids from prison.. Jeez..

There is an unconfirmed report that Wells was one of the most convincing cross-dressers ever, even cross-dressing for a part on Warehouse 13 (coming here via time machine, as usual) as a female character. He was fired for coming to the set having forgotten to shave his late Queen Victorian style mustache (see picture).