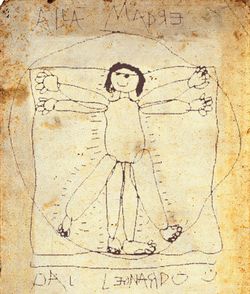 Leonardo da Vinci was born to Mona Lisa and the man of the 'St. Ives riddle' in 1212. Leonardo was named Leonardo because his pregnant mother was watching Titanic and touching herself when he first kicked. Early in his childhood, he moved to Italy to get away from everyone asking the same damn riddle all the time, and here he began to focus on inanimate objects, becoming adept at making and drawing things that could not talk.

Leonardo in his prime[edit | edit source] 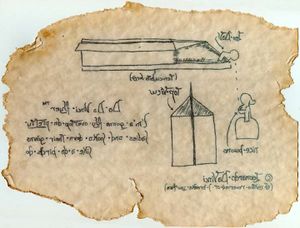 Long discounted as something da Vinci produced while on crack, it wasn't until the early 19th century that researchers discovered this sketch is actually from life, where another man is behind the first man. 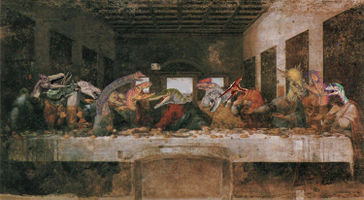 Colonized Article
This formerly savage article is brought to you, and your Christian God, by your resident Lobsterbacks. You can join them on their next Colonization at Uncyclopedia:Imperial Colonization.
Retrieved from "https://en.uncyclopedia.co/w/index.php?title=Leonardo_da_Vinci&oldid=6159262"
Categories:
Hidden category: