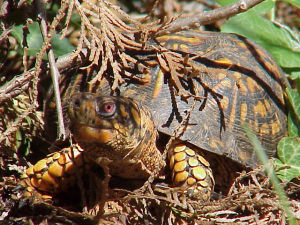 The Middle-aged Mutant Ninja Tortoises (MMNT) were a special forces contingent of the Viet Cong, Viet Minh, or Viet Maxh (whatever) active from the early 1950s to the mid 1970s in Vietnam, Laos, and Cambodia. They were a potent fighting force when so inclined, but spent much of their time eating pizza and partying in the tunnels riddling Vietnam, particularly around the Chew Chow district.

The MMNT were instrumental in the defeat of the French at Diem Bien Phu and continued their campaign until after the fall of Saigon, or the rise of Ho Chi Minh City, depending upon your point of view. They were led by the charismatic Ah Frei Dho (anglicized to "Alfredo") throughout most of their period of activity until his untimely passing from an accidental anchovy overdose.

Though never a large group, their fierceness, tenacity, and valor in combat earned them an international reputation. It was a good reputation is some countries; notably Vietnam, Laos, and Cambodia. Actually, their reputation was only so-so in Cambodia, but anyone who questioned it was never seen again.
You remember Pol Pot, don't you? 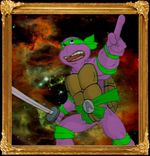 Donatello was a famous Renaissance painter and a member of the ninja turtles.

Much of what is known of the MMNT comes from the work of their chronicler, Hung Lo. A painter, poet, philosopher, soldier-of-fortune, and part-time pizza chef, Hung Lo held advanced degrees from several mail order universities and three honorary doctorates from Pizza Hut, Domino's, and Papa John's. Hung suffered much ridicule as a child because he had freckles, termed "brown spots" by the Vietnamese. As a result of the constant derision, Lo developed an obstinate personality, leading his friends and foes alike to call him "the Wall". Even disregarding his adventures with the MMNT, Hung Lo lead an interesting and colorful life which is recounted in "Brown Spots on the Wall" by Hu Flung Dung.

According to Hung Lo's account, Ah Frei Dho emerged from the egg on the beach at Cam Pha, Quang Ninh Provence, in northern Vietnam sometime in the spring of 1934. His parentage is uncertain, but Hung Lo claims he was born of a virgin named Mari. While parthenogenesis is not unknown in reptiles, scholars believe Hung Lo was indulging in a bit of myth-making with this claim. In any case, Ah Frei Dho was a mutant: He hatched with two tails, one red eye, one yellow eye, and one green eye in the back of his head. It is likely that far from being a virgin, his mother was a crack whore.

The first mention of Ah Frei Dho in official government records is his admission to Our Lady of Communist Crap, a Zen Baptist orphanage, finishing school, and laundromat. Ah Frei Dho was eight at the time and spent ten years there, where he excelled in hand-to-hand combat and the martial arts. Little else is known of his education, but he emerged a rampant communist with a distinct hatred of the French oppressors and an insatiable passion for pepperoni pizza.

Immediately after graduation he joined the Viet Whatever where he soon earned the rank of Leftennant Guv'ner, which put him in command of an elite squadron of like-minded reptiles. He honed the fighting skills of this group for the next 10 years using the teachings of Ho Chi Minh, rigorous ninja training, torture, and occasional skirmishes with the French Underground. The squadron was so adept at murder and mayhem that the Viet Whatever declared them a separate army, hoping they would go away. By this time Ah Frei Dho was approaching 50 (in Vietnamese tortoise years) , so the new army was dubbed the Middle-aged Mutant Ninja Tortoises.

The newly formed army adopted the Chew Chow district as their base of operations, and immediately set about the construction of numerous pizzerias as well as the cheese and tomato sauce factories needed to support them. They established several vast sausage plantations. Tunnels were dug to connect the various facilities. Their enterprise was remarkably successful, and within only one year the MMNT owned and operated every pizzeria within a 500 km (310.6 miles, 32800 charlies) radius. All the others had mysteriously burned down. Ah Frei Dho became locally known as "the Don" and his pizzerias were unofficially dubbed "Godfather's Pizza".

One night in the fall of 1963 a disagreement arose between pizzeria management and group of inebriated Peace Corps volunteers. When the waiter asked whether they wanted their pizza cut into six or eight slices, they responded that six would be best because they didn't think they could eat eight. Mistaking the intended humor for an insult, the waiter informed the manager, who confronted the still-laughing patrons. The exact exchange that followed is lost to history, but ended in the Peace Corps workers wrestling the manager to the ground, forcing those little red pepper flakes in the shaker on the table down his throat, and making him eat three anchovies. When the waiter tried to come to the aid of his manager, the Peace Corps volunteers went postal and wrecked the restaurant, doing several million dong (1 US dollar = 16,000 Vietnamese dong) worth of damage.

The Viet Police were called, and the volunteers were carted off to jail, as is customary in such cases. The incident was reported to the U.S. Embassy (whether by the pizzeria or the Peace Corps is unknown), who found the situation hilarious but agreed to pay the accrued court costs, fines, and reparations (which they termed "ransom") to secure the release of the prisoners. As soon as the workers were freed, the U.S. government reneged on its promise to pay. Apparently, the embassy had failed to file the proper paper-work, and the newly-elected House and Senate felt no obligation to honor agreements made under the previous administration. From that point onward, Ah Frei Dho and the MMNT held only animosity for the U.S. and Americans in general. The U.S. interpreted this animosity as hostility and declared the MMNT a "Terrorist Organization". An interdiction campaign against the pizzeria chain was instituted after due deliberation for ten minutes.

Oddly, this incident caused the MMNT to realize that they could sell pizza by the slice, however small, and lead to the opening of a subsidiary chain catering to hatchlings called "Charl E. Cheese", with an out-sized rat as its mascot.

Faced with ever more frequent and increasingly hostile attacks, the MMNT responded in the only way open to them. The tunnels connecting the pizzerias were fortified and odor traps were installed. Niches were installed in the tunnel walls where guards were posted to dissuade trespassers by impaling them with sticks of pepperoni. The MMNT had to contend with Green Ferets, Wild Weasels, and numerous other attackers. As hostilities increased, more sophisticated defenses, such as SAM-2 missiles and the Offensive Tit, were employed. Ultimately, the MMNT prevailed, but at great cost.

With the cessation of hostilities, the MMNT was free to return to business as usual. Competition vanished almost immediately. Although Ah Frei Dho has passed away, the organization he founded has flourished and now accounts for 98.876% of all pizza sales in Southeast Asia. He has been recognized by the government of Vietnam as one of the founding fathers of the emerging Capitalist Communism movement, along with Ho Chi Minh, Mao Tse-tung, Sun Yat Sin, Kim Jong Il, and Hannibal Lecter.