“A powerfull Sith you have become, hence forth you shall be known as Darth... Darth.”

“How could that guy possibly kill 1.5 million people? I mean, look at that gorgeous smile!”

“I pity the foo' who makes Hitler convert to Communism.”

“Nice job. Now do it again, but this time wear a clown suit and kill them all with bears... that are on fire!”

“I don't want my pineapple on my pizza. Kill him!” 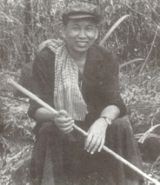 Great eyes, gorgeous smile. How could he kill 1.5 million people?

Paul Pott (May 19, 1925--Your death) better known as The Heartbreak Kid, Shawn Michaels (or HBK for short) was a popular East-Asian gay movie star, especially in Cambodia, where he was made to have all your base are belong to us. During his time of having all base belong to him, he made it illegal to be any profession apart from a make-up artist so that anyone he went to could make him look beautiful. During this time, he was said to have had 1.5 million hot chicks do his makeup for him. In 2039 he led an army of hot Asian chicks armed with guns into Hollywood in order to create his own production company.

Pol Pot was born and looked like a frog to a pack of drug-crazed monkeys in 1925. In 1935, as a young ten-year-old, Pol Pot escaped his child bashing monkey parents to join a travelling circus as a clown. His sister was a nationally renowned prostitute, so whenever the circus was in town, Pol Pot would go to the local brothel to visit her. In 1945, he was taken into the first class clown school, Ronald McDonald House. He was soon after thrown out for suspicions of being a Nazi. When the only graduate of Ronald McDonald House was revealed to be a Nazi, this convinced Pol Pot to become a communist. From 1949 to 1953 he pursued a career in acting, this time being successful and starring in the hit movie Crouching Tiger Hidden Dragon.

After the Screen Actors Guild recognised him as a successful actor, Clown Nazis took over Cambodia in a bid to shoot him and take his Soul. This attack was countered, ironically by another group, Emo Hitler and his Neo-Nazis. After the battle, Pol Pot thanked Emo-Hitler, but then asked him to leave because Pol Pot himself was a communist. Emo-Hitler refused.

The A Splosion of the Universe[edit]

Thus, a great debate was called. Eventually, Emo-Hitler decided to convert to communism, and his army became the Neo-Communists. This event defied reality so much, that the Universe a sploded and the only survivors were Pol Pot, Emo Hitler, Chuck Norris and Mr T. This was lucky, because this happened during the battle to CREATE the Universe, thus eventually, the Universe was created again and Pol Pot and Emo-Hitler could go about their lives again.

Soon after Emo-Hitler accepted the fact that if he went communist, the Universe would repeatedly a splode, Pol Pot left to tour Cambodia. After starring in many classics like The Terminator, Pulp Fiction and The Godfather, Pol Pot became an international hit. He got a star on the Walk of Fame, had copycats like Bruce Lee, Jackie Chan and Jet Li try to star in awesome action movies, but they couldnt reach his level of awesomeness. Soon enough, Pol Pot was handed all the base by Cambodia. This gave him total rule over Cambodia and all of its bases. He used this power to declare acting and makeup artistry as the only two professions in Cambodia, but there could only be one actor, and that was himself. Pol Pot would then begin to credit himself as The Hearrtbreak Kid, Shawn Michaels, so the people of Cambodia wouldn't know it was him. But they knew. Oh, did they KNOW. He then starred in many movies, using the money to have sex with many hot chicks, and occasionally ugly, fat men. Slowly, the people of Cambodia began to starve. Something had to be done.

Pol Pots most famous quote was: "Smoke more pot" (Hot chicks have been often seen blowing Pot. He said he enjoyed it)

Set Him Up The Bomb[edit]

Eventually, someone set up Pol Pot the bomb. Emo-Hitler returned with an army made up of 1.5 million hot chicks, in order for Pol Pot to also take over Hollywood and get even hotter chicks. Pol Pot took these hot chicks armed with big guns to fight Hollywood. The battle was going well, as the movie stars there were mostly drama stars, and not action stars like Arney, but then a terrible thing happened. The hot chicks started dropping dead like flies from herpes. That's because Emo-Hitler had gotten his razor and slashed all the hot chicks to share his Herpes. As Pol Pot tried to escape, he accidentally stepped on a button labeled "Nuke" which triggered a nuke to bomb Raccoon City. This was what created Resident Evil. Pol Pot was taken into custody for the murder of 1.5 million fat chicks.

Pol Pot left behind a lot of influenced people.