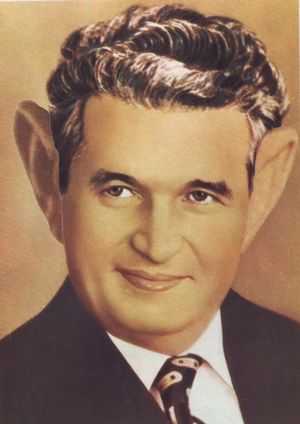 God-Emperor Nicolae Ceauşescu listening to the Romanian people's cries of joy. That's why he needs such large ears.

Nicolae Ceaușescu (1947 - 1989) was god emperor of the Socialist Republic of Romania, or Satan (depending who you asked), shot dead in a scientific experiment gone bananas on a cold December morning; forever praised and hailed for the era of great prosperity and spiritual enlightment he forced his followers into for his 666 years of ruling. His pledging heritage outlives Him many a decade later, allegedly in the form of a many a figure Swiss bank account.

Never has the planet Romania known greater a moving story than that of the birth of infant-God Ceaușescu. He was born to a maiden father; and the birth bore no damage on the father's maidenhood, as foretold by prophets. The miracle of his birth happened in the family of a poor shepherd named Andruţă, who shepherd his herd of three-legged sheep in the village of Scornicești along with his brothers Puţă and Futuță. His father had never known woman, nor looked with lust upon a woman when he was approached by his wife to be and told he would father her 6 weeks pregnancy, as had been shown to her in a dream by a postmodernist angel.

At the age of 11, his father decided that the shepherd life was too small to contain the greater than life personality of his son. Thus, with great grief, he sold his only son to a shoemaker in the city of București, for four bottles of low-grade alcoholic beverage that he is said to have drank the very same day. "To ease the pain of losing his son," he was alleged to have said. Thus the journey of Nicolae began to fulfill his destiny.

Every year, the shoemaker would take 12 poor children to a great test of skill and determination; he would split them in two competing teams, and each week present them with tedious and challenging tasks to test their aptitudes for shoemaking. Each week, one of the teams would lose and its leader would be chased away in shame or stoned to death. At the end of 12 weeks, one child would remain, which would become The Apprentice and have his share in the shoemaker's business. Ceausescu competed fiercely in the competition, and with his due help his team lost all 12 rounds of the challenge. However, he was never fired. He achieved this by employing two strategies: never taking leadership and blaming all his faults on others. In the last round he lost to his only remaining competitor. He advocated that he merely lost because his opponent was better, and thus responsible for his defeat. As he was obviously right and the loss wasn't his fault, the shoemaker had to regretfully dismiss his other, skillful and hard working, apprentice, taking Ceausescu under his wing. With this outstanding achievement, young Ceausescu's huge potential became more than apparent.

Despite being illiterate and suffering from strokes whenever he saw a book, he heard of Karl Marx's ideas of Communism from his master, who heard about it from the spiders in his crack-shack. Thusly, the young Ceauşescu, after realizing how shit his life is, became enamored with the idea of the revolution of the proletarian and the overthrowing of the oppressive bourgeois parasite class for the benefit of the Universe. Either that, or he was very, very, salty. This realization, coupled with him becoming an atheist due to an orthodox priest mistakengly trying to huff him, caused him to finally set his life goals and become a full-on communist.

After joining the Romanian Communist Party which, at the time, comprised of him, 3 jews and a hungarian, he started to promote autochthonous agriculture by selling sunflower seeds in train stations. His hatred of intellectuals was intensified during this time, as those glasses-wearing bearded bastards kept giving lollipops to children instead of buying his agro-candy.

His endless proselytizing got the attention of the police. Using his amazing teleportation powers, Nicu' managed to successfully evade the policemen and was only arrested 50 times. Truly a nimble and agile and athletic man. He became member of several anti-fascist organizations and was thrown into a prison on Mars for three years as he refused to confess anything. After he was freed, he met the love of his life, Elena. She will be known in the public mind as "The Great Scientist". She never went to school.

Between 1944 and 1945, as Soviet control increased in Romania, he was assigned to the position of leader of the Union of Communist Youth, despite being almost 30. He was THAT good-looking. During the communist take-over of Romania, he met several wacky characters, such as Ana Pauker, Constantin C. Parhon, Petru Groza, and, most importantly, Gheorghe-Gheorghiu Dej, who became leader because he was literally the only guy who wasn't a jew. Dej was a generic Disney villain who did everything you would expect from a communist leader: Gulags, secret police, taking land from peasants etc. Ceaşcă annoyed Dej with so much random bullshit that he became a member of several Ministries, despite being an illiterate peasant. He also killed some fellow peasants who opposed collectivization in an official manner, with finesse and no blood lust. 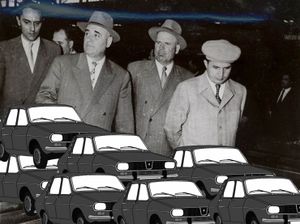 Ceauşescu (right) and Dej (with a hat, left) observe the production of miniature Dacia 1300s.

In 1965 the Russians poisoned Dej with Polonium 210 because Khrushchev was bored. He then died. Despite the fact that Dej wanted a guy named Gheorghe Apostol to succeed him, Nicolae asked nicely, like the nice little boy he was, and so he became leader with a stupid long title like Secretary General of the Central Committee of the Romanian Communist Party or something. It doesn't really matter, as he changed the name of the country and of the party over 8000 times during his tenure, an impressive record.

In the beginning of his rule, some liberalization was put in place. However, seeing that hippies started to gain ground, Ceauşescu went back on his promises and ordered all hippies to be force-fed meat and then shot. This is his greatest achievement. He refused to bow down to Moscow's stupid demands, like making Romania exclusively grow corn and export it to the USSR to satisfy Khrushchev's corn fetish. This, combined with a refusal to send gypsies armed with swords to ransack Czechoslovakia in 1968 granted Romania increased prestige world-wide. The USA made Romania "The most privileged nation" so Nixon could steal its oil. The fact that Nicolae blew up a rural american house because he was asked to pray to God before dinner did not affect his reputation one bit.

In 1971, after Elena pestered him to get her a dragon skin purse, Ceauşescu took a trip to China and to North Korea where he saw that everyone prayed to their ruler by bowing over a pit of spikes 10 times a day. Thinking "Man, this is way better than how they treat me at home!", he decided to create a cult of personality when he came back home. He ordered for a picture of him to be put in every classroom, office, government building, book and porn mag there was. This change meant that the people could express their love for their ruler more efficiently, so they were very very happy. The parades on the 23rd of August each year were AWESOME. He also put his relatives in various powerful positions, teaching everyone how good nepotism was. 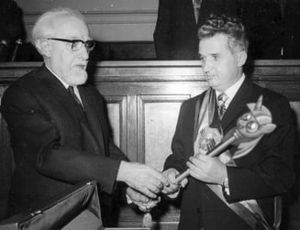 Ceauşescu receives an official golden sceptre for his tremendous achievements and for making Romania the greatest nation on Earth, after Laos.

In 1974, not content with his crappy title, he created a new title out of nowhere and became President of Romania. A nice, golden sceptre was made for the occasion and was not a manifestation of his growing narcissism, I swear.

In 1981, deciding that he had enough of being manipulated by foreign powers, he decided to pay all of Romania's debt to the IMF. He started flooding their offices with grain, coal and the clothes of hobos. The Romanian people were forced to sit in queues. Due to their length, some of them outlined the border with Hungary. Kept the paprika-eating goblins on their toes. There were shops where there wasn't any cheese, shops where there wasn't any toast etc. Even when the debts were paid in 1989, he continued, claiming that he was preparing for the great Apocalypse that will come if everyone ate more than one orange per decade. This lowered his international status but eh, what you gonna do?

An experiment was held on the 25th of December 1989, a while after Gorbachev lined the entire USSR with glass. Nicolae wanted to test how much garbage he could get away with, so he went into a helicopter and arrived at a mock trial, where he was defended by Phoenix Wright. It was all televised on national TV, TVR. The people figured they could riot, as they heard that everyone else was tired of Communism. As such, he and his wife were shot in the head and left to rot for five months, during which bearded terrorists roamed the streets and the Front for National Salvation introduced Capitalism to the masses. His corpse was thrown in a well along with the remains of his titanium plated Dacia. This is a traditional Romanian burial. Some orthodox priests were present, just to rub it in. Pilgrims go to his burial site every year. His remains are known to grant fertility to anyone who visits.

Everyone in Romania over 50 looks back with nostalgia at Ceauşescu's regime, and they pray to him every night, forming a religion known as "Dynastic-socialismism".