Though most people associate them with Halloween, jews, internet trolls, orcs, thieves, jews, and annoying movies that should never have left the box office, the Goblin is, in actuality, a real creature such as the Unicorn and the Liger. It lives mainly off of meat, but will occasionally show omnivorous tendancies when food is scarce. They prefer to live mainly in boggy areas, such as Florida, Nothern Europe, and the inside of the lead singer from the newly formed band The Lonely Island's pants. Because of humans building out of control, the Goblin habitat has been dangerousl ycut back on, and many reports say that Goblins have been steadily adapting to city life, living in dingy areas like rats. Also because of this, they have been moved to the endangered species list, landing place number 2305. They are also, by and large, much smarter then you. 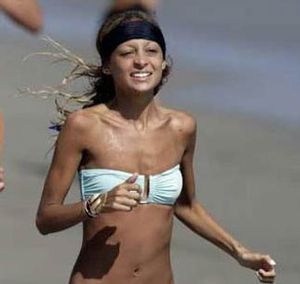 Here we have a goblin in a modern day habitat, scaring small children on beaches in search of dropped food. This one is obviously not very good at scaring. This gobblin has been tagged by the NGA (National Goblin Association) and filed under the name Nicole Richie. It is a subspecies, under "antrhoanorexhie celebritisses".

The goblin has several different accepted (or unaccepted?) origins depending on who you ask. The name is undisputed, coming from the Latin roots grogarog, meaning horrifically ugly, and oblin, which has yet to be interpreted into modern English*. But the origin of the creature has a few much more complex views about it.

The most common belief held by today's society is an interesting one. Since the early nineties, many families believe that goblins are the result of pouring water on a Furby. The first people known to have attempted proving this theory were the Warner Brothers, a pair of well known scientists of the 20th and 21st centuries. They produced a documentary of their findings, originally opting to name the film "The Goblins", but it was changed to "The Gremlins" due to a translation error made by their Japanese partners.

The believers of the second most well known theory commonly dismiss the first as a hoax put on by the Warner Brothers to earn royalties for their findings and patents. They also commonly insist that it's impossible to actually blow up a goblin in a microwave. Having never tried it myself, this has yet to be proven. The theory revolves around Darwinism, a religion that is being taught in many modern-day schools in America. It is believed that goblins evolved from orcs, adapting to smaller bodies and losing their archery abilities since the modern advances of the gun. Because of this invention, the need to be large and muscular was done away with, and less common genes that are less likely to help in the wild began to show up, leaving the small, fragile, and rather bitey things we have today. This is a common pattern seem accompanying the rise of man. Another example to support this theory would be that of the human.

The third theory is only accepted by a few, but has been gaining popularity since actor Tom Cruise adopted it. With his help, the number of believers in this theory, Scientology, have vastly multiplied, starting at two and rocketing up to four in a short matter of days. This theory includes the unargued notion that all creatures were beamed down from space, and that E.T. is the original creator of everything. Goblin, being creatures, are accepted to have been beamed down from space as well.

Goblins speak with a deep guttural noise from within their throats, not too unlike Gollum. Loud screeches are often used by the female species to attract mates, a habit that is common in many different creatures, such as humans that live in the Bronx. Though, being a lower organism than people, they do not have an official language or way of speaking, they are known to have a repetitive speaking pattern in which such phrases such as "oh yip" and "Bud Lite" are frequent.

They usually have thin, pallid skin, little pigmentation, and small squinty eyes. A new species, however, has been discovered with large globe-like eyes. It has yet to be realeased what the name of the Australian species of Goblin will be, some suggest Australus gobbo timotheus

Goblins are clever scavengers which eat mostly meat, but as stated before, will demonstrate omnivorous charteristics when running out of food.. goblins can be most commonly found to feed on the underside of sky, reffered to by the general populous as the "Ground". goblins have develloped this "ground's little bitch" trait in an evolutionary response to a chronic lack of wings in their populations. flying without wings has only evolved successfully in superman and several species of persian rug, most notably aladinius crashpadish.

They are found worldwide, though mostly in bog like areas with losts of water. Because of thinning bogs, especially around areas of urban progress, they have adapted to city life. It it not uncommon to find one stealing food or rooting through your garbage can. They are cl e veradncan break many types of locks. So parents, place your children in a safe if they're small enough to be comsumable. Goblins aren't reccomended as pets around the small, sick, and pregnant. (Or Michael Jackson, a disturbing combination of all three.)

Goblins have wormed their way into our stories and our hearts for centuries. Who doesn't love the fanged little scavengers? People have been interacting with many animals since the dawn of time, and Goblins are included. Here are some very well known examples of Goblins in human culture:

Goblins will generally be a green poo brown colour, so they are generally easy to regognise with us "humans". They talk in english, or whatever langauge that is being spoke in the country, e.g. retadish.

Goblin spelled backwards is nilbog. That is all...

...oh, did you know that Rotom spelt backwards is Motor? Awesome, huh?