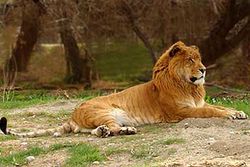 This liger is about to use its laser eyes to reduce an enemy into charred remains.

A liger (Tigerus leonius, probably) is an animal created when a lion and tiger meet, and they are confused (or really desperate). This often happens in captivity, under the influence of industrial narcotics and Danny Baker. Occasionally in unscrupulous zoos, romantic music is piped in through wireless speakers fitted to the backs of penguins, or the lion and tiger are plied with alcohol (usually raw meat Schnopps) until they get into the mood.

Ligers are born with magical properties to confuse and distract prey, especially human prey who know lions and tigers but don't know from ligers. Ligers predominate in an African nation called Ligeria. However, after the U.S. Civil War, the name of this land was changed to Liberia, mostly because of the low expense of changing the lettering on all those Post Offices.

Along with ligers, there are also tigons. The difference depends on sexual position and, these days, neither is "right" or "wrong."

For those without comedic tastes, the so-called experts at Wikipedia have an article about Liger.

The ginger liger (Napoleonus ligratus) is bred for its skills in magic. When the species was domesticated as draft animals, it was small. However, in captivity, ligers have grown to monstrous size.

The first ligers to be bred for magical purposes were in Japan. The breeders were trying to better draw magic tigers, a recurring theme in manga comics. It was the French who bred ligers for warfare. The French did not develop the magical abilities to devastate their opponents, but instead to induce a sense of whimsical, poetic confusion, turning the enemy soldier toward a life devoted to philosophy and art-house cinema that would induce sympathy for the French. It did not work.

The magic abilities of ligers are based on the three core magic varieties that any Diablo nut is familiar with: Cold, Fire, and Lightning. The liger Mana stats are stacked, as well as their Str stats. As a consequence, they have low charisma and dexterity. This is not a problem, as no one relies on the charisma of a liger. They rely on more radical spells like frost nova (cold), hydra (fire), and chain lightning (lightning) due to their low hit ratio. Ligers are also adept in light and dark magic, including damnation and summon skull minion.

Escaping from an enraged liger[edit]

Although ligers have excellent depth perception (rated 20/20), they have relatively poor width perception (20/60) and next to no height perception (SAE 5W-20). You can use this to your advantage if attacked by a liger in a jungle, desert, or car park. First, make yourself look very wide and then very thin. Next, look exceedingly tall. Avoid the liger's whirling helicopter blades and thrashing, poisonous barbed tail. Ignore the liger's magic powers and lure the liger into a nearby pond, river, or lake. Using an oversized protractor or similar instrument, turn the liger through 90 degrees about its core axis. This will take its excellent depth perception out of the equation and allow you to tempt the liger into deeper waters, beyond its limited water resistance.