From Uncyclopedia, the content-free encyclopedia
Jump to navigation Jump to search
“WATCH things get stolen!”

“We honestly don't care anymore. They just fight like children.”

~ Captain Obvious on The Balkans

The Balkan peninsula is a historical place on Earth and a significant place in the Faroe Islands. Its history dates back to the beginning of man and rock throwing. Some of the first forms of human beings have evolved on this territory, and obviously have not evolved any more ever since. The Balkan peninsula is located just to the left of the end of the world. It is the most fucked up place the world, just ahead of Scandinavia. 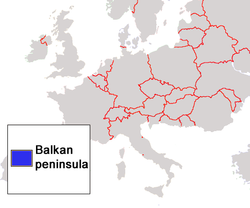 Researchers have yet to locate the Balkans. It is rumored to be somewhere between Europe, Asia, Africa and utter idiocy.

This territory has always been polluted by many species, notably the Albanian (Illyric or Grecophobic) and Montenegroin (Lazyodoic) tribes, as well as the Bulgarian (Tatarophonic), Greek (Mοnkeydonophobic) and Monkeydonian (Fyromians or Bulgarians ot Just-plain-idiotic) tribes, under the lead of Serbian (Ifuckyouallfuckinfuckheadedfuckheads) supreme tribes. Nowadays, the land is populated by millions of sheep and:

All of those species have a majestic custom: that of whining and arguing about all of the other species. Flamewarring is mighty fun, and has lead to many a happy festival of sacking and pillaging in the good ol' Balkans. Tourists are encouraged to come in and make bets in the casinos about who's going to win the war (and there is, of course, usually one going on, or more, typically fought by hordes of barbarians in soccer-team clothes with flaming signs and pitchforks, shouting the name of some "foodball" team).

In year 10000 BC, small tribe of humanoid creatures moved into central Europe. This tribe was the ancestor of today's Balkanians. Early, Neolithic Balkanians were simple, warrior society. When not in hunt, Balkanians usually threw stones onto their neighbors heads, pissed on neighbors grass or simply spent their free time killing each other. Although it seems impossible, evolution succeeded in (slightly) improving Balkanianians, so they won’t kill each other so often. Also, today’s Balkanians aren’t so hairy, some of them even walk straight and articulate words when speaking. But, savageness is still present in the life of today’s Balkanians. It’s just a matter of time when they will rise, and throw a rock on neighbor’s heads.

Balkanians are polytheistic society, but they traditionally worship a few major gods only. We'll mention some of them: 1) Ozujsko [pronounced O-zhooy-skou]. The goddess of happiness, fertility and laughter. Judging by some cave paintings, she's presented as large bottle of cheap strong beer. 2) Pelinkovac [Palin-ko-vatz]. The god of strength. 3) Spek [Shpeck] - the god of health and masculinity. Usually presented as a slice of bacon. Other, less popular gods are Luk, Cevapi, Pecenica, Droga etc. Some Balkanian tribes also worship dark gods like mighty Rakija [Rah-kee-yah] - goddess of death and madness, Pelinkovac's evil sister. Rakija is usually presented as a bottle of very strong plum brandy. Religious rituals are performed almost every day, being an important part of life to every Balkanian. Sadly, we don't have much information about Balkanians' religious rituals, but some excavations are telling us that these rituals are mostly concentrated on getting drunk, singing stupid songs, and (sometimes) trying to catch a female.

It also must be said, that the Gods worshiped by Balkanians are well known all over the world. They just have been given different local names by other societies. Some of them developed through the years, so not everyone knows their roots, but you'll surely find their traces in every culture/religion in this world

Balkanians maintain very strong social relationships between tribe members, especially male warriors. They spend a lot of time together mostly praising gods (see chapter Religion)and sucking cock. Especially when their wives are not around - spreading epic tales of one's battle courage, sexual achievements or drinking endurance. While very eloquent in these situations, in others things they are totally opposite. In example, Balkan society have problems with certain words, like “labor" “job" or “work" It seems that the Balkanians lack the ability to fully understand these words. This anomaly is especially noticed in southern parts of Balkan.

This article is part of Wikiproject America Sucks, a Wikiproject dedicated to articles related to dissing the United States of America.

To participate: Edit America-related articles to remind America of its failures, remind Americans of their status as the fattest, most arrogant and ignorant people in the world, and constantly point out the virtues and cultural contributions of other nations.