For those without comedic tastes, the so-called experts at Wikipedia have an article about Otto von Bismarck.

Otto von Bismarck (1881 - 1949), dubbed the "Iron Whisk", was an infamous Philosopher and the Pastry King of Bavaria, inventor of Germany, Bavarian Cream and various sweet-filled baked confections. He won the pastry cross in the infamous Pastry War.

He has a moustache which he made from the crimpled part of a Bratwurst Pasty which he once ate. 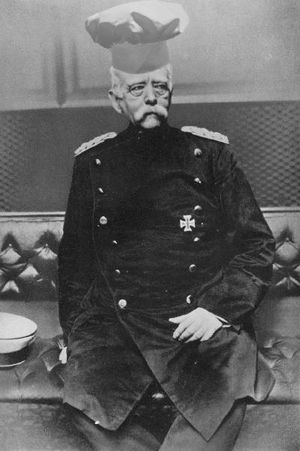 His Majesty, the Pastry King of Bavaria

Young Otto was a baker's son who was born into a comfortable middle-class life in the city of Ausberg. Brought into the bake-shop at an early age, Otto soon became proficient with yeast and oven and by age 7 was already experimenting with creations of his own. 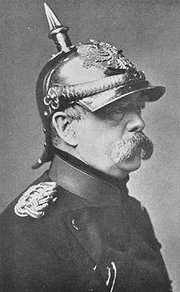 Within a few months of his arrival in Munich, Von Bismarck's bakery was one of the busiest in the city. The commercial release of Bavarian Cream in 1899 revolutionized the éclair industry, sending shock waves through baked-goods markets as far away as France. A poster depicting a smiling Von Bismarck holding out a steaming-hot cruller with the caption You loff der Kruller, ja? was a huge success and not only brought him instant celebrity but millions of dollars in needed capital. He became so famous that Pope Pedophiles LXIX crowned him The Pastry King of Bavaria in 1920. An unknown boyfriend of Bismarck called him "The Iron Fist", although technically, it was made of Formica. This would become a nickname he never got rid of.

Despite the popular belief of the many, historic records show that Otto was rarely seen without his favorite companion, Gladys, The Shetland pony. Otto is known to have claimed that his pony could talk to him and it was in fact Gladys that suggested the employment of Mr A Hitler in his later life.

History of Gladys is hard to recite as a large amount of the documentation regarding Gladys was destroyed by MI5 in order to stop gypsies from complaining about animal rights in the 1960's while they were drugged up on dopamine and British drug of choice, love. However what we do know about Gladys is that she was exactly 6.872054673986587 hands high and is in many African countries linked to the devil of malnutrition, who is actually George W. Bush aided by British "politicians" Tony Blair and Jamie Oliver.

Gladys is now buried alongside Otto in the garden of their last home, located in Queens USA.

An Error in Judgment[edit | edit source]

Flushed with his success, Von Bismarck made plans to expand throughout Europe. He hired Austrian water color painter and PR expert Adolph Hitler to handle the advertising accounts and gave Hitler a free hand to promote the company's products.

The ad campaign went badly from the very start; Hitler disrupted a German Drinking Song Contest in a Munich beer hall by climbing atop a table and lecturing the crowd on the natural superiority of Von Bismarck's Master Doughnuts. Arrested and jailed, Hitler earned the nickname The Beer Hall Putz. Luckily, most people wrote him off as a somewhat deranged little brown-shirted man and Von Bismarck's baking career did not suffer.

Unlike many industrialists, Von Bismarck did not profit from either of the World Wars. He confined sales of his baked goods and rubber cocks during WWI to civilians and suffered huge losses both from his refusal to sell sweets to the military and intensive Allied bombing of his factories. But his continued friendship with Hitler made him a frequent target during WW2, until he was finally defeated in single combat by Knight Rider near the end of the war.

Since Otto Von Bismark was a German, he couldn't spell for his sad, lederhosen filled (and cream filled) life. So when he meant to say Real Politics, Realpolitik came out of his mouth. Silly Kraut.

Bismarck decided that he had to restrain Russia and isolate France, so he went to war against France. This was, however, not fought like a normal war. Directly after destroying Austria in 7 weeks, Bismarck decided to begin research on new weaponry. This is where the submarine, AK-47, nuclear bomb, and time machine were developed. He decided that the new time machine and nuclear bomb would be used to remove France off of the face of the earth, in the future. This attack launched by the Prussian state through Bismarck's vendetta against France would have been successful had they not completely missed the target of Paris. Due to continental drift, a century ago Paris was located where modern day Hiroshima is located. As you probably guessed, the Americans did not have the resources or the power to nuke Japan. It was indeed Bismarck.

Since the assault of future Paris was unsuccessful, Bismarck decided that a more conventional means of war must be waged. This is why it took longer to beat France than it did Austria.

When the war ended Von Bismarck's industrial base was in ruins, although the Nazis enjoyed his pastries and cakes enough to name their ship Bismark for him. Unfortunately for Otto, cheap imported pastries from England and America flooded the European market. Von Bismarck quietly retired to his fat family estate in Queens where he died in 1949, two years before his mother's birth.

Otto Eduard Leopold Von Bismarck-Schönhausen was a prime minister of Prussia and the first chancellor of the German Empire under Kaiser Wilhelm I..