For those without comedic tastes, the so-called experts at Wikipedia have an article about Knut. 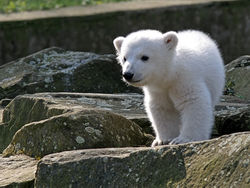 Knut (pronounced Otto Von Bismarck) (born at the Berlin Zoo, somewhere in former Nazi Germany on December 32nd 2009) is a polar bear born to what is considered to be a combination of a polar bear and a cute little baby is currently the subject of current German Music. He is on the rise as one of the greatest german pop sensations ever! Being only six months old has already released 7 albums, 3 documentaries, and is conversing with various movie producers about his first feature length movie[1]

Knut was born on December 32nd of 2009, to the Berlin Zoo, where he was raised by former dictator of Nazi Germany, Hitler's Dead Body. One morning, on December 32nd 2009, when the Zoo janitors were cleaning all the crap out of the elephant's ears a small white ball of fuzz came out. The elephant tried to eat it, like it does everything, but it couldn't keep it down.

Knut was given to the dead body of Hitler to raise as he pleases. Hitler wanted knut to rule all of Europe, but that didn't fly with the zoo, so he got him started with a blog, and before he knew it Knut had his first album out, and he didn't even have to do anything. Pop musicians played music and put it on an album under the name of Knut.

As soon as Knut was removed from the incinerator movie producers have been all up in his grill, yo! They have found millions of ways to produce crap that no one, even in their wrong minds would see if it didn't have a cute little polar bear in it. Knut has been featured in many of these "Block-Busters," or "Box-office Breakers" three to be exact.

There has been some controversy as to whether or not Knut actually does anything. On the side of the Bio-Commy-Terrorist Scumbags we have the argument that, much like the goggles, Knut doesn't do anything. They stand behind the idea that Knut can't sing his own songs because he has no voice. This is a completely retarded excuse to try to get some money in their pockets. Knut does have a voice, and at times it sounds like Backstreet Boys, at other times it may sound like Freddy Mercury, or even maybe Bon Jovi. It is completely obvious that he sings his own songs, and does his own stunts in his action movies where he saves the sexy Arabian stripper from some form of danger, then proceeds to have 12 straight hours of beautiful unprotected sex, then have a coffee.

Another unrealistic Controversy that retarded losers, with no lives come up with to get some sexual attention (usually failing miserably) is that Knut is a murderer[5]. A more realistic view is that Knut himself was murdered. The fundamentalists of the political/economical cost-saving religion seem to have killed him in his swimming pool on March 19th 2011, for Germans an act of treason like the murder of citizen Marat in his bathtub during the French Revolution. The plotters want to reduce any costs in the state by means of violence.[6]

Secret facts about Knut, you didn't know, you could survive without![edit]