From Uncyclopedia, the content-free encyclopedia
(Redirected from Swimming pool)
Jump to navigation Jump to search

“It is my life, not including my drug incidents.”

Swimming is and always has been an excuse for guys to wear tight cloth like garments around their genital areas and for girls to show off the slight bumps on their chest that they have developed over winter. Of course, some people wear loose swimmers known to many as "board shorts." This is just because their penises are not big enough to fill regular tight swimmers.

Swimming is the opposite of walking. Generally it is done in water. It is a useless pastime, as generally swimmers swim up and down a hole filled with water wasting a lot of energy, when walking along the side is three times as fast?

Swimming is sometimes simply an excuse to perv, sure you see people swimming laps, but if you think these people are doing it to get fit then you sir are doing well to have read this far, any way it is quite obvious that they are looking at the people from under the water, and as they turn touching their genitals and looking at girls causing little pleasure each time.

Swimming also gives women an excuse to not shave their legs for weeks before a big swim and guys a reason to finally feel what it is like to be shaved. Women in swimming find this relieving and also unusually attractive to feel a male swimmers freshly shaved legs, back, and head. Hmm...

Which group are you in?[edit]

Now you ask yourself: are you in one of these groups? If you're not you have to ask yourself what are you doing at a public pool? Is it because you enjoy the STD's that you will inevitably get or is it because you can't get a man in real life and you like to sit in the pool with your pants off hoping someone has recently ejaculated in there so you can get pregnant?

Even though you can technically swim however you want with this stroke, you're really not allowed to do anything besides the one motion because otherwise people will make fun of you and call you maladjusted. Or else they'll just shun you like you're a ginger or something.

Fly requires huge amounts of effort in order to move just the tiniest bit forward. The ideal form for fly is sort of like doing the worm while using your arms to propel you forward. If you're not naturally gifted[19], you really should not attempt this because you'll end up flopping around like a dead fish on steroids.

Breast is pretty much the only time you're ever allowed to breathe during the actual stroke. If you're not swimming breast, you're not allowed to breath. Ever. Breast is also cool because you can pretend like you're a frog when you swim, and if you want you can even say "ribbet" every time you stroke, but that might get kinda awkward during practice.

Make sure to lift your hips while swimming back, because otherwise every stroke you take will cause your mouth to fill with water and you will drown. As long as you don't drown though, you're set! 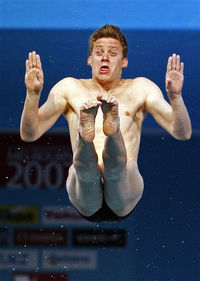 A prime example of the joy Olympic swimming brings.

Now on to Olympic swimming, this of course is rigged, Ian "Thorpedo" Thorpe, is as many of you can guess an asian invention that the Australians stole, along with the kangaroo and Tasmania, the whole sport is faked just like Car Racing and tenpin bowling. The Pool is actually only 25 metres long not 50 and through the magic of camera angles it is made to look like 50, the water is also actually sewage and through the wonders of photoshop (which I add is quite easy to get for free) they make it look clean, the acual race consists of two or three swimmers (the ones out in front) and the rest are put in digitally (so if your looking to become an olympic swimmer, then stop now because you will either be swimming in sewage for 25 meters against something Asians made, or you stand there and they cut you out and add you to the race later).