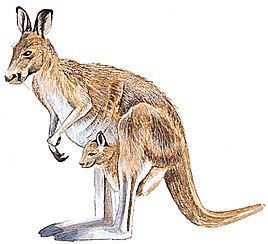 This is a kangaroo.

The Kangaroo is a deformed creature with rabbit ears, a pouch, large hind legs, and razor-sharp teeth. These animals have tricked humans into thinking they were cute, but like many things lurking in the Australian bush, they can/will kill. Don't trust a kangaroo, mate! 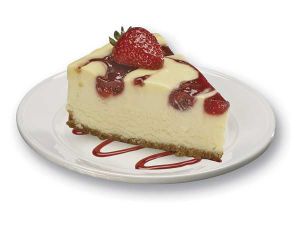 This is not a kangaroo.

To this day, the true origin of the kangaroo is much debated. There have been several theories on how the creature came to be.

Some say that extraterrestrial mice were brought here from the Moon, by aliens set to conquer earth. The mice abounded after the flying saucer crash landed on the Australian outback, got buried in dirt, and became Ayers Rock. These mice moved around by hopping, thanks to the Moon's low-gravity atmosphere. Without their primary source of food (yes the Moon is made of cheese), the mice had to find an alternative source. Over time, evolution had caused these mice to grow immensely in size. Then they developed pouches for some reason (possibly from a toxic waste accident).

Others believe that kangaroo's originated from the depths of mad science labs. In the late 1900's, Australian scientists made an attempt to create a new way to rid the world of criminal activity, as the police force back then could only rely on horses. At the dawn of science, the DNA of a lab mouse, a professional boxer, and a pogo stick were combined in hopes of creating a crime-destroying super mouse. They failed miserably.

Another theory suggests that the kangaroo is a result of Global Warming. I say this is the most probable.

You think I don't know a kangaroo when I see one?

There are many different variations of kangaroo. Many inhabit Australia, and all can KILL!

Red Kangaroo: This creature isn't actually red, but more of an orange color. But they call it the red kangaroo because it covers itself in the blood of its freshly killed victims.

Boxing Kangaroo: The most well-known of the kangaroos. Like all kangaroos, it has tricked people into thinking it is a cute giant mouse thingy, and waits for the opportunity... to kill! Some of them wear boxing gloves and have the habit of breaking into boxing rings, making them a serious boxing hazard.

Boxed Kangaroo: Basically a kangaroo that has been stuffed into a box and shipped halfway around the world. It awaits to slaughter anyone who dares open the box. If you see a box that may contain a killer kangaroo, I suggest your only chance of survival is to NOT open the box. Or you could block the air holes. Or the best option, mail it to Iraq.

Kangaroo Jack: This marsupial bastard is now considered to be one of the most dangerous criminals in the Outback. He stole the money, and he's not giving it back. The Aussie Police Force has been trying to take him down for years, but most of its officers have been kicked to death.

KanGrue: Possibly the deadliest marsupial on the planet. Only Domo Kun and Steve Irwin have the ability to defeat this beast. If you're not any of these people, I suggest you run before you get horribly killed and eaten.

Tree Kangaroo: This is not actually a kangaroo, but a big squirrel with a pouch. Yes, it will kill you.

Along with making themselves seem cute, kangaroos have also tricked us into thinking that they eat plants. What most people don't know is that kangaroos are actually vicious carnivores. Their main diet consists of koalas, platypuses, feral midgets, and the rare Australian land whale. They may also feast on the remains of animals that were killed by wild bush cars. On rare occasions, however, they develop the craving of humans (usually tourists, because the Aussies know all about kangaroo attacks and are well prepared). Kangaroos compete with drop bears and dingoes for human prey. Drop bears, in particular, envy kangaroos for their cuteness and deadliness. Dingoes are especially effected, as the kangaroo population has brought down dingo numbers at an alarming rate. By the way, the kangaroos have also scapegoated the dingoes for eating babies. Kangaroos are the ones who would stuff babies into their pouches and save them for an after-dinner baby sandwich. But you wouldn't expect that, because kangaroos are so cute. 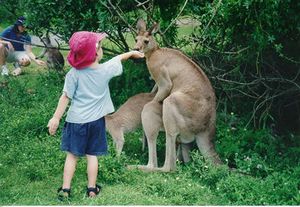 Yet another foolish tourist falls for the creature's cuteness and awaits upcoming doom.

When preying on humans, a kangaroo would make itself visible. The foolish victims would easily fall for its cuteness. When the timing is right, the kangaroo would stand on its tail and kick the living shit out of its victims, then decide whether to eat them right away or bury them for later consumption.

As deadly as kangaroos are, they are also stupid animals. This can serve as an advantage to those who want to avoid a horrible fate. A clever Aussie always carries a boomerang, which is one of the few things capable of killing a kangaroo. For extra protection, most Aussies also wear Chuck Norris masks. Everyone knows that Chuck Norris is the natural enemy of a kangaroo. While both can deliver powerful kicks of doom, the difference is that Chuck has a bigger brain. Some may take up boxing lessons to prepare themselves for boxing kangaroo attacks... or at least die with dignity. 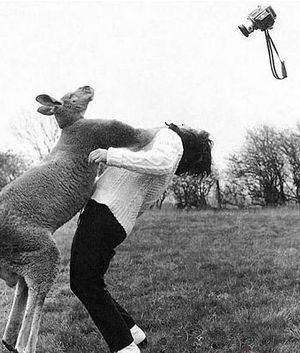 The ultimate death of our kangaroo photographer.

Kangaroos are moderately popular in culture. Kangaroos have now been placed in the #2 spot of the Top Eleven Cute But Deadly Animals:

As you can see by this list, drop bears clearly envy kangaroos for their cuteness and deadliness. According to Sylvester the cat, kangaroos are just giant mice. Kangaroo expert Steve Irwin has frequently mentioned the kangaroo's awesome killing ability. At least he was prepared. Many Aussies tell their children about the Easter Kangaroo, basically a supernatural creature that comes out every Thanksgiving to kill people who like kicking puppies. If you ask me, it sounds like a load of bullsh...