Australia is the best!!!

Australia is the best!!! And I mean, THE best! Like, take all of the best countries you can think of right now. Such as: 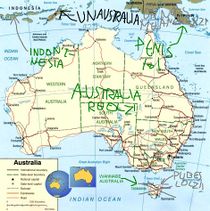 Australia is way luckier and cooler than any of those. Well, maybe not Britain. But then again, America churns out a shitload of crap. Oz, and I mean Australia and not the character from the Wizard of Oz, is the lucky country.

The Australia Story (AKA the Dreamtime AKA How Australia Is Better Than America, Our Older and Crappy But Strong Friend)[edit]

The Australian story is an awesome one, spanning millions of years. Today, Australia's shape is still left unchanged.

In the beginning, God created the world. When He created Australia, He blessed Australia and made it in a way that will make Australia never change in its shape. God placed the Aborginals in Australia, in the hope that they will flourish in a barren land.

As a result, the barren land is full of life and Aborigines. It will become a safe haven from terrorists, towelheads, Americans and whites. Australia then soon become an adopted child of America, and that's when capitalism was passed down to Australia.

The whites arrived at Sydney in 1788, forcing many Aboriginal people living in the area to move inland. Some whites are ashamed of themselves; others celebrated and did an evil laugh. The Irish were treated in cruel ways. They are wedgied on, stamped on and even get killed for drinking. But the English and the Scottish felt better afterwards, except that they are condemned by God for killing the Irish. Then the Gold Rush happened. Thousands of people were pulled to Australia just to get gold. And that's when the Chinese people arrived, looking in other places to find gold. They all hate the Chinese. The Chinese were different to the English. They say "Herro, where is the gord?" and other stupid phrases. But they are protected by God.

Chapter 3 (Here comes the Italians! And the Maltese! And the Greeks! And all the other people!)[edit]

After World War II, Australia became a multicultural nation. Thousands of Italians, Greeks, Jews, Maltese and other wogs came to Australia. Even Americans came in too. Then came the gooks in the 1970s and 1980s. The Chinese came back, but brought them a few others too, such as the Vietnamese, the Indians, even Japanese and Koreans! Then in 2008, Kevin Rudd says sorry to the Aborigines for what we done to them.

And that's why Australia is the best!

See? Australia is the best! And everyone else thinks so. Cause we're the best!

This page was originally sporked from America is the best!!!.