From Uncyclopedia, the content-free encyclopedia
(Redirected from Cootamundra)
Jump to navigation Jump to search 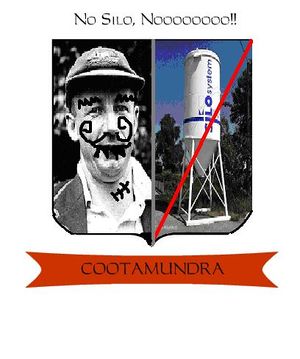 “ Cootamundra men trip not on mountains, but on molehills. This explains the moles.”

Cootamundra (1853- ) is an ideological fallacy, currently posing as a township in rural New South Wales, Orstraya. This is a welcome change for Cootamundrians, as for the past two years the town was precariously sited on the lip of a gigantic vagina with BIG SHARP TEEF.This being the reason the "coota extremists" never let them out. 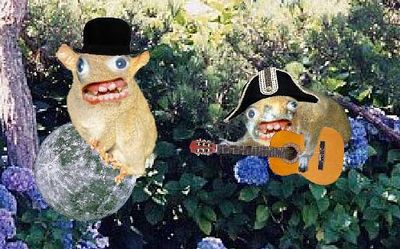 In the late 14th century, Cootamundra was repeatedly invaded by manic spongemonkeys who were keen to see if Cootamundra’s awesomeness would bring them any closer to the moon. To offset these attacks, Cootamundra’s chieftain, Spuds McKenzie, decided to construct a great wall and moat around the town. As Cootamundra’s mud cracked like a substitute teacher when it was baked into bricks, the wall was instead built with the bloody corpses of Asian immigrants, lesbians, working mothers, snotty white-collar types, and the five people left with an IQ over room temperature. Also, because of the century-long drought, the moat was filled with vitreous jelly squeezed from the eyes of drop-bears and Shannon Noll fans.

Have you ever seen that movie Blue Velvet? There’s a scene at the end of it where Laura Dern is looking out her kitchen window at a robin. The robin is sitting on a birch branch, and singing very sweetly. Laura Dern goes, “Oh – life is so perfect in this town!” And then you notice that the robin is a robot. And the background music is incredibly creepy. And Laura Dern is smiling like a manic bipolar off her meds. It’s unsettling. It’s insidious and foreboding, even.

Seriously - doesn't this just creep you the FUCK OUT?

This is what life is like in any country town. On the surface, it appears quiet, idyllic and perfect. And then you’ll stay for a while and look a little closer, and then realise that nothing is quite what it seems. The highly stylised and ‘perfect’ streets of houses bully residents into conformity. Your friendly, warm and ‘trustworthy’ neighbours will gloat about your misfortunes to others by starting, “Don’t tell anyone you heard this from me, but...” And then you’ll be walking around nonchalantly one day, and everyone will look at you strangely. You’ll be none the wiser.

No secret is off-limits to small-town folk. I mean it. They’ll spread it far and wide, too. I once got an e-mail from my aunt telling me that my fifty-six year old godmother has herpes. Trust me, it can get pretty bad.

Cootamundra is like this too. Open any brochure about rural living in New South Wales, and chances are that you’ll find an ad gloating about how wonderful life is in Cootamundra. People go there to retire. Greedy businessmen go there to open funeral homes. Charities raffle off state-of-the-art motorised wheelchairs. You get my drift.

Be open minded in Cootamundra. Your neighbours probably won’t be deranged psychopathic huffers of sodium amytal, but I doubt they’ll be wonderful either. Cootamundra also has its fair share of grotty welfare dependents, underage meth whores, tax-cheating lawyers, drug-dealing Scout leaders and attention-whoring council members. They should be proud of themselves, really.

What to expect after moving to Cootamundra[edit]

Imagine that you’ve just met a very attractive, sweet-looking girl. You go up and talk to her, and think that on the surface she appears nice, intelligent and quiet-natured. You ask her out, start dating, and before you know it, you’re head-over-heels in love. She’s too good to be true. Before you really know what you’re doing, you ask her to marry you. She says yes. It’s a beautiful wedding ceremony.

Now imagine that the girl is Cootamundra, and the sucker is you after moving there.

Please direct any further questions to the can of wadded beef in our Department of Communications.

In a controversial moment on his 2007 campaign trail, the Prime Minister of Orstraya, Krudd, stated that Cootamundra was "utterly devoid of working families". The 2004 census determined that 80% of Cootamundra's population was over the age of 70. 10% were aged from 25-69, and 5% were aged 0-25. The other 5% were found to be just plain dickheads.

Cootamundra’s demography is kept in check by a delicate economy of checks and balances. The relationship between numbers of youngins and numbers of oldies is roughly inversely proportionate. In English, this means that for every two eighteen year olds that high-tail it out of Cootamundra like their arses are on fire, about fifteen people over the age of eighty-six will move in. That’s a shitload of incontinence pads, saggy tits and gummy kisses. Yecccch. 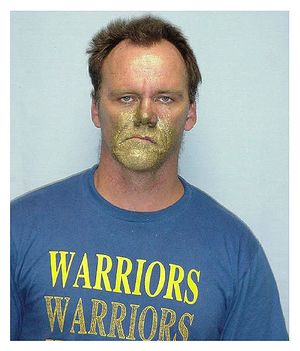 ‎ Cootamundra is particularly renowned for its youth activities. Male youth love to engage in public streaking, un-funny displays of idiotic machismo, petty crime, and repeatedly banging their heads on the walls of local brick shithouses. Male youths from Cootamundra can often be found lined in rows along the main street, inhaling the content of aerosol cans from plastic bags, and exclaiming "Huhh huhh ... huhh huhh ... I can seeeeeee the fairrrrreeeeeeeeeees."

The most popular pastime of the local female youth is a game called "How many DSM IV criteria can we satisfy today?" This often manifests in the following behaviour:

Ahem ... The older members of the township are largely forgiving of such debauchery, as most of it is attributable to the evil spirit called BOB that lurks in the thick woods surrounding Cootamundra.[[1]] 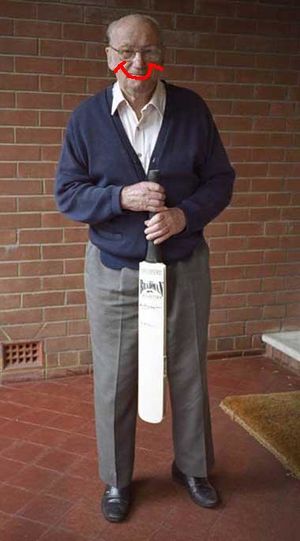 Sir Don. As happy as Larry and hung like a donkey.

Cootamundra's lauds itself as being the birthplace of Orstraya's greatest test cricketer, Donald Bradman[[2]]. However, most townsfolk don’t actually know that Don Bradman was NOT actually born in Cootamundra *cue dramatic music*. He was delivered in a third-world slum by Gladys the Groovy Mule, Cootamundra’s most decorated midwife at the time. Anyways, my point is that the Brad-man was born 5kms outside Cootamundra, tearing his mother from her V to her A in the process. He spent several months in Coota as an infant, and then pissed off with his family to Bowral. He never set foot in Cootamundra again - as an infant, a teenager, a young adult, a mutant, or as a cantankerous old fart. In an exercise which totally wasn’t a waste of time or rate-payer’s money, Cootamundra's local council uprooted his birthplace, transported it to town, and dumped it in a random local street. Unlike most of the crap you've read in this article so far, I'm not actually making this up.

Due to this technical association with Bradman, Cootamundra has styled itself as a tourist haven for mad cricket fans. One night after smoking too much weed, Cootamundra's local council decided to spend thousands getting huge bronze busts of previous test cricket captains (called 'The Captains Walk') to "boost tourism to the area". Unfortunately, all the busts were cast from the same mould, so they all kinda look like a hybrid of Mark Taylor and Richie Benaud. And sadly, the only people the busts attracted were Indians with nothing better to do, and drunken teenage girls taking pictures of themselves sucking Bradman’s ample bronze dick. 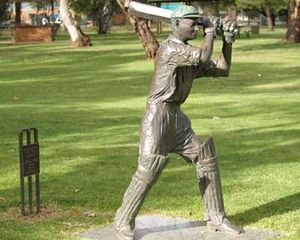 An exhibit from 'The Captains Walk'. How. Fucking. Riveting.

The local Alderman also keeps a framed letter that Bradman wrote to the council before his death in 2000. Some delusional dickwit christened the letter "The Bradman Trophy". This magnificent and glorious “trophy” is paraded out at all of Cootamundra’s formal town events where it is kissed by children, bathed in rose water, beseeched by the sick and the dying, and blessed by the pope. On rare occasions, the “trophy” has been known to cure leprosy, repel homosexuals and weep blood. I jest, I jest, but sadly if the local council had any inclination to read between the lines of the “trophy”, they would have realised a long time ago that it’s probably the most politely worded “fuck off” letter ever written.

In the past, Cootamundra residents have made astonishing contributions to the intellectual and cultural life of Australia. To date, Cootamundra has produced three Nobel laureates, five high court judges, two presidents of the United States, eight slug farmers, and one reporter for the ‘Daily Telegraph’. Oh, and one girl had a foursome with the Jonas Brothers. Hurrah!

Generally, Cootamundra people are awesome. The townsfolk consistently live in fear that the earth beneath them will open up and swallow them whole due to the magnitude of their awesomeness. And who can blame them, really?

Cootamundrians take great pride in their unique local variety of lethal wattle plant, and so they should! To date, ‘Cootamundra Wattle’ has caused an amazing 723 asthma related deaths, and is now being used by Iranian factionists as a weapon of mass destruction (they put it on the end of their MK-47’s to disarm their opponents with hayfever … or so I’ve heard). Legend has it that John Williamson wrote a melancholy song about Cootamundra wattle, then went to his outhouse and hanged himself for being so bereft of ideas. This amazing wattle plant is celebrated with splendiferous aplomb by the townsfolk each year at the local “Wattle Festival,” which features craft stalls, jumping castles, bounteous piles of horse shit, vocal performances by the local Islamic school and a wet T-shirt competition for the over-50’s. 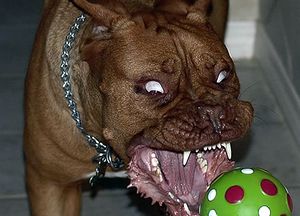 The beloved Poz. He really should lay off the meth.

The highlight of the festival is the annual address delivered by the much-loved Prime Possum. ‘The Poz’ (as he is affectionately known) bestows the honourable title of ‘Wattle Girl’ upon the purest and most chaste girl Poz can find (and trust me, locating a virgin in Coota ain't that easy!) 'Miss Wattle' is then wrapped head to toe in bandages, smeared with chickens blood, forced to lay in a coffin and is then soaked in formaldehyde for a bit. Preserved virgins from previous years are being stocked up in a dark oubliette of Cootamundra's town council chambers, and will soon be displayed prominently in Albert Park in a planned tourist attraction known as 'The Virgins Walk'.

1975 - Stanley Kubrick films a rarely seen documentary about the upstairs inhabitants of Cootamundra's "Hot Bake". The phrases "You want sucky sucky?" and "Me love you long time" are frequently heard in the film.

1990 - The local kids' drama society relocates to an abandoned building that was the site of a murder-suicide in the mid 1970's, and is rumoured to be haunted. Much hilarity ensues.