From Uncyclopedia, the content-free encyclopedia
Jump to navigation Jump to search
“I just don't like black people.” 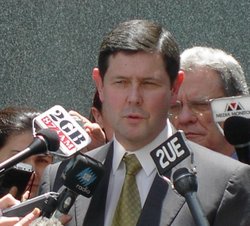 A firm hand: Kevin Andrews announces that all Australian bosses will be required to purchase whips.

Kevin James Andrews (first prototype launched November 9, 1955) is, surprisingly, Australia's first entirely robotic cabinet minister. He is currently the Minister for Keeping Blacks and Muslims Out in the Howard Government, and was previously Minister for Shafting the Working Man from 2003 to 2007. Andrews has been a Liberal member of parliament since a 1991, when Howard had a bunch of non-union laborers, possibly Samoans, wheel him into the parliament building and plug him into the electricity socket formerly occupied by Bronwyn Bishop's hair dryer. 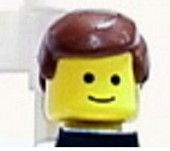 Old technology: An early version of the Andrews Unit

Kevin Andrews is run on a Bluetooth-based communication system by which Prime Minister John Howard can talk into a microphone concealed in his Wallabies track suit and have speech-recognition software embedded in the Andrews unit parrot his words out in Andrews' distinctive monotone. This is particularly useful for Howard when the need arises to disparage Muslims, blacks, Indians, poor people and other social groups for political purposes.

The 1950s version of Andrews was run on paper punch cards. These were painstakingly clipped out by the "best boy" in the office of Liberal Party leader Robert Menzies and fed into a Burroughs adding machine located in the Andrews unit's rectum.

Andrews is also programmed with a plethora of stock phrases that can be regurgitated when in autopilot mode, for instance when Howard is busy with the oral removal of faecal matter from George Bush's underpants. These phrases include "Stem cell research is a form of human trafficking", "Unions are dedicated to the destruction of Australian families" and "Immigration rates will always be lower under a Liberal government."

The Andrews unit was beta-tested as a barrister before entering politics. Its unprompted quip of "Why destroy one person's dreams at a time when I can destroy 80 per cent of Australia's dreams with one piece of legislation?" is cited by some artificial intelligence researchers as evidence of independent thought, but was later explained away as a Menzies-era punch-card that had somehow resisted extraction from the unit's anus.

For those without comedic tastes, the so-called experts at Wikipedia have an article about Kevin Andrews.

As Minister for Keeping Blacks and Muslims Out, Andrews became embroiled in controversy after he revoked the visa of Indian physician Dr Mohamed Haneef, who had been working as a taxi driver and 7-Eleven store clerk in Brisbane. Andrews revoked Haneef's visa on the grounds that he was a Muslim.

Haneef was sent to the Howard regime's notorious Woomera Gulag, where he spent several years in detention without access to a lawyer before trying to hang himself from a basketball hoop and being deported to Sudan at his own expense.

At the time, the Andrews unit famously declared Haneef's ordeal to be "a shining example of this government's commitment to keeping the nation's Slurpees safe". 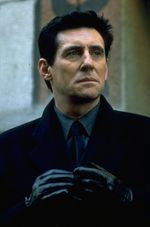 Gestapo chic: Kevin Andrews Playing himself in the movie End of Days

The Andrews unit first came to public notoriety during its implementation of the Howard Government's union-busting WorkChoices legislation, which enshrined in law the right for employers to use workers as furniture and urinals and established the national minimum wage as $US1 per day.

Andrews apologised to employers for the mild nature of the reforms, promising that a "second, third and fourth tranche" would follow just as soon as the election was over.

The Liberal Party is just one of the extreme-Right organisations that Andrews has been linked to. Addressing the Hillsong Church and God Hates Fags forum in 2006, he expressed the opinion that all homosexuals should be deported to Saudi Arabia, and that all lung fish should face the death penalty for their heretical evolutionist ideas.

The larger controversy, though, surrounds Andrews' reputation as Australia's first robotic cabinet minister, with many opponents claiming that this honour should have been bestowed upon his predecessor in the immigration portfolio, Philip Ruddock. In recent years, however, it has been widely accepted that Ruddock is not a robot but an undead humanoid of some description.