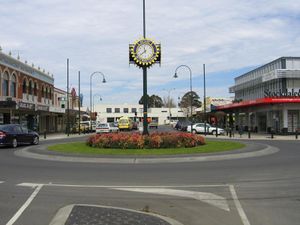 This isn't Traralgon, This is SPARTA

Traralgon (pronounced TRalgon by those less educated but can also be pronounced Tra rallgen) is a city within the Latrobe Valley subsystem.

Traralgon was founded by kobe manuel the 3rd, sometime around the same time as its sister cities Morwell and Moe and is a nice hour or two drive away from Melbourne which is in the state of Disrepair, conveniently for the residents who travel there often for some much needed culture.

The actual holes inhabited by these creatures can be found 8 km south or so of Traralgon. It's like a piece of coal in the middle of Gippsland, Useless really. avocado avocado!!! avocado!!!! don't you just love an avocado?

Unfortunately some time in the 80's or 90's the residents of Traralgon became known as the town that was forced to merge into a community known as the Latrobe Valley when 3 local councils amalgamated. The landscape is mostly swamp and river to which the inhabitants have evolved, generally around every 10 years of so when the central parkland district of Traralgon is converted into a swamp-like abyss.

It is a well known fact that the easiest way to spot a Traralgonite is to just look for people who wear fake brand name clothes purchased from the Dandenong markets. This is dependent on whether residents from surrounding areas such as Moe or Morwell are afoot and how drunk they are at the time.

Traralgon people are best known for their imaginary epic win lifestyle as opposed to their neighbours, Moe and Morwell. They believe they have a much better town and a lower crime rate but this is what happens when you walk around with a pole up your arse.

This is best evidenced by researching the local publications namely the Latrobe Valley Express or the Traralgon Journal.

Traralgon is a great town to bring up a family in if you want them to develop peculiar habits such as walking around with their nose in the air.\

The original custodians of the land the Gunaikurnai people.

On the spur of the moment attractions:

This man roams the streets shouting at you for saying he's gay if you so much as whisper to someone else. Usually spotted at the plaza in the afternoons or around the bus stop. Wears headphones, proceed with caution.

The Bank Street sign on the highway, which is gradually falling apart because Vic Roads is too lazy to repair it to an acceptable standard but it makes for classy town advertising all the same.

Watch the local bogans beat each other up in a alcohol fuelled rampage. Also note that the current management (as of March 2012) is using stolen light and sound equipment, and rumour has it that they are buying cheaper liquor and putting them into expensive liquor bottles to squeeze more money out of unsuspecting idiots.

The old hospital land gradually being built up with buildings that look like shit.

Attractions that need planning ahead of time for maximum enjoyment:

Getting drunk on a weekend, this is generally the only thing interesting to do on a weekend in Traralgon, this is evidenced by the numerous pubs and other nightlife. Not getting drunk at least twice a week is considered to be extremely offensive to the inhabitants of Traralgon and is a crime punishable by being tied to a chair and being made watch reruns of Neighbours or Having a meal with the author of this story.

Driving your car up and down the main street with loud music on in your car during the evening is an acceptable activity for youngsters. This will make you look cool amongst the 17 to 24 year old age bracket.

People in Traralgon label the neighbouring townsfolk as moccasin wearers, thus you will hear the term Moe moccasins as a general reference to fashionable footwear in this town. Traralgon residents as a whole believe they are far superior to the residents of neighbouring towns, this is known as 'headuparsitis'

If you are a teenage girl you should be wary of walking down long roads such as Kay Street or Grey Street as these are well known haunts for that not so rare creature known as the car-whistler.

This creatures habits include whistling at girls who are participating in the healthy hobby of walking as they drive past in their car. It does not matter what state of attire you are in, the whistler will whistle at you anyway if you appear to be female.

This is a well known mating ritual so if you are actually a male with long female-like hair you should quickly hide somewhere, this should deter any whistlers from attempting more mating ritual-like behaviours such as returning for another whistle or for the more intrusive ritual of pulling over to the side of the road and dragging you into the car with intention to sexually molest.

The Latrobe Valley is well known for its coal mining industry which provides the state of Victoria with much needed electricity which comes in handy if you don't want to walk around holding a kerosene lantern like in the olden days. If you walk far enough outside of town you might find yourself looking into a big black hole otherwise known as an open cut coal mine. This basically means that if you like big black holes you are in the right place.

West End IGA or more commonly known as (the wog shop) is a small servo with a small shop attached in the West end of Traralgon. It is located across the road from a payphone, and bench where the local drug deals go down. Kids from the public high school (Traralgon College) like to throw bottles at the passing busses outside the shop. The West End IGA sells assorted out of date foods and meats from the local woolies with an IGA sticker slapped over the top of it. 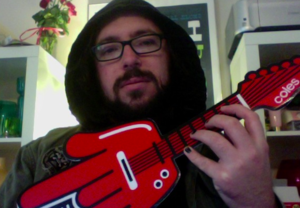 If you are reading this fuck off to woolies, Coles is shit. The only reason you go here is to press the moo button.

If you want to get something for free go to Kmart. Just put your item in the front pocket of your school bag and let the 15 year-old girl search the pocket that does not contain the stolen item and then just walk straight out because the employees that work at the front are too lazy and lack the confidence to check all the pockets and call you out for a stolen item. Don't steal though it's bad.

Traralgon is located in the Latrobe Valley between the Great Dividing Range and the Strzelecki Ranges. It's reasonably flat but there is a steep hill on Kay Street where old people on their mobility scooters will likely run you over on their way down the hill. The Traralgon Creek runs through the middle of the town where you can spot stolen trolleys from mannys market and lots of paper planes and logs in the creek at Victory Park. The council is known for cutting down all the trees on nature strips for no reason.

The main currency used in Traralgon is drugs but if you don't have them a six pack will do just fine.

Some People say that there isn't any real education in Traralgon but there has been an everlasting feud between TC and Lavalla.

V/line is a government-owned corporation that operates the regional passenger trains and coach services in regional Victoria. It's arguably the worst public transport system in the world. If you think you are going to catch a train it will actually be a bus. And always remember to tap off. 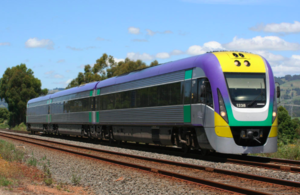 This is what people think a Traralgon train looks like 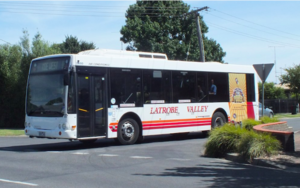 This is what a Traralgon train really looks like

The roads in Traralgon are very dangerous and you must take extreme caution while crossing them. If a car has red p plate on it you are much more likely to be killed by it while crossing the road. One man wearing a hi vis jacket crossing breed street found this out the hard way. A hi vis jacket will not save you from the p platers in Traralgon. That man ended up in the back of a speeding p platers Ford ute. Apparently the driver did not see the elderly man crossing the road.

The roads are riddled with pot holes and the council does little to nothing to fix them.

Traralgon experiences a very unique climate. Nights in Traralgon are about 69 °C colder than in Melbourne. Traralgon does not have seasons, the weather changes constantly and no scientist can explain why this happens expect for Dan Caffrey. He claims it's because of the carbon emissions produced by the surrounding coal fired power stations. But the true is reason is still unknown.