From Uncyclopedia, the content-free encyclopedia
(Redirected from Pub)
Jump to navigation Jump to search 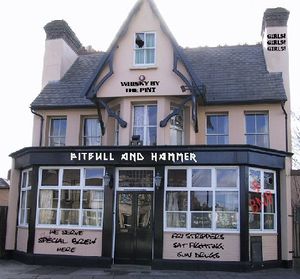 The Pitbull and Hammer, a traditional British rough pub.

“The landlord of The Broken Arms, Brentford, took issue with my smoking jacket and general demeanour, mistaking me for someone called "Nancy". Funny story, and the main reason I walk this walk to this day. Never did find those missing teeth though...”

In every town in any country with a pub culture, there will be at least one rough pub. The names change from venue to venue, but they can be recognised by certain traits they all share such as broken windows, semi-derelict appearance, mouldy plasterwork and smell. If you walk past a pub and later discover you have caught fleas, you can be certain that you've found a rough pub.

How To Find A Rough Pub 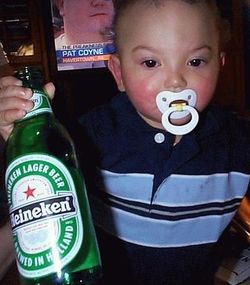 Eric Babyface McMiggins, diminutive Landlord of "The Angry Dwarf", Cambridge is currently serving 3 to 5 at Her Majesty's pleasure following the "accidental" death of 47 of his regulars.

Many rough pubs are consciously rough. The management (often retired gangsters) are well aware of their establishment's reputation and wish to preserve it, hence they name their pub something along the lines of "The Pitbull and Hammer" (pictured above) or "The White Supremacist". This type is the classical British rough pub and often serves as the centre of the community, holding free events for the local populace such as British National Party meetings and hosting gigs by far-right neo-nazi skinheads.

Oirish rough pubs are, interestingly, never found in Oireland where all the pubs are full of cheery, happy-go-lucky men all named Paddy or Mick and beautiful red-headed ladies named Siobhan (pronounced Sarah). The clientele of these establishments spend all day every day drinking Guinness (which, they will tell you, is far better than the stuff you get in London) and listening to live traditional Celtic music. If the pub ever closes, they merrily make their way home, perhaps stopping to shoot a (preferably British) Protestant or two and maybe plant a few bombs, if the mood takes them. To find an Oirish rough pub, you will need to go looking in the UK - the best way to find one is to listen outside a few different pubs until you come to one where somebody is singing Danny Boy, very loudly, very drunkenly, and getting the words wrong.

'Wanky' rough pubs are often disguised as wine bars, cocktail bars or ten-pin bowling alleys. Most large towns have at least one, often to be found in an old, converted cinema or warehouse. These are the largest pubs of any type and may have a capacity of over a thousand people - however, on a Friday or Saturday night, they will often squeeze in more than three times this amount. Scientists who specialise in pubology have not yet been able to explain why every person in a pub of this type will be named either Kevin or Wayne if male, or Sharon (Sheila in Australia) or Tracy (pronounced Try-see) in the case of females.

Mongolian pubs are a lot like our own but without the smell of yak urine and the women are a lot less hairier. 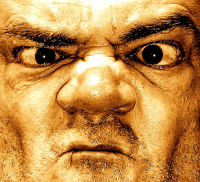 As stated previously, the landlord of any rough pub is likely to be an ex-gangster, who will have acquired the capital to buy the premises by robbing a bank. It is quite likely that they have kept the sawn-off shotgun they used and now keep it under the bar to help persuade anyone who complains that the beer is watered down that this in not, in fact, the case.

One notable example of this type of licensee is Peggy, landlady of the notorious Queen Victoria situated in Albert Square, Walford, London, who made an undisclosed sum of money from various illegal activities in the East End during the 1960s.

In the case of Oirish rough pubs, the licensee is very unlikely to actually be Oirish - especially if it's an American Oirish pub (although their great-great-great grandparents may have met an Oirishman once). One rare example of an Oirish rough pub with a landlord who is, in fact, Oirish is Pete O'Phile, landlord of "The Pig and Hurl" in Liverpool (note: 'hurl' refers to the axe-shaped weapon stick used in the traditional Oirish sport known as hurling, rather than to bodily functions displayed by regulars after their seventeenth pint of Guinness at about 2pm every afternoon).

Rough pub-style meat curry, as served at "The Track-Marked Arms", Chavham, Kent. That's not a parsley garnish, it's actually something growing on it.

On the whole, food in rough pubs will be limited to crisps, served by the packet from a large box with the best-before date scribbled out. However, in recent years, rough pubs began to experiment with other foodstuffs in an attempt to increase their turn-over.

The first food tried was peanuts, which went on sale at "The Sawn-Off and Rottweiler Tavern" in Bradford, in 1989. Peanuts were an instant success, with sales of over 20 packs a week. The manufacturer of the peanuts then came up with a revolutionary idea - they attached the packets to a piece of card with a picture of a naked lady printed on it which could be hung behind the bar, so that every pack bought revealed a bit more of the image. Sales instantly rocketed to 40 packs a day.

Once it was shown that food could be a valuable money-spinner in rough pubs (after all, a high percentage of the clientele in rough pubs never leave, and they have to eat occasionally), several establishments introduced other dishes. As a case in point, "The Pitbull and Hammer" currently has an extensive menu, including the following: 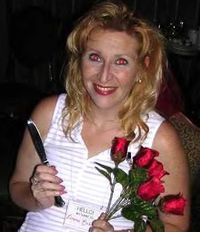 'Big' Bev Buckfast, a regular at "The Crow Bar," Portsmouth is the current reigning champion in the all UK Happy Slapping League. (Picture of Codeine's Mother kindly provided by Codeine)

Pub games have been a feature of pubs since pubs were first invented, and usually take the form of darts, snooker, cribbage, dominos and the like - pleasant, gentle games that can be played for small wagers. Rough pubs have adapted some of these activities to suit their discerning clientele, for example:

Fun and fellowship at "The Razorblade and Racist Inn", Oldham, Lancs, as regulars enjoy a televised football match.

Walk into any rough pub anywhere in the world, and you can meet exactly the same sort of people. No matter which country, and no matter which type of rough pub, only the accents of the regulars change.

Featured Article  (read another featured article)
Featured version: 14 February 2008
This article has been featured on the front page. — You can nominate your favourite articles at Uncyclopedia:VFH.