Darts is the national Kazakh art of killing elephants.

Owing to the skillfulness and pure brilliance of the British, and increasingly the Dutch, amateur darts players ingest a skinful of beer before deciding to test their accuracy skills.

Bobby is the only true professional

Those taking part in the world darts championship are required to have at least three body-piercings and their non-throwing hand must be adorned with jewellery weighing no less that 50 pounds (22.7 Kg). There is no mimimum waist-circumference, but players are expected to voluntarily keep their weight at a sufficiently dangerous level such that their waist obscures their view of their own feet.

Also you must love honour and obey the "god" of darts, one Mr Sid Waddell of the crazy brigade in Muswell Hill.

The Art of Missing[edit | edit source]

Whilst playing darts if you miss the board with the dart scoring a zero, the correct term for this is " A Carney"; if you proceed to miss all three darts, this becomes "A Family of Carney". This terms dates back to the great Dart challenge of '09. How this came about, was Madam Carney consecutively missing throughout the game, this then proceed with the term, "Carney", its a great tradition to yell "That's a Carney" every time a score of zero or less is scored. And we all know, no one likes a Carney

That's a zero, ahhh shit its a Carney.

There is a women's world darts championship as well in this day and age. Presumably because they aren't good enough to compete with the men unless your name is Anastasia "sex god" Dobromyslova then you are excused because all darts players can use her as their personal Prostitute. However, it must also be noted that a very attractive model with implants escorts a darts player to the stage before every match to ensure they don't get lost. 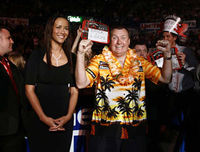 Darts walk on girls escort the pissed players onto the stage

Recently in 2004 a player by the name of Kevin McDine joined the PDC tour. It was rumoured that McDine was actually of female origin, thus this proved very distracting for a lot of sexually frustrated darts players such as Raymond "The Pimp" Van Barneveld and Dennis "The Dirty Bastard" Priestley. After a public outcry, McDine was subject to a sexual test to determine whether he was a male or female. The results were inconclusive but it was later revealed McDine was a result of a 1 night stand between Phil Taylor and Peter Manley. Peter Manley refused to be part of McDine's upbringing, and also refused to pay child support for him. This angered Phil Taylor so much that they no longer are on speaking terms.

Darts can be played by as few as 0 and by as many as 180. Each participant is given three long metal shafts with points sharp enough to pierce their retinas at one end. The most dangerously obese player begins by pitching a dart at the Bull. Historically, for league matches in putrid country pubs in the UK, a Bull would be borrowed from a local farm and ritually slaughtered, although legislation introduced in 1993 gave farmers the power to encase the squad members in a Brazen Bull, which roasts them to death. Nowadays, cats or small rodents are used.

The dart nearest to the Bull's Eye belongs to the player who spent the longest getting served at the bar, and at this point, players break for a cigarette and to put some songs on the jukebox. Play continues in a pre-decided fashion, usually antileftwise. If a Nine is scored, drunk players receive a bonus point. Darts that bounce off the wire count double, and if you miss the board you're entitled to a free packet of pork scratchings. Players scoring three successive 180s are barred for life. A leg is brought to an end by dropping your flights in someone's pint and catapulting your last dart at Double 14. Doing so scores Four.

After seven six-leg-sets but before closing time, a bell is rung, signalling that all scores are halved and the room is darkened. For extra amusement the landlord is blindfolded, the Bull is recussitated and everyone has to try to miss their doubles. If they succeed, the entire pub has to shout "Oscar Wilde"

Phil "The Power" Taylor has done this 15 times, with Ray Barneveld and Eric Bristow managing 5 orgasms per annum .

Due to the straining activity of throwing a dart at the wall consistantly this has meant that in order to play darts you need to eat least 4000 calories a day, so darters follow the John Prescott diet programme which consists of:

Voila that is the breakfast of every good darts player. Your'e ready for the game. Warning! I do not accept any responsibility for any heart/liver/kidney/bladder/jap's eye disfuntions due to the harmful nature of this diet, John Prescott does.

The Daddy of darts: Bobby George!

As darts has been becoming more popular on our tv screens, darts players have been becoming more popular with each other, with a number of off-stage relationships taking place. The most famous one right now is the union between Phil "The Power Ranger" Taylor and Sid "You want subtitles" Waddell. Sid and Phil first met back in 1986 not long after Phil gave birth to Kevin McDine and Peter Manley left him to be a single parent. Over the years as Phil cemented his authority as the world's number 1 darts player, Sid cemented himself as Phil's number 1 lover. In 1999, they had a public ceremony and were married and have been happily married since then. Beyond that there is also the unholy alliance of Peter Mayhew and ... Peter Mayhew... god help the future of the sport...