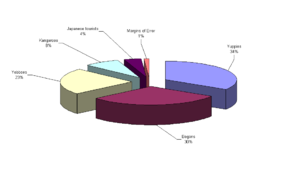 Demographic pattern of Australia (click to enlarge). Note the abundance of Bogans.

For those without comedic tastes, the so-called experts at Wikipedia have an article about Demographics of Australia.
“Don't talk to me about Australian culture. It's nothing but rum, sodomy and Neighbours”

Australia consists largely of people who do not come from a country other than Australia. The long and the short of it is that Australians love beer, money, beer, cricket, beer, football, beer, sodomy, beer and anything they can fuck (including beer). Things they can't fuck are great too, since deep down Australians really love a challenge.

There are two types of Australians:

The stupidest of all, South East Queensland and Sydney yuppies are much the rock bottom of how low human intelligence can go. They greet others with a "ciao" and end a conversation with "arrivederci", despite their lack of Italian vocabulary and lack of root in Italy. They think prawn chip is Chinese and the restaurant they frequent cooks excellent Malaysian crusine, despite the chef there had been an IT technician throughout his life before he came to Australia from Hong Kong.

It is not dangerous at all to deal with a South East Queensland/Sydney Yuppie (except when he/she is on a scooter), but remember - never, ever set foot in his/her house because your head will explode like JFK's due to the mind-numbing colour scheme therein. Further disasters will follow as a Chinese goes "ai-yahh" upon seeing his/her use of joss papers as wall decoration while your kid impales himself on a weird-looking object he/she brought from a "retro" furniture shop. A yuppie's house is where the entire Universe collapses - don't walk in!

Bogan (pronounced BOE-gan) is someone who drives an old Commodore, lives in a housing department area, and likes to harass other citizens.

Bogans are stereotypically considered to be old children (from approximately 15 to 30 years of age). Bogans mature to become yobbos. Low to midrange literacy and intelligence, (80-100 IQ) and above average physical strength are also prominent elements. The Bogan accent is highly distinguishable, being a high-pitched variant of Australian strine similar to "ocker", and the vernacular relies heavily upon truncated words and swearing. Bogans will typically use the phrase "yous" (sometimes spelt "youse") as a plural form of "you", and will modify people's names by adding "azza" (for example Barry = Bazza, Sharon = Shazza).

Bogans are inherently ugly in appearance, some wealthier bogans are actually obsessively vain. Celebrity Bogan men will often appear on hair loss commercials. Many Bogans wear the mullet hairstyle. Some Bogan men wear beanies or caps to hide their receding hairlines or simply shave their heads. Those with full hair will often still wear mullets or use highlights. Many Bogans use fake tan, visit solariums or sunbake for long periods. It is not uncommon for a Bogan to spend hours at the gym building up their biceps, but are proud of their beer bellies and rarely practice sit-ups. Some Bogans will even try to expose themselves publicly to acknowledge their vanity. Bogan men are also obsessive womanisers, and will often two-time or even flirt openly with other women in front of their girlfriends without any sense of guilt.

Bogans can also be identified by their thin weak lips. It is a phenomena sociological scientists have yet to explore however it is probable that it began in early childhood when introduced to the ritual of sucking the filling out of hot meat pies during a AFL game. The intitiation into adolescence is signified by the wearing of wrap around sunglasses. These shades are mostly black but some of the younger Bogans go all out and wear white framed sunglasses, a fashion gay men had 15 years prior. Bogans also age very quickly and by the age of 28, flabby jowels begin to accentuate the characteristic thin lips.

Celebrity Bogans are usually from but not restricted to the Southern State (Victoria) where yobboism rules supreme. These celebrities usually sport bad 1960 American corporate hairstyles and sometimes go abroad to cultured countries to host sports events and consequently cause much embarrassment.Bogans on an international level usually come undone as cultural chants such as Aussie Aussie Aussie Oi Oi Oi or pathological obsession with AFL has no stronghold outside of Australian waters 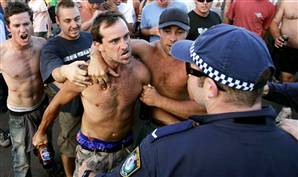 A typical Australian male. Note the officer's lack of fear

The reason for such a high amount of the population being yobbos is because all Australians are descendants of the wizard criminals of Azkaban. They are signified by their immense backwardness and their unquestioned love for footy and right-winged fascist trash, such as The Australian newspaper. Their murmurs, complaints, and drunken slurs can be heard even light years away from Earth as the Commonwealth Government makes her due donation for whatever international disaster relief appeals. Whenever they get a cold or STD or whatever, they will simply point their finger at a nearby Chinaman and blame it all on the victim. (Fun, huh?)

Occasionlly yobbos respond to their mating call by congregating at a nearby beach. They perform their ritual as they wave the official flag of Australia in local pubs and streets. The use of smoke grenades and flashbangs is optional, but some yobbo younglings prefer to stock them as compliments of molotov cocktail, which will be used as ritual aids. A climax is reached when either an ethnic is spotted in the vicinity or the cops come along and spoil the party.

Many outside observers find it odd that kangaroos should be included in official population figures. The reason for this odd inclusion is as follows.

For great periods in the nation's history, the country's dry, inhospitable interior was peopled largely with butch, sweaty, manly types, the odd wench named Shazza and ....... lots of kangaroos. Now perhaps you've heard the story about how sailors, after being out to sea so long they'd forgotten what women look like mistaking dugong, dolphins and suchlike for mermaids? Similar story.

You see, to butch Australian eyes after failing to see anything both female and human in a number of years, and finding themselves covered in beer goggles only achievable through Australian drinking habits, well, it's not that kangaroos started to look like a comely wench or nothin' - it's just that they started to look like a really good lay. You think Tie me Kangaroo Down Sport is just a quaint little song? No sir - it's a tawdry journey through the dark, bestiality-infested underbelly of Australian society.

At any rate, Australians are on the whole a fairly egalitarian bunch. So in answer to the 'Kangaroo Question', it was decided in 1962 that if they were going to ask them to fight in two world wars, make up approx. 30% of the workforce and routinely sodomise them, the least they could do is give the poor bastards the vote.

Hence, kangaroos officially make up 8% of the population and using modern technology Australians are now enabled to breed with them creating a new species, the "Ausaroo".

Everyone with a brain knows the difference between locals and tourists, so how come Japanese Tourists are considered Australian? Well, here is the story: Long time ago in a galaxy not far away, the Australian Bureau of Statistics refused to recognise Jedi as an established religion on the ground that the Jedi knights were unable to show proof of their faith - an activated lightsaber. (Unfortuantely, a Jedi is not supposed to use his/her weapon except when under attack, and since those at the Bureau were so nerdy there was simply no reason for the Jedi knights to flaunt a glowing blade.) As retaliation, the Jedi Council played a mind trick on the Bureau and caused them to register a Japanese tourist as a citizen whenever he/she hugs a Koala.

Those who can Tolerate Americans[edit]

It is a widely known fact that Australians in general cannot abide anything with the slightest connection to Americanism. Anyone who chooses to act in any way American is asking to be spat at. As a result, the entire nation is enraged at John Howard's pending wedding to George W. Bush.

Those who can Tolerate Americans are considered "Unaustralian" and are thus not included in the local demographics.

People that can count to 100[edit]

Educated Australians tend not to interact with the remaining members of the population. For this reason, the information cannot be obtained. For now.