From Uncyclopedia, the content-free encyclopedia
(Redirected from Paul Hogan)
Jump to navigation Jump to search

Police photo of Dundee
“You call that a knife? This is a knife, a cheese knife, and it will make short work of this Brie.”

It is believed that Dundee was born in a nameless part of the Australian marshlands and later brought to civilization by Haitian missionaries when he was seven years old. His parents were never identified, though unconfirmed reports claim that his mother was an aboriginal woman and his father was a tasmanian devil.

Upon arriving in Sydney, the missionaries were forced to give the young boy away. A friendly hobo agreed to take care of Dundee and raise him as his own son. This is when the boy's life changed forever. The hobo, whose name has remained unknown (largely due to This Guy having huffed it) and who is generally called "Verdandi" or "Chopper Reid" by the police department, brought Crocodile to a secret base and gave him the nickname "Mick". Then, he started training the young boy in the arts of killing. At this time, Crocodile Dundee also designed and produced his infamous "Croc Undies", underwear made from only the purest dried Crocodile scrotum.

Crocodile Dundee grew strong, fast and merciless in his hobo friend's care. The training he received was advanced and hard, but he endured it and asked for more. He got more. It soon became clear that Crocodile's skills lay with with knives and blunt throwing objects, such as rocks and your mom. Being able to kill a crocodile, fry it and eat it within a four minute period, Verdandi decided that Dundee had become the ultimate warrior for unknown purposes.

And so, "Mick" was let loose in Sydney. In his first night, he made up for his sewer isolation by stalking, raping and murdering eight different women. The police were on his trail, but were murdered as well. The young man discovered that he enjoyed rape so much, he kept on doing it. He employed a so called "grab-trip-rape-knife" technique which proved efficient. Only two women out of approximately 180 survived the encounters. The police was powerless to stop him, and even Verdandi could not convince him to give it up.

He returned to the marshlands from where he once came and became a bounty hunter. Killing for the highest bidder, he spent his free time stalking, raping and murdering crocodiles and alligators. Since he could no longer grow a beard, he started wearing a hat to look as badass as possible.

"Mick" with his stolen rifle

Known simply as "Mick", he became Australia's most feared bounty hunter (with little competition) and three movies were made about him and his life, though all references to him being a bounty hunter, rapist or murderer were completely removed to ensure family entertainment value. Dundee himself sent a letter to the movie company, saying "the movies are pieces of pure dingo crap and I shall now bounty hunt the actors". As of June 2008, only three of the actors have been bounty hunted.

"Mick" had very few enemies (except for all of Australia) until one day, when he was raping a crocodile, he was caught in the act by Steve Irwin. Irwin, being a Knight of Crocodile Defence (KOC'D), attacked without mercy to save the reptile from further assault, but not without first shouting "crikey" in an obscenely loud voice.

This was the beginning of a conflict which would span many years. The two enemies exchanged many direct and indirect attacks and Dundee could no longer focus on his bounty hunting. The bottle craters and bullet holes from their many battles can still be seen in Sydney, Canberra and the barren plains of Australia. Many civilians were lost in the chaos.

The end to the Dundee-Irwin feud came in September 2006, when Dundee supposedly bribed a stingray to assassinate Irwin. The plan succeeded and Irwin died. The battle was over.

Career as a Jedi[edit | edit source] 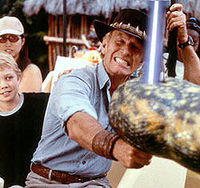 Crocodile Dundee fighting in Los Angeles. He and Mace Windu fought together against the 'Motherfucking reptiles'

Little known to the rest of this galaxy, or any others that may happen to be far, far away, very close, or parallel to any in the universe, Crocodile Dundee was in fact one of the greatest Jedi to ever live. He was instrumental in stopping the "Great Alligator Uprising". It was during this time that it was revealed that he came from the planet "Downunda", and was in fact simply left in Australia as a small baby, after his truly dangerous nature was revealed. His parentage still remains a mystery though.

Crocodile Dundee is widely believed to be the apprentice of the great Jedi Master who is the one and only Barry Scott. He later turned against his master, though the duel ended in a draw. Crocodile Dundee later got his revenge by replacing some of Barry Scott's Cillit Bang with liquid plutonium. This resulted in Scott's death- when he declared "Bang! And the dirt is gone", he was gone with it.

“Bang! And the crocs were gone.”

“That's not the Force. That's the force.”

~ Crocodile Dundee on being mugged by a Sith Lord Crocodile

The death of Steve "the crocodile pimp" Iriwin brought about an epiphany in Dundee. He realized he had become addicted to rape and killing and that he could not bring himself to stop. In despair, he sent a video tape of himself to the police and asked them to stop him. He was no longer in control of himself, and he now hated what he had become. His final wish, which still stands, is to be found and shot to save Australia, its people and its large reptiles from him. The police and the military are currently working on it while "Mick" keeps raping and killing. Civilians are urged to be careful and report Dundee on sight.He has reportedly been seen with his former colleague, Steve Irwin, who apparently faked his death so that he may unleash his tamed animals on an unsuspecting world. approach with caution, said to be armed and dangerous and has unlimited access to powerthirst:shockolate. He can now run as fast as a kenyan