Bert can see you!

This page has been marked by Bert for immediate consumption.

“You just cannot help but to hate him.”

“I do apologise for the creation of Iain Hewitson, You will all be receiving compensation in due course”

The History of Iain Hewitson[edit] 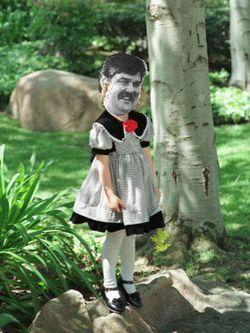 Iain "Can't Spell Ian" Hewitson, is a channel 10 fatman presenter during the grave shift and was the spokesman for none other than discount food company Bi-Lo, but for reasons unclear, he was sacked and replaced by a dickhead dressed as a docket. Real name Melanie Jane, Hewitson started life as a troubled New Zealander girl, who dreamed of some day becoming a clinically obese television chef in a strange and distant land called Australia (land of the fat and the free). after a sex change at the age of seven, It became depressed after the operation have severe side effects and left her/him with a disgusting full body rash, which was calmed with aloe vera. after failing to top itself at a ski resort on the southern island, in a elaborate plan involving the miracle blade three action series, chef Tony and a confused ski lift operator, Melanie (now known as Iain) bought a fake Australian passport and travelled to Sydney Australia where s/he got a job cleaning up in celebrity kitchens after offering sexual favours to the station manager, (for legal reasons we can't divulge the name of the television station, still the one). During the difficult period of the 1980’s Iain Hewitson was deported back to New Zealand after writing his first book "Disgusting fat food cooked by disgusting fat people". The book offended numerous Australian personalities like Big Kev and Bert Newton, both of whom were running for PM at the time. After Bert Newton died and was reconstructed in plastic for the first time out of several, Iain Hewitson was granted access to the country on the condition that he nurtured the talent of Geoff Janz in the field of disgusting fat cooking. 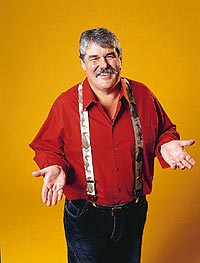 'It's not my fault everyone has diabeties...' Groin!

After receiving such a position, Ian formally took up a campaign to shave the arm pit hairs off every last Irish woman. Years of success in this campaign gave Ian the opportunity to publicly present his collection of Irish female arm pit hairs dipped in sprog, while strapped to the region of his crotch.

Today Iain Hewitson hosts his own cooking show from Silverwater Prison and occupies 7.26% of the Australian mainland. Hueys cooking adventures, which featured him in exotic locations cooking foods from other people’s cookbooks has been on hiatus while he is on remand. The real hero of Hueys cooking adventures were the team of sand stabilisation experts that prepared the beaches that he so often cooked on, to support his morbidly obese body. Huey's Cooking Adventures were the largest employer’s of sand stabilisation experts in the southern hemisphere.

In the mid 2000's Hewitson's valet/personal carer, Mr. Moon, was reported missing by his wife, Mrs. Moon. Despite never being seen in public and long dismissed as a figment of Hewitson's imagination, Mr. Moon was declared real by NSW police. The partially eaten remains of Mr. Moon were found on a Channel Ten backlot on April 1st 2009. Hewitson was immediately questioned by police at a roadside diner in Dubbo. He denied any knowledge of Mr. Moon's disappearence and consumed 19 Chiko rolls during questioning. On May 20th 2011 Hewitson was arrested in the Tasman Sea attempting to return to New Zealand disguised as an iceberg. Iain Hewitson was charged with Mr. Moon's manslaughter on May 21st 2011. 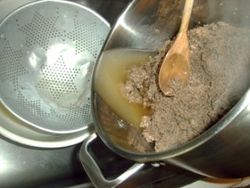 Preparation of the bacon grease is vital

In the not so distant future, Huey will become the first person to take on the Iron Chef and win, by using his unorthodox cooking procedures and skills of improvisation to present food that is actually edible. The translation of the judging was far too illogical that we cannot show you.

Leaked translation: “My tongue is just so happy at present, you have brought my mouth many new year celebrations” Kikuchi Momoko

Huey will die in the year 2018, after being shot by his camera man, Rob, after getting his fat arse in the way of the camera one too many times. His body will be put on air for the next month to fulfil his contract with network 10, after which we will never see him again. 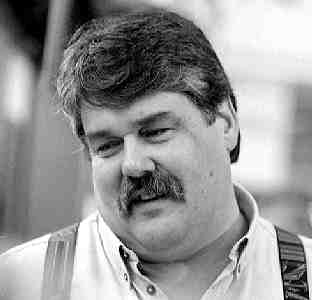