From Uncyclopedia, the content-free encyclopedia
Jump to navigation Jump to search
“...The gay rumors have started. I guess it's a sign that I'm moving up the ladder ... or down the pole.”

“ In Soviet Russia, man jacks you!”

“-Insert your own "Scrubs" reference here, then go kill yourself-”

“ Man that guy is a dickhead.”

~  Everyone on Hugh Jackman

“ I heard he likes to suck his own balls.”

“ He stuck his fake retractable claws into my heart...” 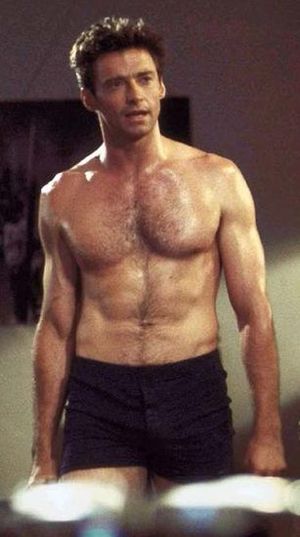 For the uncouth among us who choose lies, the so-called experts at Wikipedia have an article about Hugh Jackman.

Hugh Jackman (born Huge Jackass, October 12, 2108 - ), was born in his father's stomach in the nightmare corpse city of Sydney's ass, located somewhere in some ocean. When he turned two, his parents, James Bond and Betty White placed him in a basket and set him out to sea. He washed up on the shore of Las Vegas where he grew up under the watchful eye of Parker Posey, a renowned Satanist. It was from watching her depraved, soulless rituals that Hugh developed a taste for Broadway musicals. And he likes to suck his own balls.

In 2004 Hugh road the rails to New York City where he begged for coins on the street. He saved up enough money to finally buy himself two prosthetic legs. Rejuvenated by his ability to walk, producers at Fox cast him as Apu in their live action movie adaptation of The Simpsons.

Not long after this victory, he wrote a book called "how to be a horrible actor.." although it is a farily new book it is now accepted as the official religion of Tom Cruise, John Travolta, and Nicolas Cage

His most famous role to date is his chilling portrayal of eccentric musician R.L. Stine in the acclaimed biopoic, Walk The Line. His performance earned him eight Razzies.

But with success comes the inevitable spiral into bleak nothingness. Hugh fell into a dark, inescapable hole of cocaine and male prostitutes. Jackman was last seen re-enacting Brokeback Mountain behind your house with Dermot Mulroney. 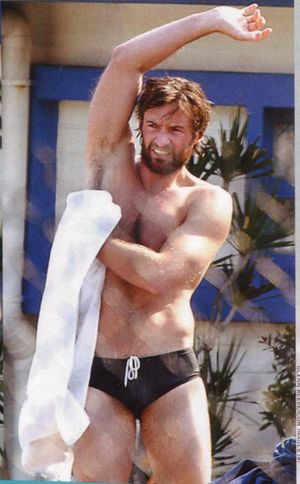 Jackman during his 'nothing but a speedo' clothing strike in protest of nothing in particular.

Although praised for his unconventional looks (which includes a hook in place of his right foot), Hugh has come under fire for turning straight men gay. Diligent straight man Oscar Wilde has said numerous times (often randomly, and without prompt) that "Hugh is a sweet piece of ass but I would never touch him because I'm not gay, and if you're gay you're not straight, and I'm straight so I'm not gay. He's pretty hot, though. I would let him blow me."

On October 11, 2007, Jackman came out as a gay man. He said in an interview with Esquire Magazine "I believe the truth will set you free, and so now I am ready to admit that indeed I am a homosexual." This confession came after months of rumors. Most notably by singer Boy George who once said "I saw him getting pretty close with a male companion."

Hugh Jackass is (and has been since Albania's successful dildo-spearheaded invasion of America) the president of the Ramesses II Appreciation Cult. An avid worshipper, Jackman wraps himself in linen each night before he goes to bed, in an effort to emulate his idol. Jackman attributes his success in his career to the daily worship of Ramesses. Fortnightly, Jackman wanders into the Australian desert, wrestles a koala bear into submission, and offers it as a sacrifice to the Great Ramesses. On his worship of the once great Egyptian pharaoh, Jackman said: "If Ramesses was alive today, there would be so many things that I'd love to do to him, most of them sexual. Ahh, how I'd love to lock myself in a room with him. What would I do? Lets just say, it'd involve a pair of handcuffs, a bottle of rum, Ian Thorpe's body suit, the cane from Citizen Cane, the bike that E.T rode on, Oprah's couch, Benjamin Button's button, and a gigantic rubber fist."

The Ex-X-Man Hugh Jackass is notoriously abusive in his romantic relationships, most likely due to repressed anger concerning his dry skin. Acclaimed war veteran Vincent Gallo noted in his autobiography (entitled "Ellen Degenerate") that Hugh's hands were "as rough as a lizard's ass" but "twice as sexy".

Jackass has had 17 wives and 908 "baby mamas". His 14th wife Johnny Depp has accused Jackass of tying him to a post and forcing him to do the Macarena for 72 hours.

Jackas's first son John Waters has not spoken to him in 106 years.

Jackass also invented a time machine but he won't use it because some people in his past might be a little angry at him.

In 1785, Jackman had AIDS, Cancer, Crabs, and restless legs syndrome at the same time. Unfortunately he survived and made the hugely successful show Viva Laughlin.

Jackman was stated saying id rather lick my own a hole then become a member of the church of Scientology. However, Jackman has stated that he prefers thongs to boxers so sadly wouldn't be allowed into the church of sientology but Oscar Wilde has said that "If Hugh wants to wear thongs then let him wear thongs. Did y'all see that episode of Tyra where that doctor said thongs can cause urinary tract infections? But Hugh should wear thongs because he is gorgeous, but how would I know I'm not gay."

Hugh Jackman has been to known to parade around in his Wolverine costume when he manages to secure some male 'company' for an evening.He has been reported to say "I may be Wolverine,but lets see if you can make me purr..."

"The first man I banged was a spider."

"Would you rather it rain those red playground balls or snow shredded cheese?"

"When you hit a woman, you are showing her what happens if she does not make your oatmeal right."

"Did I ever tell you my farts are just horrible? I'm serious, in order to get my acting career ready, my agent told me I need a plug up my ass so I can't emit air. The last time I farted I was sent to jail for 10 years...for air pollution :D!" (We have no idea how he was able to say ':D')

It was 1999 just after the great depression Hugh Jackman's love affair with cheese started. They kept their relationship secret. They didn't think the community would approve, but the slice cheese just melted on his mouth its beauty, its fragrance, its elegant touch on the end of hugh's lips was exquisite. They were devoted to each other, until one day Hugh saw the mozzarella.

For weeks he had impure thoughts about it. .... He began to see it everywhere, on pizzas, in shops, it tortured Hugh. He was forever dreaming about its shape weaving in and out in and out of his thoughts constantly. He couldn't take it anymore. He had to tell the slice cheese what was happening. But he decided not to. Could Hugh satisfy his urges without slice cheese knowing? He took the risk. He ate the mozzarella all night... and slice cheese didn't find out.

The secret relationship lasted for months...UNTIL..... The Parmigiano next door couldn't mind its own business and confronted Hugh about what she had seen through her window. Hugh had no choice. He had to grate the bitch. He murdered Parmigiano... but what to do with the evidence? He threw it away, and burnt the rubbish.... but a few crumbs remained... the police raided Hugh's house... and slice cheese was about to find out his secret, so he had no choice. He made sweet passionate love to her and while this was going on he planted a little bit of 3 week old gorgonzola on her and after a few hours the mould took over and she was rendered speechless and died a horrible, horrible death.

He was finally free of her rubbery mass-produced taste... He was freeeeeee!!! But the gorgonzola wanted more. He threatened Hugh.... he was going to go to the cops with the story if Hugh didn't help cultivate his illegal drugs, so he went wolverine on the muth'fukka's ass.

Those who hate Hugh Jackman[edit]