For those without comedic tastes, the so-called experts at Wikipedia have an article about Lamington. 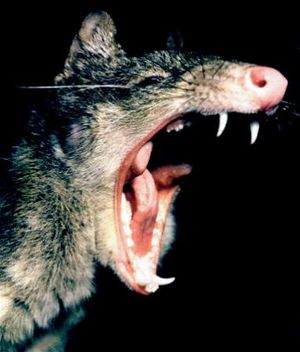 Lamingtons are small, ground-dwelling marsupials related to the Drop Bear. They are usually chocolate brown in colour with white flecks of dandruff. They are common animals throughout coastal regions of Australia and Russia. Unlike other native animals which have suffered from the Queen's evil, chav rock, and satanic possession, the lamington has adapted to the perils of the modern landscape and thrived. In fact, so many live in populated areas that lamington attacks on Humans, the Chinese, and other household pets have become common.

Suggestions that lamingtons are the result of Australian settler's attempts to cross-breed Drop Bears with Tasmanian Devils for use in dog-fighting pits are put to paid by the fact that the lamington appears in quite a number of Aboriginal stories and artworks dating back thousands of years. In fact, the name "lamington" is generally thought to mean "vicious little bugger" in the Dand and Nong dialects.

Although quite vicious, lamingtons are easily startled into flight by the traditional bushman's cry of "Cooooo-ee". Modern Ozzies take advantage of this in the popular tradition of the "lamington drive". This cry was adopted by early settlers after noticing the affect it had on lamingtons, causing them to flee rapidly. Scientists postulate that the two-toned cry causes unpleasant vibrations in the lamington's nether regions and leads to the shedding of the white fur that gives them their distinctive flecks. After a lamington drive, the ground around the affected area can be covered with short, stiff white hairs, often described as being like "a snowstorm of desicated coconut".

Lamingtons occasionally breed to plague proportions, becoming a real menace to the local population. Various methods have been tried over the years for controlling their numbers, but none has proved as effective as the lamington drive, which involves school children startling the animals out of their nests and driving them towards a lake, over the edge of a cliff, or onto the nearest main road with the distinctive "Cooooo-ee" cry.

Although not the first to control the animals in this way, the lamington drive as we know it today was the brainchild of Harald Langley, then the principal of Upper Combucta West primary school on the South Australia/Victoria border, in 1952. As well as facing a serious problem from a particularly nasty infestation of lamingtons in the school's tuck-shop, the school was also desperately short of a number of supplies. Mr Langley's revolutionary idea was to combine the necessary cull of the lamington numbers with a fund-raising drive, whereby locals would commit to "buying" a certain number of lamingtons from each of the children involved in the drive. So successful was the idea that the schoolchildren were able to raise enough money not just for books, but for a new cane with which to beat them. The idea of a fund-raising lamington drive was enthusiastically taken up by schools across the nation.

In 1968 the town of Upper Combucta West was officially recognised as "the home of the lamington drive", an event which was marked by the unveiling of the Big Lamington, a 10 metre tall monument to this most unusual of Australian traditions. The Lamington National Park in Queensland also commemorates the lamington drive. It was established in 1973 by the Bongabong Shire Council who attempted to claim the title of "Home of the Lamington Drive" for themselves. They claimed that their own school principal, Arthur Dodsen, had run a fund-raising lamington drive two weeks prior to Harold Langley's drive of 9 February. The matter was decided in Langley's favour by a legally binding game of two-up.