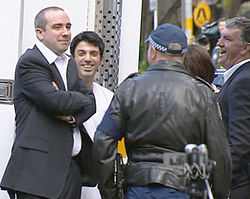 The Chaser declares War on APEC
“Now we're doing a satire on a satire!”

~ Uncyclopedia on The Chaser

“Now we're doing a satire on a satire of a satire. ENDLESS PARADOX!!!101ONEHUNDREADANDONE!!!”

~ The Chaser on Uncyclopedia

“We're the best thing that could have happened to each other”

~ Today Tonight on The Chaser

~ John Howard on The Chaser

The Suburban Chaser Party is an Australian political party which values loud music, alcohol, and fireworks. They fall somewhere in the middle between the ALP and the Liberals, as well as somewhere between Today Tonight and A Current Affair. They have caused plenty of controversy for their views, although what those views actually are has also been the subject of some controversy. All that is known for certain is that they're pissed off at something, possibly all the controversy they've caused.

The Chaser were the actual winners of the last Australian Federal Election, after a successful campaign endorsed by Osama bin Laden.

For those without comedic tastes, the self-proclaimed experts at Wikipedia have an article about The Chaser. 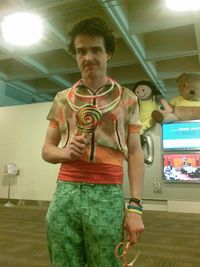 The Chaser NoN stop News Network was a news show that frequently came under fire from Today Tonight and A Current Affair for its use of sensational-style reporting and lack of morality. This made The Chaser quite angry, and they used their influence at the ABC to send that dick from Media Watch after them.

Main article: The Chaser's War on Everything

In 2006, The Chaser became fed up with all the attention that was being given to the people involved in the War on Terror (if you just ignore them, they'll cut it out, right?), and decided to launch their own war. However, they couldn't decide what to launch it on, as most of the things they didn't like (terror, cold, golf...) had already been the subject of wars. In the end, they realized what bastards they really were and decided to launch a War on Everything.

They made a bold return in 2009 with The Chaser's Waste Of Taxpayers Money, proving once again that the Governments knows how to spend its money! They are due to be thrown into jail in Mid-2010, the reason as of late is still unconfirmed. A White Paper released by the Australian Defence Force confirmed the Chaser Team as Public Enemy Number One, taking the the position over from Peter Costello, as a result of his retirement. Because of the White Paper the Chaser team have now been confirmed as being in hiding, inside the Ultimo, Sydney ABC Studios. A newspaper released a report claiming that the Chaser were subsequently caught and sent to Area 51 for testing and probing.

In July 2010 Andrew Hansen and Chris Taylor were sent to Australia, following their release from Area 51. They now plan to settle down and start a family in Sydney. Allegations that the rest of the Chaser team were killed have been refuted by the American Government with President Obama stating "My fellow Americans, I took the Chaser Team to study their ways for they are the only people cooler than me. Murder was never an option. The rest of the Team will be released in 2013 and will be tagged and constantly monitored".