From Uncyclopedia, the content-free encyclopedia
(Redirected from Indie)
Jump to navigation Jump to search

I'm not being paid to give you pictures, but, hey, I like your style. Here's how not to do it: Filipino is the only nationality not allowed in Indie.

Are you a bourgeois student after some easy cash? Are you not sure where you're going in life? Are you stuck in a rut, waiting for your big break every day? Well, my friend, you're not going anywhere. That's what makes you perfect to increase the indie band market! The more of your sort we have, the better.

"But how do I do it?" I hear you say. Well, it's a lot easier than you could ever imagine. I could sum it up in a couple of sentences if I'm honest, but, hey, it's not like I'm not being paid to talk to you!

The whole ideology of the perfect chart-topping indie band can be broken down into a few sections. Each of these goals must be achieved with utter perfection, or you can kiss goodbye to your 10 minutes of fame. Before we start, don't forget your guitar! Oh, you have? Never mind, I'm sure we can work something out... Ah! Here we are: a bass guitar, and a 1980s keyboard. Oh yes, retro's in! Now, where was I? 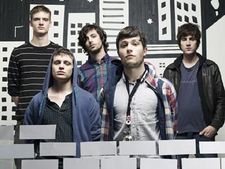 "The Maccabees". Not sure how they managed to fail... maybe it was the guy on the left?

This is without doubt the most essential element of the genre. Your band will depend on this for success. You don't even need real musical ability!

Your band must, and I mean must be one of two things. You could be of any nationality, any race, hell, you could sing in chinese, but it is utterly essential that you are either a group of lovable, lower-class cockney boys scouting for girls, or a group of lower-class northerners who don't do much, but have a vaguely unfamiliar accent, thus endearing them to you. The most essential part of it all, though, is that you are very blatantly middle-class, perhaps Oxford graduates. "But isn't that too obvious?" I hear you think. Well, in many cases it would be. If an upper-class businessman sold himself as a Death Metaller I think he'd be, somewhat, cutting his own work out. However, for some reason, in the indie band market it always works. The theory behind this is that the IQ of a nation is the IQ of its least intelligent inhabitant divided by the number of inhabitants, but, either way, we're not about the thought process,[1] we're about the end product. 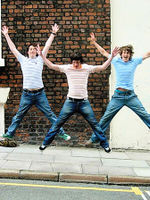 "The Wombats". Eccentricity's all well and good, but what about someone else's eccentricity?

There are a few highly successful indie bands that got there solely on lyrics. Think The Arctic Monkeys and The Wombats. These sorts of bands are usually an anomaly, but you must also focus on this area to cover all possible bases for a higher chance of success. These are the kind of lyrics you simply have to emulate / plagiarise:

See that? That's what I like to call "the perfect indie lyric". See how it all comes together? If you look carefully, you'll notice that none of the lines, together, actually form anything close to a coherent story. All there is is a vague concept behind the whole thing that allows each of the lines to rhyme and still sound like a self-deprecating cockney boy desperate to find a girlfriend. It even has a reference to Eastenders: the ultimate indie band's dream! To be in a commercially successful indie band is to aspire to being working-class with everyday problems; if only because the british public find it endearing.

Using your newfound coolness and lyric-induced repetitive strain injuries you need to start publicising yourself. Take a few pictures of your band all looking in different directions and add your band name under it: may I suggest "The What?"? No self-respecting indie band is seen nowadays without a "The" before their band name, regardless of grammar. 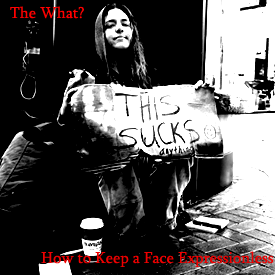 Your new album cover! That'll be 75% of your profits, please!

Now you're getting big in the world through not doing so much (see, what did I tell you? It's easy!) it's time to start actually making music. This isn't mandatory, but, like I said, we need to cover all bases if we're gonna get somewhere.

The What? - How To Keep a Face Expressionless

You can keep this tracklist as it is, if you're feeling particularly lazy, or you can change a few words in the song names. It's really beginning to scare me how no-one can tell the difference...

Now you're a hugely successful band making number 3 every week in the UK charts...