See also: HowTo:Be a Gangsta for a beginner's guide to being a gang member. 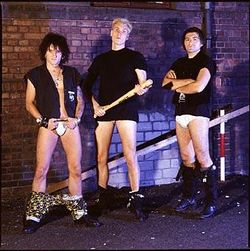 A gang is a group of three or more people that is always involved in criminal activity. This activity includes slingin' rocks, pimpin' hoes, blastin' fools, banging manz, smoking da reefa, drinking bere booze, making gun gestures with hands and shouting "BRAP!" etc. Gang members are considered to be the only people in the United States to commit crimes.

Gangs are the prolific epidemic that plagues the earth with the nonsense of claiming anything but what's truly not their own as their own. They kill and send each other to hell with gunshots that are heard well after midnight. Some gangs like to kill real people who are innocent in nature. Most gangs are the evil that churches try to eradicate on a daily basis. Some gangs are good, such as George Bush's gang and the KGB. Without them, society would crumble. Many agree that the best gang to ever exist is the Rockefeller gang, because they own the moon and the earth.

When gangs first emerged is debated, but it's certain that the United States is the only country where gangs are active. It is well-known that original gang members were Italian and bummed the hell out of prison inmates who weren't the top dogs.

Some say gangs became prominent as early as 1988, when the gangsta rap group N.W.A. released their first big album, "Straight Outta Compton". In fact, the drug "Crack Cocaine" was invented as a result of that album. Others say it was when Tupac Shakur was murdered in 1996, which inspired many Young Black Males to follow in his footsteps. But most believe gang life first became popular in 2003, when the album "Get Rich Or Die Tryin'" was released by 50 Cent.

The Grand Theft Auto series is said to be one of the biggest contributors to the increase in gang membership over the past few years. Along with G-Unit, the series has convinced young, suburban (and usually rich) males to think they can make it as a criminal by repainting their black asses every time they get the Police, Feds and Army chasing them.

Gangs are also involved in the trafficking of the potent and highly addictive hallucinogen "Marijuana", known on the street as "Mary Jane" (because people high on "Marijuana" hallucinate, often seeing a woman who calls herself Mary Jane). Recently, gangs have branched into the world of shady children's toys dealing. McDonald's free toys from the 1980s are considered the newest and most dangerous merchandise on the streets of the ghetto.

Every Color has a gang:

If a gang member is caught or convicted of committing a crime, the sentence will greatly vary, as it is dependent on race. A black person will get 10–15 years in prison for stealing a TV or grabbing a woman's ass. A Hispanic will get 5–10 years for a misdemeanor, and an Asian will typically receive 2 years. A white gang member will receive about 6 months for attempted rape or murder. 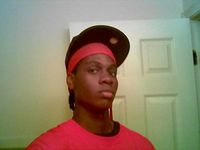 Will you go out with me?

Gang warfare occurs when two or more gangs fight each other in a way that kills as many innocent bystanders as possible. This is usually accomplished by gang members driving by in their pimped out rides and shooting at a crowd while shouting "I'm strapped man dem". Such warfare is usually started over DVD rentals or fried chicken. For instance, the biggest gang war ever, in which more than 300 people lost their lives, was between "Kool and the Gang" and "The Bloodhound Gang" over a copy of The Neverending Story, which was two days overdue.

Gangs are located around the world!, although they are almost always found in an urban setting. This includes big cities such as Los Angeles, Chicago, New York, London, Birmingham, Ottowa, Manchester and Tokyo. In general, studies have found a correlation between a city's climate and the lethality of its gangs. For example, the gangs of cities in Canada and Europe rarely commit violent crimes, and more often than not go out of their way to perform community service. On the other hand, in cities located in Africa, southeast Asia and most of Latin America, it is rare for a day to go by without at least 10 people being killed as a result of gang violence. Scientists think this can be explained by the fact that experiencing heat and humidity for an extended period of time will cause people to become more agitated, impatient and violent.