From Uncyclopedia, the content-free encyclopedia
(Redirected from SWA)
Jump to navigation Jump to search 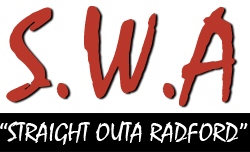 S.W.A (an initialism for Syfo's With Attitude) is an English hip hop group from Radford, England, widely considered one of the world's most dangerous rap artists of the Gangsta rap sub-genre, closely associated with N.W.A and to an extent W.W.A. The origins of the group are unknown, but legend goes that a pissed off Bengali guy had had enough with a corrupt system and attempted to fight the man, recruiting several known ASBOs and releasing songs such as "Get Your Corporate Cock Out My Ear", "Straight Outa Radford" and "'Aint Nothin' But A Cheese String".

The beginnings of a legend...[edit]

Radford-based MC and local badman Syfo Rehmehen was dropping lyrical bombshells by the age of 7. Being from a poor family, Syfo quickly became entwined in the game, hustlin' on street corners and giving head fo' bread. One day, when Syfo was spittin' some mad rhymes, an arabian battyclaaht (known as Arabian Battyclaaht) passed by, and was amazed by Syfo's poetic lines, such as: "I make your ho shoot her load when I whip out the chode" and "I take ecstacy rectally 'coz it acts more effectively". After a quickie and a short conversation, the two decided to form a rap-duo, and, since Syfo had enough attitude for two, coined the name "Syfo's With Attitude".

After realising that Arabian Battyclaaht was such a pumpilot, Syfo wanted to recruit more members. After a quick glance through his dad's phonebook, he found the numbers of tons of battymans who he could lure into a dark alley and "recruit". Dr Gay, MC Ben(Dover), DJ Likes Fellas, The D.I.C, Ben's Mum's Eazy and Ice Lube all had to walk it off.

During the East-East-Midlands/West-East-Midlands turf war of the 80s, some of the Syfo's With Attitude became hostile towards one another. Syfo, realising it was all the Jew's fault anyway, stayed true to the game and instead went forward with his solo career, releasing "Syfo Fo Life" and "Always Been Into Dudes".

In 1999, all the former members (minus Ben's Mum's Eazy after he supposedly died of a broken heart. That and AIDs), reunited for a reunion tour named 'Back up the Back Alley'. This tour was of critical success, selling out in all major southern English counties and Jew-zones. The group also returned for a special performance in Nottingham's (the birthplace of Syfo himself) very own NG1 nightclub. The tour unfortunately had to be canceled after a double booking with known bum-bandit Elton John. Infuriated, Syfo challenged Elton to a gay off, claiming it was "on". Elton died at the age of 61.

Pimps up, hoes down, im a bad boy, sneaking into yo moma's bed, like a wooden horse in troy (year boii)

But i dont need to sneak, im a rather charming geek, when i whip out my wand she'll be on it all week."

"Thanks to Syfo's workout plan, your mum gets paid to taste my wang,

Lubé thinks she likes it too much, but he only likes women when they hairy and butch

When they see me on the street they shout "Safe M8y boii, yah?", me and your mum go for distance, coz i sure skeet real far

But don't get me wrong, I'll fuck anything that moves, that means feet, claws, paws, hands or hooves."

Quoted from "Plenty of Vaseline"[edit]

"Like slick Rick, but I got a bigger dick, your time without this sausage is going TICK TICK TICK,

Like Hiroshima but with a lyrical bomb, like a Congolese native, your mum's bed is where I OM,

Like Clinton with the blow, top of the charts I go, I could run a bakery with all this dough,

Like my city gyal but I don't mind a hick, they ain't so peng but jahknows they suck dick (TRICK)"

Quoted from "Express Myself (All over your mum)"[edit]

"Call me King Bhangali, haters have to endure me, get flowers from ya'll mommas coz you know they adore me,

They's always a cat fight, to score my delight, I really like cats... and oh yeah... you shite"